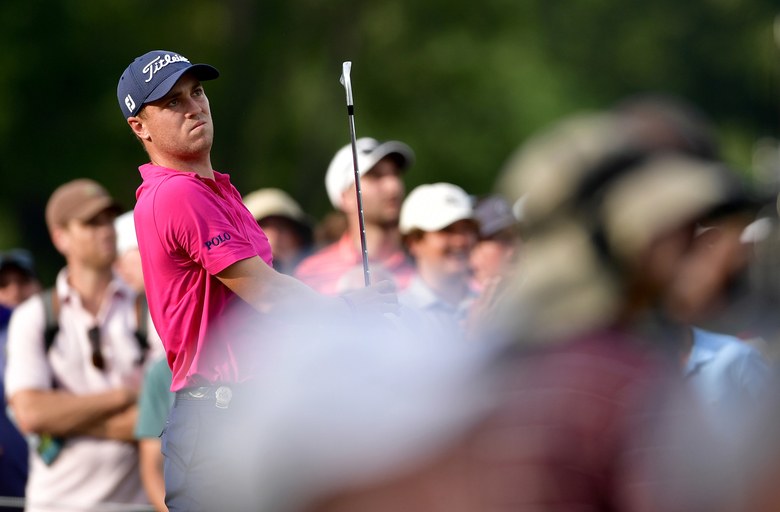 By E. Michael Johnson
In the last year I’ve had the opportunity to speak with PGA champ Justin Thomas twice about his equipment, including this morning. Here’s what he had to say about his change to a mallet putter, why he uses irons with zero offset and the changes he made to his driver setting and 60-degree wedge before the PGA Championship.

Last year you visited Scotty Cameron’s studio and walked away with the putter you won the PGA with. What was that experience like?
Anytime you go to the Studio and work with Scotty and Paul Vizanko, you learn something new every time. It’s an unbelievable experience. It’s really fun. You walk out of there with more knowledge than when you go in there. I feel like I leave having something good to work on with my putting and my mechanics. It’s not just looking at different putters. You’re looking at what putters are going to give you the best roll and bring out your best stroke, what’s the right weight. I was struggling a little bit with my stroke last year and I wanted to try something different. I just kind of picked that putter [the mallet-style Futura X5] up and it felt kinda good.

You had been playing a blade-style putter before that. Had you played mallets before?
This was a totally different look for me. I’ve used a Newport 2 style for basically my entire life. I had used a Cameron Fastback model during my year on the Web.com Tour for about 85 percent of the season but other than that it’s been a Newport 2, so it was a completely different look.

You made a couple of changes at Quail Hollow. Different wedge, put the 5-wood in instead of the 2-iron. Do you regularly adapt your set makeup to the courses you’re playing?
Absolutely. The 60-degree wedge I was using was the one I used at the British Open and I can’t think of more different conditions than Birkdale and Quail Hollow. You’re going from firm and tight turf and not really any grain over there to a little bit wet, also very tight, but grainy Bermuda grass. The other 60-degree I had was meant to dig and that wasn’t going to work at Quail Hollow. You don’t want to use the bounce when it’s that grainy. You’re just going to embarrass yourself. In terms of the 2-iron and 5-wood, that’s something I’ll change frequently, usually depending on the par 5s.

You have the new Titleist 718 MB blades. What was the process in making that switch?
It was an easy transition. Just hit some balls with them and I liked them right away. They are very similar to what I have now, but I liked the updates. They were more forgiving and I was able to hit the shots I wanted and the shot shapes I like to see.

Why do you prefer muscleback blades instead of a more forgiving club?
It looks clean at address. The feel is great, they go through the turf well, they have a good sound to them. All the irons are great but I’ve used blades most of my life. I’m hitting them well so I’m not about to change.

On your driver, it’s the Titleist 917D2 which has an adjustable hosel. How do you have that set and do you ever tinker with the settings?
I don’t change it too much but I have changed the settings at times. I’ve gone back and forth between A-1 [standard loft and lie] and D-1 [standard lie, minus .75 degrees loft]. I actually changed my setting last week at the PGA. I was hitting good drives but was just leaking it a bit to the right. So I altered the loft and felt I could see a little bit more of the face and could turn it over a little easier and not lose it to the right.

That said, it sounds like once you find something you like, you tend to stay with it?
If you’re changing it probably means you’re not hitting it well, so I don’t want to be changing equipment a lot.

You’re still a young guy, but how has your appreciation of what equipment can do for your game evolved?
Quite a bit. The guys at Titleist make it so easy on us. Anything I need they’ll do for me. Anything I want to change, they’ll help me with. Anything I’m curious about or have questions about they’re going to answer for me. I can practice all I want, but if I don’t have the right equipment for my kind of game it’s not going to mean very much. In some ways what they do for me is more important than what I do to get ready.

When you first started getting into the game, what was the first club that captured your attention to the point you said to yourself, “I really want this club?”

I remember wanting a Scotty Cameron Circle T putter really badly. I remember the first time I went to the Studio and I got to pick one out and have it customized. That was pretty cool. I actually got it lengthened and refinished a couple of years ago. It’s a very pretty and special putter to me.

Do you pay any attention to what other players are using?
I kind of do my own thing and worry about what I’m playing. Yeah, once in a while I’ll take something out of someone’s bag and take a look at it, but for the most part I’m more interested in my equipment.

A lot of your tour brethren have stampings on their wedges. You have “Radar” stamped on yours. What’s the story behind that?
It’s a funny story. I tell everyone that it’s a nickname that nobody calls me. When I was going up through the junior ranks Phillip James from Titleist I went on to California to the test center and I was hitting wedges with Mr. Vokey and P.J. and I made a couple of chip shots and hit a couple of good wedge shots and they said something about it being like a radar and P.J. refused to send me wedges going forward unless it has “Radar” on them so it kind of stuck from there.

Ever hit a persimmon driver or balata golf ball?
I actually have. Only couple of times and probably not enough to understand how much harder it is to use than what we have now. But it’s definitely a different feel.

Related: 15 Things You Need to Know About Justin Thomas

How many golf balls do you go through in a round and at the end of the week what do you do with all your extras?
It depends. If it’s a short course where you use a lot of wedges, it can be three or four. Hopefully not more than five—I don’t want to be losing any balls or taking drops. I usually go through three, though. I carry nine in my bag. Three that I use for practice putting, and the rest for competition. At the end of the week I sign them and give them to people who work the tournament like standard bearers and also fans.

What’s the most unique thing about your equipment?
Probably that my irons have absolutely no offset. They’re very customized for me. They look different from everyone else’s irons. It’s such a clean look from the shaft down to the hosel down to the clubhead. I will say that when I’m not hitting it well those 4- and 5-irons look pretty difficult to hit, but it’s a great look. I’m not sure how it started but I think it was when I picked up a set of irons about four or five years ago and said I wanted a set like that. Been using irons like that ever since.