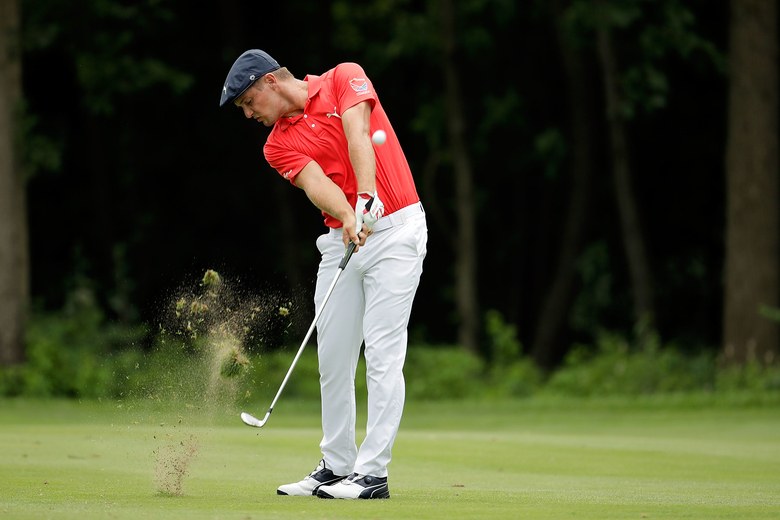 SILVIS, IL – JULY 16: Bryson DeChambeau hits his approach shot on the sixth hole during the final round of the John Deere Classic at TPC Deere Run on July 16, 2017 in Silvis, Illinois. (Photo by Andy Lyons/Getty Images)

Bryson DeChambeau won his first PGA Tour event with a Sunday charge at the John Deere Classic that culminated with a final-nine 30 to give him a 65 and one-stroke win when Patrick Rodgers bogeyed the 71st hole.

Those irons served him well on Sunday as DeChambeau gave himself plenty of birdie opportunities by hitting 17 greens in regulation (boosting his tournament mark to 79.17 percent). DeChambeau was particularly on target over the final nine where he used his Cobra King Forged One Length irons and King wedges to knock approach shots to seven, 16, 10, 10 and 14 feet (he hit the par-5 17th in two).

When DeChambeau won his first pro event on the Web.com Tour last year he boldly proclaimed that it was “the day the game changed” in regards to single-length clubs.

DeChambeau told Golf Digest at the time that, “I knew I was carrying the torch of one-length clubs, but I knew it was going to prove itself out in the end. The game is due for a change. Irons haven’t really changed in 20 years, probably more.”

The discussion and enthusiasm for single-length somewhat waned as DeChambeau’s play became spotty, leading to a string of missed cuts. But now that he is a PGA Tour winner with a two-year exemption, he—and his single-length irons—are guaranteed to be in front of golfers for a while now.

Whether that translates into a surge in single-length iron sales now that he has won the PGA Tour is worth watching.