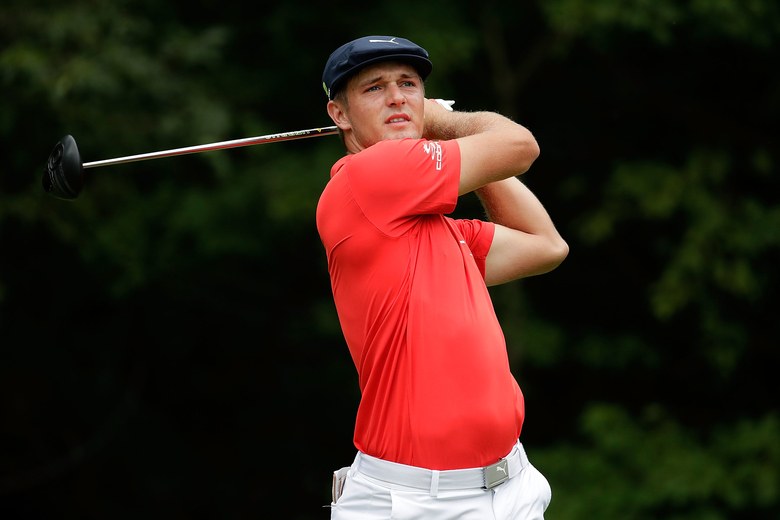 SILVIS, IL – JULY 16: Bryson DeChambeau hits his tee shot on the second hole during the final round of the John Deere Classic at TPC Deere Run on July 16, 2017 in Silvis, Illinois. (Photo by Andy Lyons/Getty Images)

Bryson DeChambeau and Patrick Rodgers were two of the top amateur players in recent memory, both of whom brought lofty expectations to the PGA Tour. And while both have had some professional success, neither had had a breakthrough victory, and on the back nine of the John Deere Classic at TPC Deere Run on Sunday, it came down to the two of them, and DeChambeau prevailed.

Entering the final round, DeChambeau, 23, was four shots behind Rodgers, and that deficit had grown by the time he reached the 10th hole at even par for the day. The 2015 U.S. Amateur champion caught fire on the home nine, making birdies on four of his next five holes to get to 16-under. After a wayward drive on the 17th, DeChambeau pulled off a 270-yard recovery shot to reach the par-5 green in two and two-putt for birdie.

Rodgers was just a few groups behind, and sitting at 18-under. DeChambeau found the green in regulation on the 18th, with a 12-foot left-to-right putt to finish at 18-under. As it neared the cup, it looked as though it would just slide by on the right side of the hole, but it caught the lip, dropped in, and DeChambeau went wild. Rodgers would go on to bogey the par-5 17th and par the 18th, giving DeChambeau his first win in his 40th start on tour.

Afterwards, DeChambeau was emotional, and pointed to the fact that the John Deere Classic was where he played one of his first few events on tour as an amateur in 2015. Winning at TPC Deere Run just two years later was a special moment, and it gets him a spot in next week’s Open Championship.

For Rodgers, the solo second matched his career best T2 finish at the 2015 Wells Fargo Championship. It was his third top 10 this season, and second top-15 finish at the John Deere Classic in his career. His Open Championship debut will have to wait.

Wesley Bryan posted one of the low rounds of the day, a seven-under 64 that featured a six-under 30 on his back nine to finish at 16-under 268. The former trick shot artist continues to impress during his strong rookie season, already having picked up his first victory at the RBC Heritage and finishing in the top 10 four times. He’ll be making his first appearance at the Open Championship next week, and just his third start in a major in his career.

Tying Bryan for third was Rick Lamb, who shot a final-round five-under 66. Lamb, 26, has made just four cuts in 14 events this season, with just one top-25 finish. His rookie season hasn’t been nearly as successful as Bryan’s, but the T3 is his best result this year.

Three-time John Deere Classic winner Steve Stricker began three-over through eight holes on Thursday, but played the remaining 64 holes in 18-under to finish in a tie for fifth. His final-round seven-under 64 earned him his second top 10 this season. The President’s Cup captain will be making his 15th appearance at the Open Championship next week at Royal Birkdale.

Zach Johnson, Jonathan Byrd and Scott Stallings also finished at 15-under in a tie for fifth.