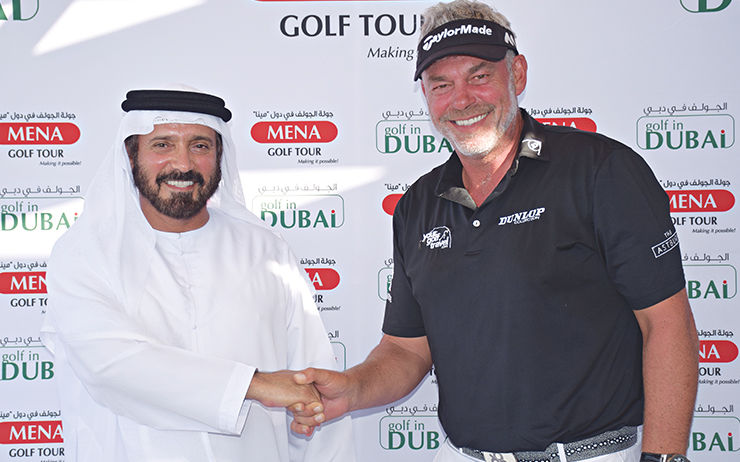 On the course the MENA Golf Tour continued to thrive and diversify in 2015. Off it, Mohamed Juma Buamaim and patron Darren Clarke made an announcement that promises even more exciting developments next year

n a landmark month for the MENA Golf Tour, patron and Ryder Cup captain Darren Clarke announced the advent of a qualifying school for 2016 that will surely be a precursor to introducing precious Official World Golf Ranking points to the circuit’s events. On the course, the tour’s growing diversity and competitive depth was further underlined by the most open and unpredictable Order of Merit battle in its history. South African Thriston Lawrence eventually ran out a comfortable winner with a $27,679 haul, beating a Spaniard (Gabriel Canizares) and a Scot (Paul Doherty) into second and third places.

A tour that had formerly been dominated by a handful of English pros now has an increasingly cosmopolitan feel. In winning the Tour Championship at the Al Ain Equestrian, Shooting and Golf Club with a superb three-round score of 15-under, Scott Campbell became the 11th different winner of the season. Meanwhile, two amateurs in James Allan and Rayhan Thomas both went close to landing maiden titles and veteran Faycal Serghini topped the region’s Order of Merit for the Shaikh Maktoum Golf Foundation award.

If this was the most progressive year yet for the MENA Golf Tour, still only five seasons old, then next year promises even more growth. As doors begin to open with more events, a Q-School and the world ranking points that will further legitimise the tour, the very real possibility of sending one or more Arab nations to compete in the Olympic Games remains the ultimate goal for 2016. “That is by far the most important thing, because it’s the only way the Arab players could make it,” said Mohamed Juma Buamaim, chairman of the MENA Golf Tour. “They’re not yet ready to make it on the Challenge Tour. So this is the only way.”

The launch of the Q-School is part of an ambitious plan to expand the schedule of the MENA Golf Tour to close to 20 events, covering new destinations like Kuwait, Egypt, Spain, South Africa and Thailand in 2016.

Calling it an exciting development, Darren Clarke, who competed in the Ras Al Khaimah Classic at Tower Links, said: “I look forward to welcoming all players and hope to see some new blood hit the front. There has been a lot of fresh talent coming up through the ranks over the last few years, but the opportunities are very limited for young professional golfers to develop and showcase their skills on a global basis,” he added.

“This is one tour which provides the springboard to gain the right competitive atmosphere to gain professional experience, especially for amateur golfers. They are the ones who hold the key to the development of the game in the region.”