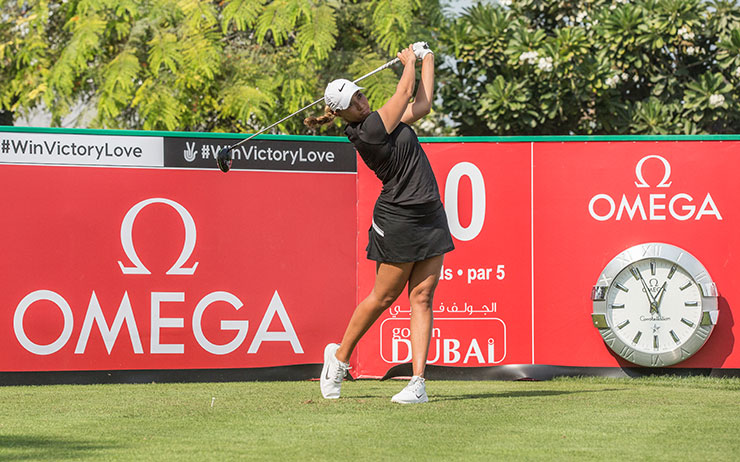 Cheyenne Woods has returned to the Omega Dubai Ladies Masters with the goal of topping her 20th place finish in 2014 but was never going to get away with focusing solely on herself.

“I knew it was coming,” Woods said in her tournament-eve press conference Tuesday as the gathered media corps sought a reaction to Tiger Woods’ welcome return at the Hero World Challenge in the Bahamas.

When the world’s most recognisable golfer is your uncle, the line of questioning is inevitable, especially given the 466 day wait to see the 14-time major champion tee it up again. It mattered not that she hadn’t spoken to the former men’s world No.1 in “maybe a month or two.”

“I was real excited to see him not only on the course but on the course playing well… That’s the Tiger we’ve all missed.” Cheyenne said.

“I think everybody was happy to see the fist pump and see Tiger making birdies and holing out bunker shots, because that’s the Tiger that we all remember. Tiger is to me the greatest golfer that’s played, and the greatest golfer in my lifetime, at least. It was really nice to be able to see him play well again.”

So, go on then, can he overhaul Jack Nicklaus’ record of 18 majors?

“ Yeah, I think…yeah. From what we saw this past week, I think Tiger definitely has many more wins in him. This next season will be really exciting to see him play, hopefully a full schedule or whatever he might put together. I think he definitely has a chance.”

The golfing world ought to know Cheyenne Woods brings reasonable form to Dubai having retained her LPGA Tour card after finishing 95th on the money list. As a Nike staff player, she also brought some new clubs with Callaway irons, driver and putter in her bag now the polo short and shoemaker has opted out of club making.

So is there any chance of a second LET title to go with your 2014 RACV Ladies Masters victory in Australia, now the attention has rightly turned to your own game?

“My year [has been] very up-and-down. I started off horrible, and it was really, really difficult to go through. After losing my card in my rookie season and having to go back to Q School, in this last season I started out really rough,” she said.

“I kind of had to pick myself back up, and I finished the year off really strong. I had one top-10 [6th in Portland] and I really saw my game come together in the second half of the season, which was encouraging. So it gave me faith in myself and faith in my game, that I’m able to be out there and compete,. So my goal is to finish the year off strong and I’m really excited for next season now.”

The media chit-chat tapped danced back and forth between the game’s of uncle and niece throughout the presser which begged the question – don’t you tire of the association game?

“I guess you could see it as a blessing and a curse, but for me it’s all I’ve ever known. I mean, since I was 10 years old, I’ve had this. This is kind of what comes with the territory of playing golf for me,” she said.

“But I mean, I wouldn’t trade it for anything. I love being able to have Tiger as my uncle and have that resource of knowledge and that inspiration to look up to. You do have the added attention. But because I’ve had it for so long, I’ve sort of grown used to it, and you try to block it out and you figure out how to deal with it eventually.”