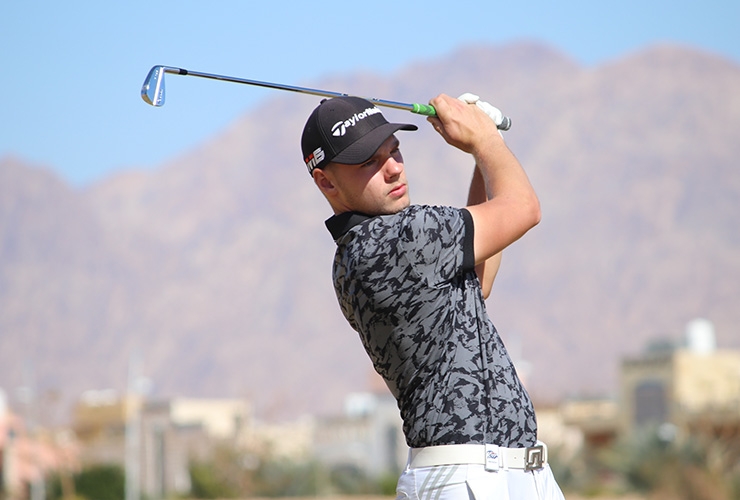 By Kent Gray
Curtis Knipes might have missed the cut at the 148th Open Championship by eight shots but there were clearly no psychological scars from his dream week at Royal Portrush last July. Quite the reserve it seems.

Having qualified as an amateur, the English teen’s simmering plans to turn pro were only emboldened after rounds of 72-79 for a +9 total left him in a tie with, among others, Masters champion Adam Scott, a solitary shot shy of Phil Mickelson and a shot better than another former Open winner, Tom Lehman.

“Playing the Open Championship gave me a lot of confidence that I can compete with the best,” Knipes said ahead of the 9th MENA Tour by Arena season a fortnight ago.

Fast-forward to Wednesday at the $75,000 NEWGIZA Open on the outskirts of Cairo and Knipes continued to walk the bold talk. A second-round 68 moved the 19-year-old to -10 at the second event of the new regional development circuit season, a shot clear of countryman Bailey Gill who roared up to solo second with a fine seven-under-par 65.

After earning amateur honours in three MENA Tour events last season to finish runner-up to Dubai 15-year-old Josh Hill in the season-long Journey to Jordan, Knipes now has pole-position to seal what would be a wire-to-wire his maiden victory in just his second start as a professional.

“Tomorrow is obviously a big day for me. First time leading the MENA Tour and being in the final group of the day. I will just try and approach it as I have done every other day. I can’t control what others are doing. I am just going to go out there and shoot the lowest round that I can.”

It’s would be the stuff dreams, a priceless confidence boost worth far more than the winner’s cheque, not that Knipes would sniff at a cool $13,500. But he isn’t there yet, even if he’s recorded just one bogey in his last 36 holes and is a collective 14-under-par for his last four rounds.

Swede Niclas Weiland and Frenchman Sébastien Gros will start Thursday’s final round just two strokes adrift of Knipes and Weiland has the advantage of knowing what it takes to win on the MENA Tour after capturing the Ras Al Khaimah Open late last year.

Just four back in a gaggle of four players in a share of 6th place is Englishman David Langley who won last week’s season-opening Journey to Jordan #1 Championship. At -5, five off the lead, two-time MENA Tour winner Luke Joy can’t be discounted either.