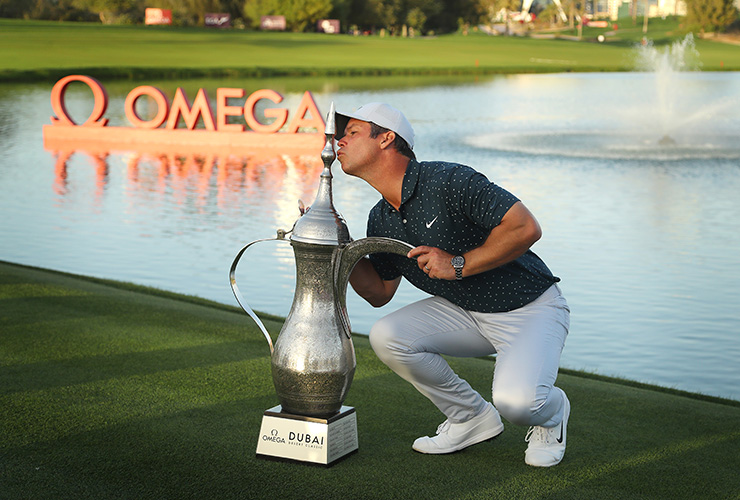 By Kent Gray
After capturing the ‘Major of the Middle East’, Paul Casey’s name is again firmly back in the ‘best player not to win (an actual) major’ conversation. It’s a good thing then that the 43-year-old Englishman feels like a kid again.

With a closing 70 full of split fairways, flushed irons and quality putting when there was just the faintest hint of late Sunday afternoon wobble, Casey added his name to the quality roll call of OMEGA Dubai Desert Classic champions.

With a 17-under total of 271, the world No. 27 snared the Dallah by four strokes from South African Brandon Stone while Scottish lefty Robert MacIntyre was left to settle for third at -12 after a brutal afternoon on the Majlis’ unusually tricky greens.

Casey’s 15th European Tour win saw him edge ahead of luminaries such as Rory McIlroy and Greg Norman and up alongside Thomas Bjorn and Padraig Harrington in joint 16th place on the Old World circuit’s list of all-time winners. He also joined McIlroy, Ernie Els and Henrik Stenson atop the list of most wins in the Middle East. His fourth title, after wins in Bahrain (2011) and Abu Dhabi (2007 and 2009), is perhaps the sweetest of them all.

“I’m all emotional with wins, but with this one, you said it, this one is such a prestigious event, the history which is behind you, and I can see it from here with amazing winners, is basically a Who’s Who in world golf. Dubai have given so much to golf, European Tour golf in general and across the globe.

Likely to be around 15 in the OWGR come Monday, suddenly Casey suddenly finds himself in contention to represent Team GB at the summer Olympics if the Tokyo Games go ahead, a big ‘if’ admittedly. He’s also taken a huge jump in the Race to Dubai (to third) and Ryder Cup rankings to the point where he is looking a lock for September’s matches at Whistling Straits even if he says there’s “still a lot of golf to be played”.

The elephant in the room remains a major but his 21st worldwide win on Sunday is proof enough that Casey has the effortless power, and undying ambition, to convert in a big someday soon.

With a win this early in the season, what do you think you are capable of going forward? 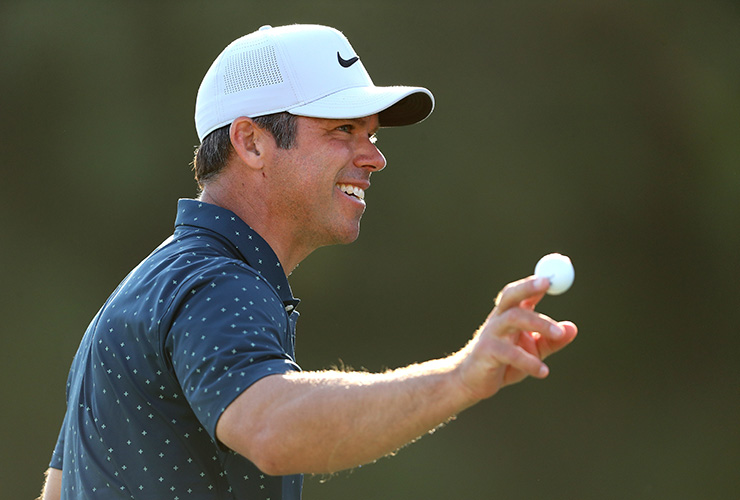 Warren Little/Getty Images
Casey acknowledges the gallery after his gritty par save on 16th during the final round on Sunday.

“I think a lof of good stuff, honestly I feel like I’ve regained my youth. I mean that sincerely and, yeah, I’m so happy,” said Casey who has 10 top-10s in major championships including a runner-up finish to Collin Morikawa as recently as last August’s PGA Championship at TPC Harding Park in San Francisco.

But the majors are for later. Right now, Casey is in a happy and very fortunate place.

“Seve. My heros,” Casey started as he surveyed the names on the Dallah. “Yeah, it’s one of the coolest trophies in golf, isn’t it. There are smaller, there are more important, but it’s one of the iconic trophies without a doubt, and yeah, look, being in the winner’s circle always feels amazing.

“I think the whole of 2020 has been very strange, still is very strange, and I’m very, very thankful to be able to do what I do and still be out here playing golf. We had some fans this week. They were amazing. Obviously not a lot because we’re still in the middle of a pandemic, but look, myself, just like a lot of other people, it’s not been enjoyable.  So to have something like this happen, hopefully, that can bring happiness to other people, as well.”

Casey is especially chuffed for caddie John McLaren who he revealed is in the sixth year of a five-year commitment to get the Englishman back into the top echelon of world golf.

“I can’t thank him enough because he’s came back for a sixth. I said to him, come back only if you want to and we talked it out, and like I said to you earlier this week, I have the biggest respect for that guy. He’s my mate more than he is my caddie.”

For a good portion of Sunday, it looked as though Casey might challenge Bryson DeChambeau’s record for the biggest winning margin at Emirates Golf Club – seven strokes set two years ago. He led by as many as five shots courtesy of solid shot-making and another piece of wedge wizardry when he outrageously holed out for a birdie on the par-3 4th from lush rough.

The irons shots he struck into 13 to set up a two-putt birdie and into 14 were sublime but not half as important as the gutsy 13-footer he holed for bogey when catastrophe loomed from short-sided hay on the 15th, nor a similarly gritty “clean up” par on 16 after his drive found another lush lie. 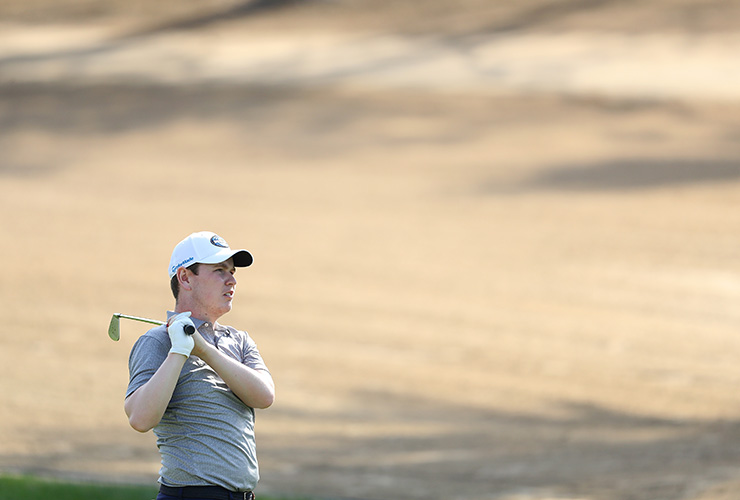 But Casey was not to be denied, not after MacIntyre cruelly watched an 18-inch putt go in and then horse-shoe out on the 8th in a horror run for four successive bogeys that put the kybosh on what was shaping as a private match for the Desert Swing title.

Talking of matches, we noticed that embrace with European Ryder Cup captain Pádraig Harrington who hung around after his impressive tie for 6th. Do you think that’s cemented your place on the team for Wisconsin?

“No, no, no. There is a long way to go. There is a lot of golf to be played,” he said. “I was quoted this week as saying that Paris [2018] might be the greatest golfing experience I ever had. I think I can take the “might” out. It was the greatest golfing experience I’ve ever had. And I would love to be part of his team, and if I’m not playing, I’d still love to be part of that team and help.

“Yeah, Ryder Cups are something special. There’s a long way to go, though. Got a lot of golf to play and need to keep this form up.”

On the evidence of this week, It’s going to be a lot of fun if he does.