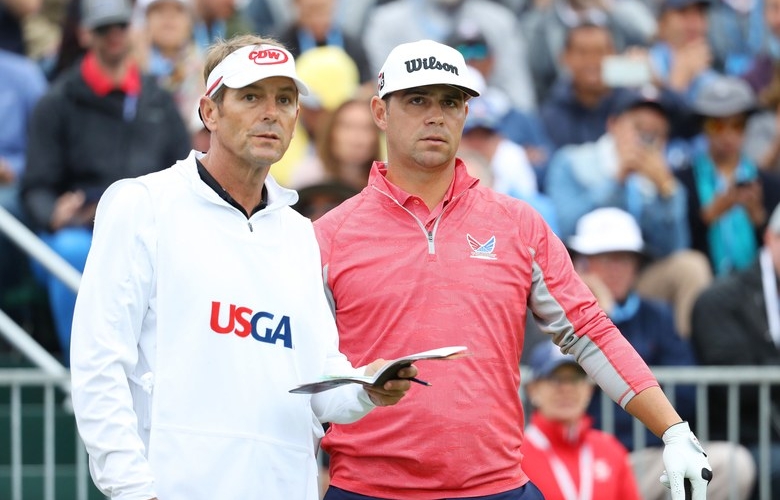 Warren Little
Gary Woodland and caddie, Brennan Little look on from the 18th hole during the final round of the 2019 U.S. Open.

By Brian Wacker
It has been quite a week for Gary Woodland, from winning his first career major on Sunday at the U.S. Open, to a whirlwind media blitz that included a very cool visit with the inspirational Amy Bockerstette.

Woodland’s caddie Brennan Little, meanwhile, isn’t doing too bad, either. He took home a nice percentage from the record winner’s paycheck of $2.25 million and it was the veteran looper’s second time being on the bag of a major winner.

The previous triumph was in 2003 when his fellow Canadian, Mike Weir, won the Masters. While Weir handled various obligations immediately following the victory, Little said he went back out on the golf course and played the first hole at Augusta National in the dark—using Weir’s lefty sticks.

“This celebration was a little different,” laughed Little, who was on the bag for eight of Weir’s career wins, two of Woodland’s and has also caddied for Sean O’Hair and Camilo Villegas in a career that began in 1999.

Instead of sneaking out to take a few shots on Pebble’s 18th hole, though, Little chilled out in the Tap Room, the Pebble Beach Resort’s famed haunt, along with Woodland and a number of other players who stuck around, including Jordan Spieth. Little then caught a flight home from San Francisco on Monday night to make it to Dallas in time for his 9-year-old son’s Little League playoff game on Tuesday morning.

We spoke to the 49-year-old veteran caddie about Woodland’s best shot of the week, his chip from on the putting green at 17 and more.

Gary’s second shot at the par-5 14th on Sunday will go down in major championship lore. Take us through that discussion to go for it.
It was 260 to cover the front so it was either a 3-iron or a 3-wood, but you couldn’t bounce a 3-iron up there. And leaving it short wasn’t really a great option either because then he would have had 80 or 90 yards in and that’s not an easy shot there because the hole plays uphill. You can’t see the green really, and a wedge in that situation could easily spin back off the green. Missing right wouldn’t have been good. Long and left was OK, though. The way he played it was perfect, and it played out that way.

What about the wedge from on the putting green at 17?
He couldn’t putt it, really. If he hit it perfectly through the fringe, the best he could’ve done was maybe hit it to 10 feet. He actually had the same shot on Friday and did the same thing when the pin was back right, and he used to practice chipping from greens when he worked with Randy Smith. Let’s face it, though, it’s not an easy shot. If he hits it too hard it’s going to roll off the green and maybe into the rough because the hill slopes that way. But he clipped it perfectly.

RELATED: Pebble brings the best out in Woodland—and the U.S. Open

How would you describe your relationship with Gary?
It’s great because he’s easy to get along with. He has a low-key personality and doesn’t get riled up over much. We also have a lot of similar interests— sports mostly.

Big week for you then, with the Toronto Raptors winning their first NBA title. And you’re a St. Louis Blues fan, too?
Well, I’m a Dallas Stars fan. But my buddy [Doug Armstrong] is the GM for the Blues, so I was rooting for them. I’ve been getting a lot of crap about it from my friends, though. I’m not much of a basketball guy but was following the Raptors through the playoffs. That was fun.

What are you going to do with the flag? Have you spent any time with the trophy yet?
I’ll get it framed eventually. I do that with all the ones from the tournaments we’ve won. I’ve got a really nice display at home. The trophy, I got to spend time with it on Sunday night a little bit, and I’m sure I’ll get to bring it here at some point but I don’t know how much I’ll drink from it. I’m getting a little old for all of that.