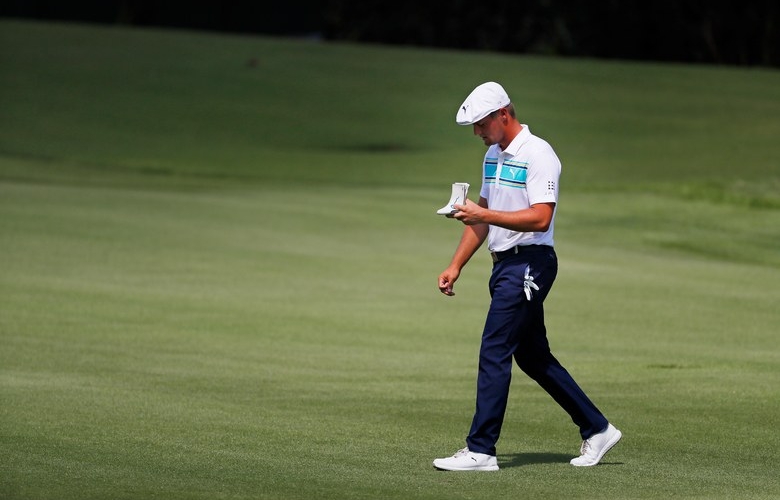 By Joel Beall
ATLANTA — Bryson DeChambeau is not just zealous in his methods. He needs your belief, too. Anything that runs counter to this ideology conjures fire-and-brimstone from the pulpit.

DeChambeau’s latest sermon came at the Northern Trust after two videos emerged of the 25-year-old taking an inordinate amount of time over a pair of short-game shots, videos that stirred a social-media storm. DeChambeau went on the offensive, first seeking out Brooks Koepka for perceived knocks, then to the media regarding slow-play accusations.

“You look at all the guys on social media and saying, ‘you need to pick it up, you need to pick it up.’ I’m just trying to explain to them, and say, hey, how about you look at the full story and see what actually happened during those instances,” DeChambeau said. “I’m not about to let my reputation be known as a slow player. I just don’t appreciate that.”

He explained that, if critics would take the time to clock him, they’d see his pace is fine.

“On average, my shots into the green and off the tee was around 30 seconds. That’s 10 seconds under [the required time], you know,” DeChambeau said at Liberty National. “And if you go to the putting green, let’s say it takes 50 seconds. That equals out and you’re approximately on time.”

So we accepted Bryson’s challenge, which is why we timed him at the Tour Championship Thursday morning.

On the rules, many—including tour players—believe pace-of-play dictates a 40-second limit per shot. In reality, the PGA Tour allows 50 seconds for:

Next, this week’s venue and tournament. As noted by Rory McIlroy, Brooks Koepka, Justin Thomas and others, East Lake is as simple and straightforward a test as the tour sees. It’s not a pushover, especially when a wayward drive buries in the Bermudagrass rough. Conversely, there aren’t many train-wreck opportunities or spots prone to traffic jams. With just 30 players in the field split into 15 twosomes, the pace should be brisk. The first tee time on Thursday, Lucas Glover and Jason Kokrak, got around East Lake in three hours.

DeChambeau was scheduled for a 12:05 p.m. starting time, the third group off for the day, with Chez Reavie, who falls on the faster side of the pace spectrum. In the aggregate, these factors should facilitate a swift walk around Bobby Jones’ former home course. With this in mind, we followed DeChambeau on the front nine to see how he fared.

Tee Box
You would have no idea DeChambeau is a slow-play lightning rod based on his drives. He is relatively efficient on the tee box; aside from a minute deliberation at the ninth, he mostly played in 25-30 seconds, from ball in the ground to contact. His tee-shot time took an average of 31.58 seconds, just four seconds slower than Reavie (27.52).

Which checks out: the front side is right in front of you. East Lake doesn’t require much strategy—save from the practice and pre-round game-planning. Our only note in this area: DeChambeau has asserted he walks faster to his ball than other players, which should bank him more pre-shot time. That wasn’t the case on Thursday, as DeChambeau strolled next to Reavie stride-for-stride save for two occasions. Let’s chalk this up to the limited field and a bigger sense of latitude given its the Tour Championship.

Approaches
This comes with a caveat. DeChambeau was often the second player to hit, his drives a good 30 to 40 yards farther than Reavie. As such, he often had a generous amount of prep that wasn’t clocked (we didn’t time him during Reavie’s setup and shot). Even with the asterisk, DeChambeau’s average time of 43.57 seconds is more nuanced than the number conveys.

Almost half his approaches took less than 30 seconds, with a personal-best of 20.34 seconds at the par-4 eighth. However, there was no middle ground. If he wasn’t pulling the trig fast, it was a drawn-out process, even on a punch-out at the fifth (one minute, nine seconds) that went all of 30 yards. Aside from the third hole, there wasn’t much wind to calculate, and DeChambeau mostly kept his ball out of trouble. That he spent more than 40 seconds in three instances, including the punch-out, after waiting on Reavie (37.82 seconds average on approach) was somewhat odd. Although it did lead to this gem from a marshal on the fifth: “He’s trying to make Thanksgiving dinner when all he needs is a PB&J.”

For those wondering how he spent these seconds, most were in consultation with caddie Tim Tucker on the greens book. 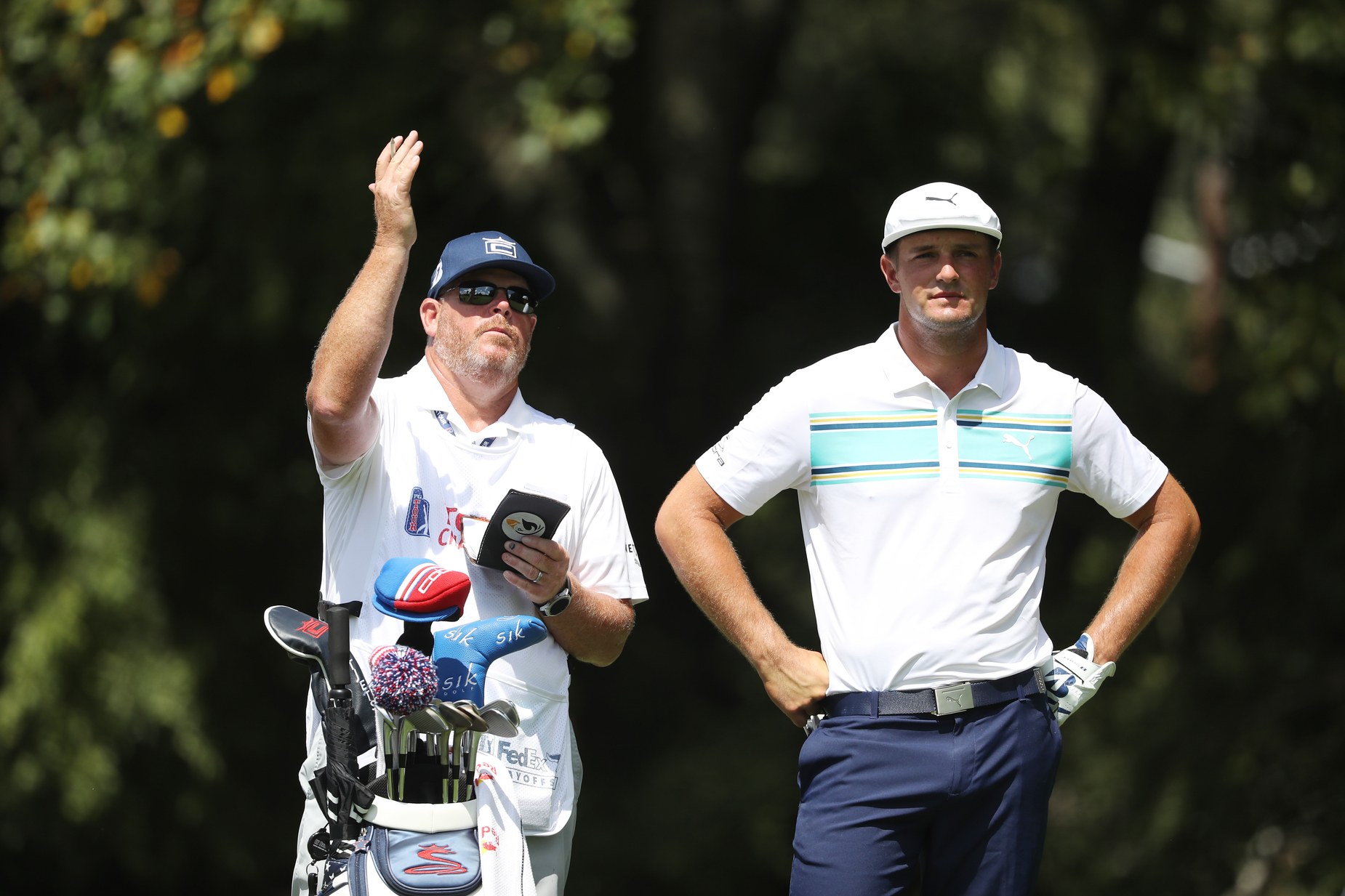 50 yards and in
The average—46.89 seconds—didn’t feel sluggish. About half this time was running up to a green and checking its contours. Once he had a club in hand, DeChambeau was ready. He actually beat Reavie in this regard (51.75 seconds).

Unfortunately, the same could not be said once reaching the green …

Putting
In case you’re reading this, Brooks, avert your eyes. DeChambeau averaged one minute and 21 seconds per first putt. Most of the time, DeChambeau was the first to stroke, but even when he was closer to the hole than Reavie (49.41 seconds), he wasn’t playing like he had dinner plans.

The longest time came on the ninth green. Facing a 36-foot uphill birdie putt, DeChambeau took two minutes and 41 seconds from marking his ball to contact. His putt went six feet by, and even though he watched Reavie for 50 seconds, it didn’t appear like he started to look at his comeback line until after Reavie’s birdie attempt was struck. Another minute ensued before DeChambeau was off the green.

Following the Brooks-Bryson fallout, the PGA Tour issued a statement that it was looking into pace-of-play solutions. “The tour’s current pace-of-play policy only addresses players whose groups have fallen out of position,” read the note. “The tour is now exploring whether to expand its policy to also address players whose groups are in position, but who take an excessive amount of time to hit a shot.”

If that theoretical shot clock existed, DeChambeau would have racked up 10 over-50-second violations through his first nine holes, 14 if the bar was 40 seconds.

After the Northern Trust, DeChambeau welcomed possible penalization. “I am not opposed to it one bit, because if it is my issue and I’m taking too long a time, absolutely penalise me,” he said. “I’ve got no issue with that. That may come as a shock to a lot of people, but I’m okay with that because it’s my fault, if it’s warranted, and that’s where we’ve got to talk about that and see what happened and when we are timing and how things are going along.”

By our calculations, DeChambeau might want to rethink that mindset.