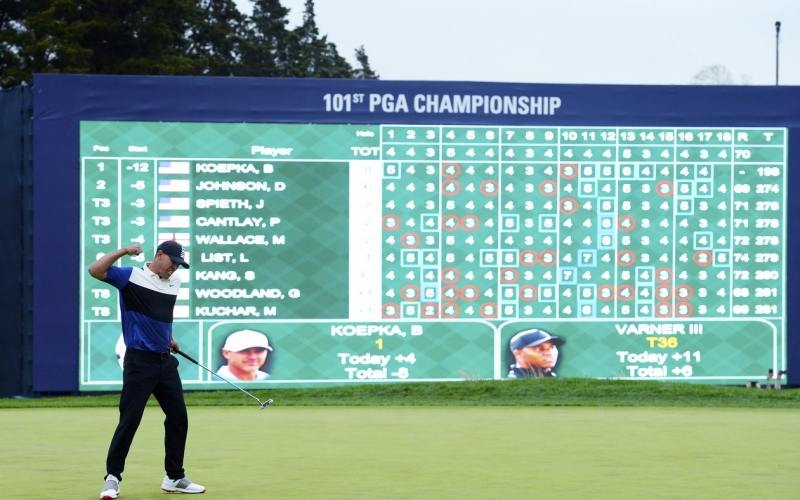 By Dave Shedloski
FARMINGDALE, N.Y. — For a few awkward moments on Sunday at wind-swept Bethpage Black, Brooks Koepka appeared headed toward making the kind of history that he neither wanted nor would anyone have expected.

After three days of appearing impervious to pressure and unperturbed by the unforgiving tapestry that had beguiled his fellow competitors, the resolute and muscular golfer began unravelling like a $3 souvenir t-shirt. His only saving graces were a seven-shot lead he enjoyed at the start of the day and a late hiccup by his only challenger, World No. 1 (and good friend) Dustin Johnson.

In the end, Koepka had just enough cushion and certitude to hang on to successfully defend his PGA title and register the kind of historic result that had appeared a fait accompli when he opened the championship with an impeccable 63 on Thursday. It wasn’t the prettiest or most poetic performance in the final round, but his four-over 74 was adequate to deliver his fourth major victory in his last eight starts—an authoritative statement even if his finish was not.

“I don’t think I would have dreamed this,” said Koepka, who finished at eight-under 272, and with the wire-to-wire victory put an indelible mark on the game (not to mention everyone on notice) that he is the best player in the world, a distinction he holds unequivocally by surpassing Johnson as No. 1 in the Official World Golf Ranking.

Indeed, Koepka is on a roll with historic implications. Consider some of the iconic names with which he shares distinction.

With four wins in his last eight major starts, the 29-year-old joins Tiger Woods, Jack Nicklaus and Ben Hogan as the only men in the modern era to win four or more majors in a span of just eight starts.

“I mean, four of eight, I like the way that sounds,” he said with a wide smile.

Koepka became just the sixth player since Arnold Palmer in 1962 to win a major championship in three consecutive years. The others are Nicklaus, Woods, Tom Watson and Phil Mickelson. What’s more, Koepka joined Nicklaus, Woods and Seve Ballesteros as the only players to have won two different major titles multiple times before age 30.

And just to throw around a few more classic names from the past, Koepka is only the fourth player to successfully defend a major championship title more than once. The others are Woods, Bobby Jones and Walter Hagen. How about that company? 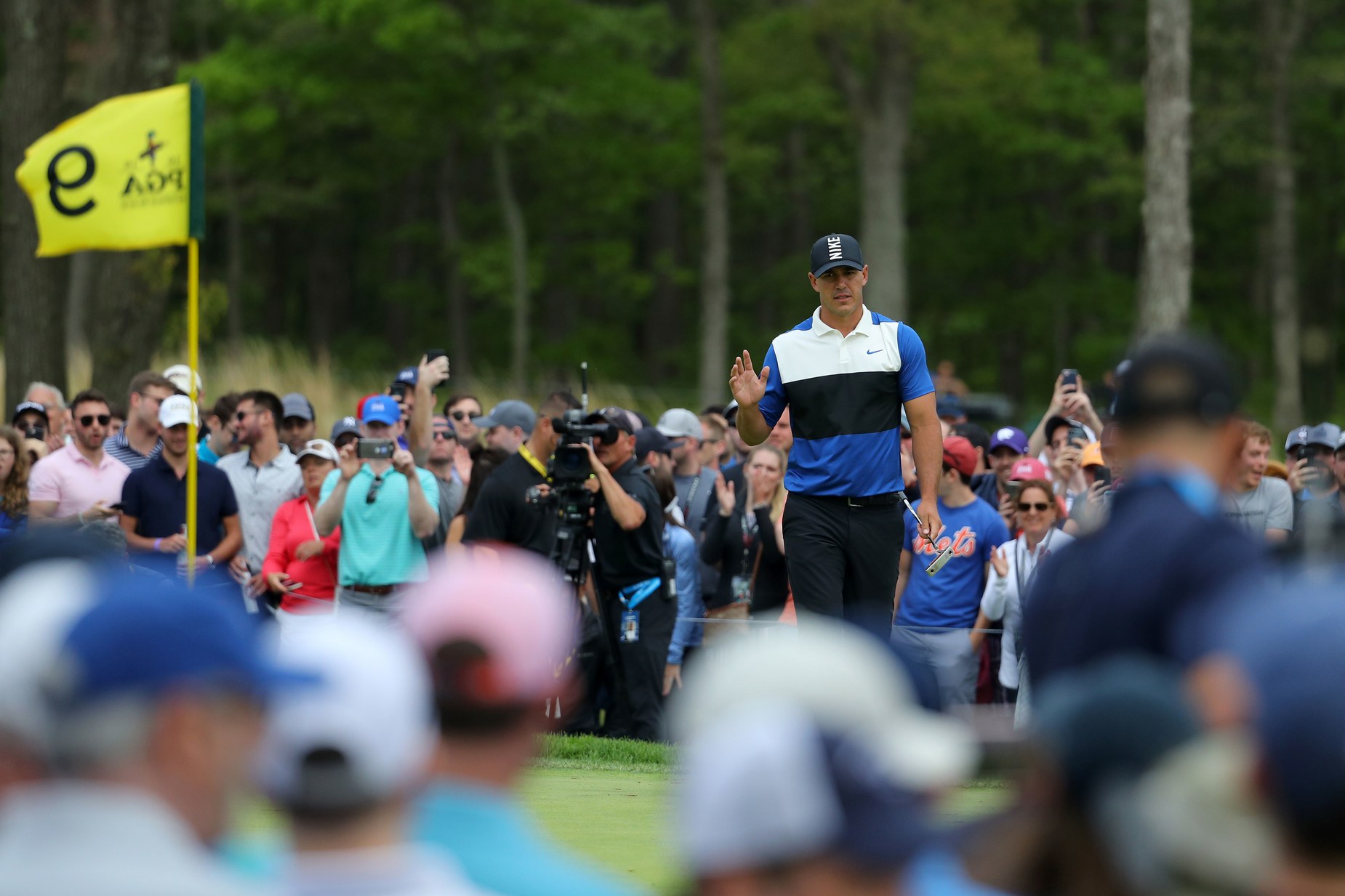 Where Koepka stands alone is his distinction as the first man to hold back-to-back major titles concurrently, having also won the 2017 and ’18 U.S. Open. When he ventures to Pebble Beach Golf Links next month for the U.S. Open, he’ll attempt to equal Willie Anderson’s mark of three straight national titles, a record set 114 years ago.

That conversation had to be shelved briefly when Koepka bogeyed his fourth straight hole at the par-3 14th, and saw his lead over a charging Johnson dwindle to a stroke. Had he gone on to lose, Koepka would have surrendered the largest 54-hole lead in major-championship history.

“I was in shock,” he said. “I was shocked at what was happening. It was very, very stressful, the last hour and a half of that round.”

That’s when the boisterous New York crowd unintentionally spurred him on and at the same time his good friend Johnson declined to step through the door that Koepka was opening.

Under leaden skies and with the heavy gusts adding yet more menace to the irascible Black Course—the field scoring average ballooned to 73.439 and the best round of the day was a mere two-under 68—Johnson stood three under par on the day and eight under overall after an 11-foot birdie putt at the par-4 15th hole. As Koepka was cleaning up a mess on 14, chants of “D-J” were ringing in his ears.

The man who uses every perceived slight to his advantage liked it.

“It’s New York. What do you expect, when you’re half-choking it away?” he said with a wry grin. “I think I kind of deserved it. You’re going to rattle off four [bogeys] in a row and it looks like you’re going to lose it; I’ve been to sporting events in New York. I know how it goes.”

But the chants came at just the right time. Everything crystallised for him. “I think it actually helped. It was at a perfect time because I was just thinking, OK, all right. I’ve got everybody against me. Let’s go.” The threat ended rather meekly. Johnson, who scored his eighth top-five finish in a major and second straight runner-up, bogeyed 16 and 17 with wayward irons and settled for a one-under 69—the only player in the field to break par all four rounds. The first of those bogeys really hurt.

“Just the last three holes is what got me,” Johnson said. “Standing on 16 fairway, I’m at eight under, and hit two really good shots there on 16, and I still don’t know how my ball went over the green there. Obviously not a spot where you can go.”

Koepka, two groups behind, held it together just long enough, with pars on three of his last four holes. He won by two strokes and let out a huge sigh as he tightly hugged his caddie, Ricky Elliott. Koepka joined Nicklaus, Ray Floyd, Hal Sutton and Bobby Nichols as wire-to-wire PGA winners with the outright lead each day. He is the seventh back-to-back winner in the championship’s history.

“It was definitely a test,” Koepka said after winning his sixth PGA Tour title. “I never thought about failing. I was trying my butt off. If I would have bogeyed all the way in, you know, I still would have looked at it as I tried my hardest. That’s all I can do. Sometimes that’s all you’ve got.”

What he’s got right now is a dominant run that he hopes to extend when he ventures to Pebble Beach. On Saturday, Koepka claimed that his heart rate barely changed on the golf course compared to if he were just lounging on the sofa. Weathering the storm at Bethpage Black is only going to make the Florida fighter that much more difficult to beat.

Because he thoroughly embraced the hardship, the difficulty of the layout and the pressure that was ratcheting ever higher as he struggled.

“Today was definitely the most satisfying out of all of them for how stressful that round was; how stressful DJ made that,” he said. “I know for a fact, that was the most excited I’ve ever been in my life ever there on 18.

“It’s been so much fun these last, what is it, two years, it’s pretty close to two years. It’s incredible,” he added. “I don’t think I even thought I was going to do it that fast. I don’t think anybody did, and to be standing here today with four majors, it’s mind-blowing.”

And it’s blowing away the rest of golf.