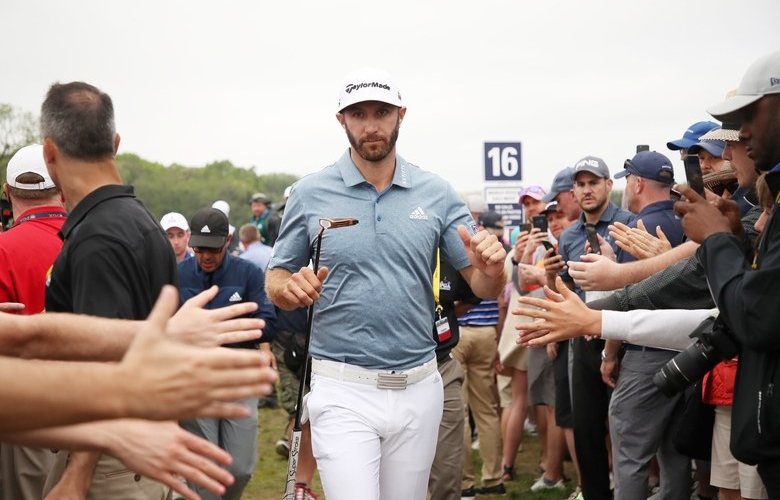 Christian Petersen/PGA of America
Dustin Johnson walks from the 16th green during the final round of the 2019 PGA Championship.

By Alex Myers
FARMINGDALE, N.Y. — Did Dustin Johnson let another major championship slip away? Is it even fair to ask that of a golfer who began the final round a full touchdown (e.g. seven points/strokes) behind? These are questions that were being asked in the aftermath of yet another close call for Johnson in one of golf’s biggest events. But the World No. 1 was wondering about something else: What the heck happened on the 16th hole?

Still trailing by six shots deep into his Sunday back nine at Bethpage Black, Johnson somehow clawed to within one with a rare birdie at No. 15. Well, rare for anyone not named Dustin Johnson, who managed to birdie one of the toughest par 4s in the world all four days. With Brooks Koepka suddenly hopping on one of the most unlikely bogey trains ever, Johnson was now within striking range on the 16th fairway at the 2019 PGA Championship. He fired an approach shot at the flagstick and … huh?

“I still don’t know how my ball went over the green there,” Johnson said after.

Whether the gusty wind that wreaked havoc at Bethpage Black on Sunday laid down or the adrenaline running through Johnson’s body picked up, Johnson wound up in a nearly impossible spot. He hit a nice pitch, but his eight-foot par putt was low all the way. Another deep approach on No. 17 led to another failed up and down, and suddenly he was on a bogey train headed to another disappointing finish. A wild par save from the gallery left of the green on 18 gave him a 69—the lone score of par or better in the final 12 groups—but he settled for second place. Again.

“It was a lot of fun,” said Johnson, who finished two shots behind Koepka. “You know, it’s why we play golf, is to be in these kinds of situations. And you know, for me, yeah, I had a great time out there today, even in these tough conditions. I gave it a good shot.”

Considering Johnson was the only player to shoot under par all four days, he certainly did. But it was another case of his good not being quite good enough. This marked the second consecutive major at which Johnson has finished runner-up and he now has four seconds at majors in his career to go along with that lone title at the 2016 U.S. Open. And that doesn’t include the controversial bunker penalty on the 72nd hole that knocked him out of a playoff at the 2010 PGA Championship.

In a way, it seemed fitting that a player who has let some golden opportunities slip away might steal a second major. The golf gods appeared like they might be evening things out, but it wasn’t to be. Afterward, however, Johnson remained upbeat about the state of his game. And he insisted the shot that killed his momentum was a good one.

“I had 194 hole,” he explained. “You know, wind was howling in my face a little bit off the right. I actually almost went back and grabbed — I hit a 5-iron, but almost went back and got a 4-iron because I didn’t think the 5 was going to even come close, based on the shots that I’ve hit, earlier in the round, into the wind. The wind was just really eating the ball up when you’re hitting it into it. Yeah, I mean, so I tried to hit kind of like just a little low draw. Hit the shot I wanted to right at the flag. Just I don’t know how it flew 200 yards into the wind like that.”

Of course, there’s the added element that Johnson and Koepka are good friends, but fierce competitors. So while Johnson said he is “very happy” for the man who has won four of his past eight major starts, when asked who the best player in the world is, he responded, “I’m pretty sure I’m still ranked No. 1, so I’d pick myself.”

Sorry, DJ, but that’s another miscalculation. Brooks actually walked away from Bethpage Black with that title, too.