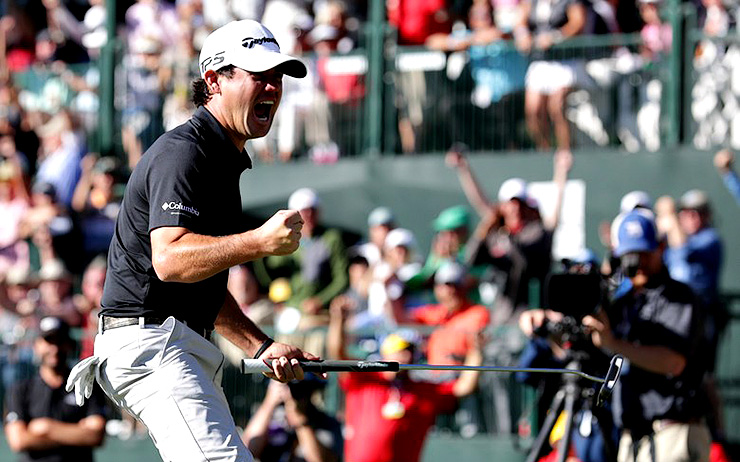 WILMINGTON, NC – MAY 7: Brian Harman reacts after putting for birdie on the 18th hole to win the Wells Fargo Championship at Eagle Point Golf Club on May 7, 2017 in Wilmington, North Carolina. (Photo by Streeter Lecka/Getty Images)

When Dustin Johnson and Pat Perez holed birdie putts on the 18th hole to get into the clubhouse at nine-under par, and Jon Rahm lurked just one shot back a few holes away, it looked like the Wells Fargo Championship was headed for a playoff. Brian Harman had other ideas.

The 5-foot-7, 150-pound lefty made birdies on his final two holes to shoot a four-under 68 (10 under for the tournament), giving him his second win on the PGA Tour, the first coming at the 2014 John Deere Classic.

Harman, 30, played the par-5 18th at Eagle Point Golf Club aggressively, going for the green in two. His second shot leaked left, giving him a testy chip out of thick rough for his third. He left that 28 feet short, leaving him two putts to secure a spot in a potential playoff. He hit a perfect putt that rolled in the center of the cup to give him the outright lead that became a victory a few minutes later when Rahm failed to make an eagle pitch from behind the 18th green.

While it seems like the triumphant week came out of nowhere, Harman has put together a solid season. Prior to the Wells Fargo, he had top-10s at the Farmers Insurance Open, the RBC Heritage, and the CareerBuilder Challenge back in late January. He’d already amassed more than $1.1 million on the season, and will see that number double after this week. The win gets the Georgia native back into the Masters next year for only the second time in his career.

Despite making the cut on the number, world No. 1 Dustin Johnson still found himself near the top of the leaderboard late on Sunday thanks to a five-under 67. His round was highlighted by a 13-foot putt on the 18th to get to nine under and in the clubhouse lead. It would end up being one shot short, ending his streak of victories at three.

Pat Perez, who provided one of the highlights of the day, also finished one stroke short of a possible second victory of the season after carding a four-under 68. After appearing to knock himself out of contention with a double bogey on the par-4 14th, Perez gamely came back with two birdies on his way in to match Johnson’s nine under total. It was his fifth top-10 finish of the season and will keep him in the top-10 in the FedEx Cup Standings.