Brendon Todd beats the weather and the course, and four other takeaways from Day 3 of the Travelers Championship 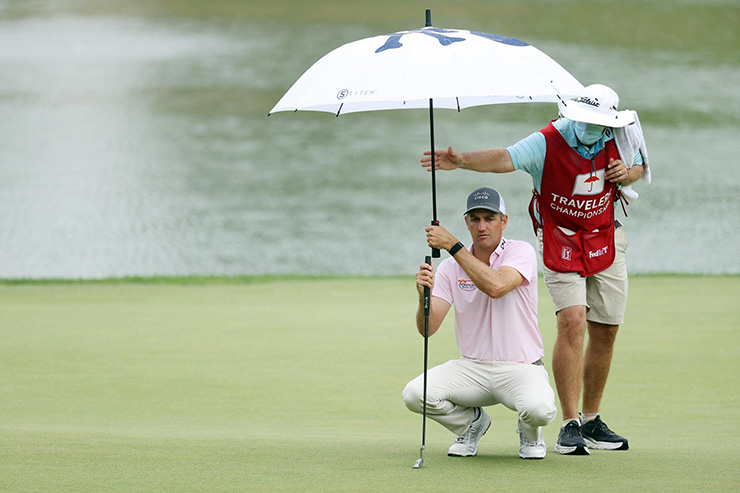 Brendon Todd lines up a putt on the 17th green during the third round of the Travelers Championship at TPC River Highlands. (Maddie Meyer)

By John Strege
On what is called moving day for an entirely different reason, the PGA Tour moved up third-round tee times several hours in an effort to beat afternoon thunderstorms in the forecast.

Good move, though not as impressive as the moves made by Brendon Todd and Dustin Johnson, who each had career-best rounds of 61, nine-under par, on the TPC River Highlands in Cromwell, Conn.

The duo occupies the top two places on the leader board heading into Sunday’s final round. As for the weather, the final minutes of the round were played in the rain, but ahead of the thunderstorms. Alas, the forecast for Sunday is for scattered thunderstorms beginning around 11 a.m. (EDT).

The resumption of Brendon Todd’s resurgence

Todd was among the headliners when this season began last October, winning two in a row, at the Bermuda Championship and the Mayakoba Golf, but as the calendar changed to 2020, followed by the COVID-19 suspension, he was largely forgotten again.

When play resumed recently, he missed the cut in the first two starts, but on the strength of his 61 on Saturday, he is in position to add a third victory this season.

“It seems like since the fall, whenever I get a two- or three-week stretch in a row, I tend to be playing better by the end of it,” he said. “That’s just something I’m using to my advantage now after missing two cuts. I’m peaking in the third week and hopefully I can get it done tomorrow.”

Todd made nine birdies and nine pars, and hasn’t made a bogey since the fourth hole of the first round on Thursday.

Recall that Todd went through a barren stretch that had him contemplating an early retirement. He had missed 37 cuts in 40 starts at one point. 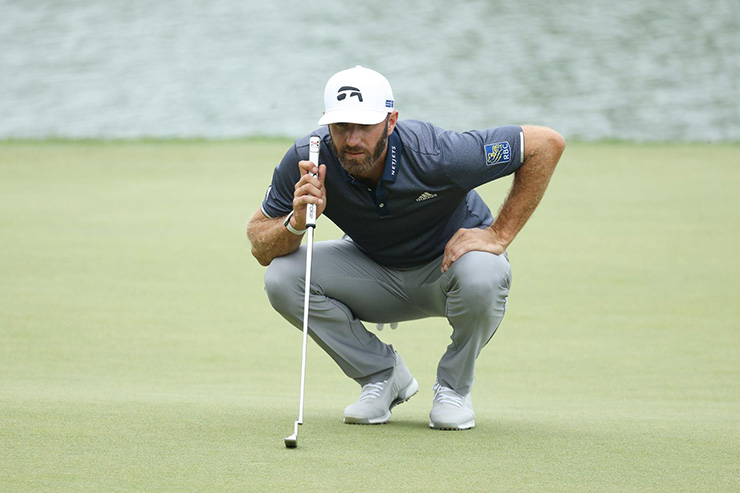 It’s not true that Johnson is sleep-walking through his career, of course, though it does seem like it at times. When the season resumed three weeks ago, he did not play as though he was sufficiently prepared for the restart, missing the cut at the Charles Schwab Challenge, then tying for 17th at the RBC Heritage.

Whatever the cause, he appears to have rediscovered the gear that has made him a future World Golf Hall of Famer. He has had rounds of 69, 64 and 61. He is, as they say, trending in the right direction.

He was asked about whether he ever experiences stress on a golf course.

“A lot more than you think I do,” he said. “I just try not to show it. Today I hit a lot of good iron shots, so there wasn’t really any much of a struggle. I felt like I gave myself really good birdie opportunities on every hole.”

Phil’s bid goes off the rails 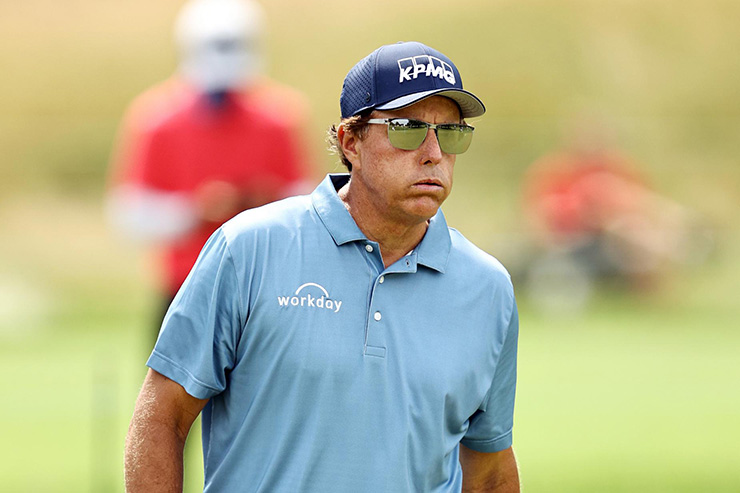 Literally, off the rails. Phil Mickelson, the 36-hole leader of the Travelers, already was struggling to keep in contact with the leaders on Saturday, when he did the unthinkable at the par-5 13th hole.

Mickelson was in a bunker right of the green in two shots, facing a 39-yard shot to the green. Instead, one of the best players ever with a wedge in his hands, he bladed his third over the green, out of bounds, and off some railroad tracks.

He took a drop in the bunker, then got up and down for a bogey six that dropped him four off the lead.

Mickelson, who turned 50 less than two weeks ago, will need a heroic effort on Sunday to become the eighth player in his 50s to win on the PGA Tour. He’ll start the final round six shots off the lead. 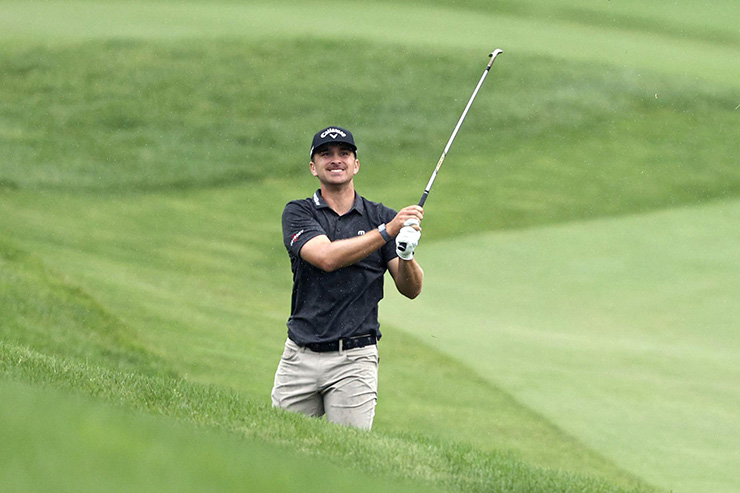 A 23-year-old from Vanderbilt University attempting to play his way onto the PGA Tour, Gordon played his way into the final pairing on Saturday by virtue of a second-round 62 on Friday. He was playing alongside 36-hole leader Mickelson and Mackenzie Hughes.

The good news was that Gordon played Mickelson to a draw. The downside was that each shot a one-over 71, which dropped Gordon to a tie for 12th, seven shots behind the leader.

His goal now would seem to be a top 10, which would get him into the Rocket Mortgage field without having to spend a sponsor’s exemption. Currently, he is in the field on a sponsor’s invitation. 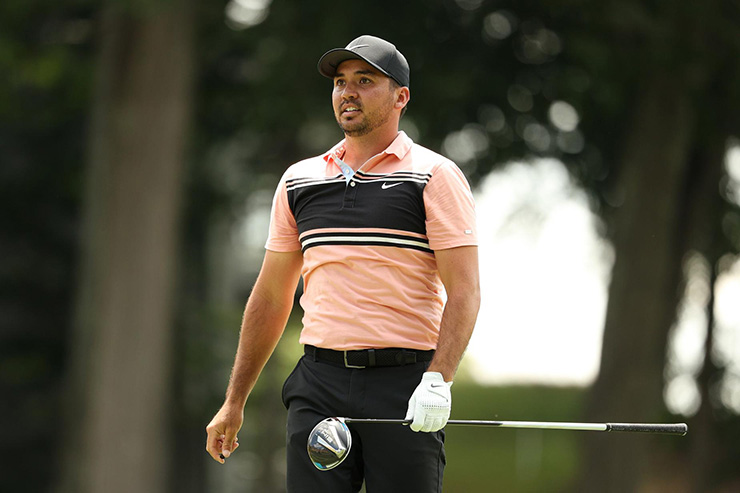 It is becoming increasingly apparent that COVID-19-related news is going to be a daily occurrence with the PGA Tour’s return.

The latest was Jason Day, who on Saturday morning at the Travelers Championship requested a test. As a result, he was sent out in the third round playing as a single.

The test, however, came back negative, allowing Day to continue playing. Had the test been positive, he would have had to withdraw.

Denny McCarthy withdrew after the first round because of a positive test. Bud Cauley, who was paired with McCarthy, also withdrew as a precautionary measure.

Prior to the start of the Travelers, Cameron Champ withdrew after testing positive for the virus. Brooks Koepka and brother Chase Koepka both withdrew for precautionary reasons after Brooks’ caddie Ricky Elliott tested positive. Graeme McDowell similarly withdrew after his caddie tested positive. Webb Simpson withdrew amid concerns about a family member being positive, though he announced on Saturday that turned out not to be the case.

There, too, was the PGA Tour announcing an update to its testing protocol.