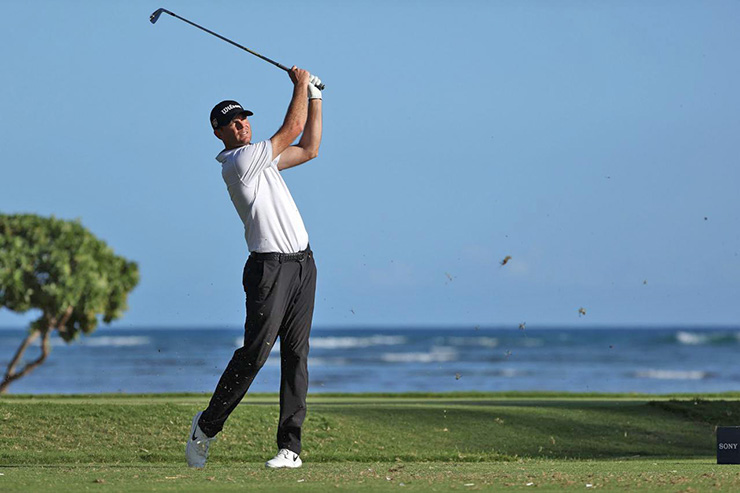 Brendan Steele hits his tee shot from the 17th tee during the third round of the 2021 Sony Open in Hawaii. Gregory Shamus

A year ago at the Sony Open in Hawaii, Steele led by three going into the final round at Waialae Country Club and was up by a stroke going into the final hole of regulation. He ended up losing in a playoff in a wet and wild finish that included a lengthy wait on the final hole of regulation after Ryan Palmer hit his second shot out of bounds from the group in front of him. Cameron Smith went on to win on the first extra hole.

This year, Steele leads by two after a nine-under 61 in the third round that included seven birdies over his final 11 holes. Kevin Na, who also shot 61, is tied for second with Joaquin Niemann.

“I don’t know if I am [playing inspired], but definitely the first practice round we played was on the back nine and I was remembering some shots, some good and some bad, kind of kicking myself a little bit,” Steele said. “I usually play well coming off of a break, and I had a nice break.”

Through three rounds, Steele has played like it—especially on Saturday. The 37-year-old three-time tour winner hit 13 of 14 greens and was just as deadly with his putter, gaining 3.377 strokes on the field on the greens, good for second-best in the third round.

One difference from a year ago for Steele: His eyesight. Steele underwent Lasik surgery three weeks ago. He said he did so because he had trouble seeing his shots land in the distance but added that he’s also reading greens better than he ever has.

Now he just hopes to finish this one off.

“[Last year’s tournament] definitely I would say was probably the [one that] most slipped away [in my career],” Steele said. “Sometimes it just comes down to what the other guy does, as well. You can’t always pull off what you want to. I would have liked to make birdie on 18 last year. But unfortunately made a par and Cam had a nice up-and-down, and [I] didn’t do so well in the playoff.”

Steele is not the only one looking for redemption, either.

At last week’s Sentry Tournament of Champions, Niemann came up one short of tying the PGA Tour record for birdies in a week, making 31, and took the clubhouse lead at Kapalua when he closed out a 64 on Sunday. Harris English caught him on the 72nd hole, and then Niemann lost in a playoff when he failed to get up and down for birdie from the rough on the par-5 18th on the first hole of sudden death. 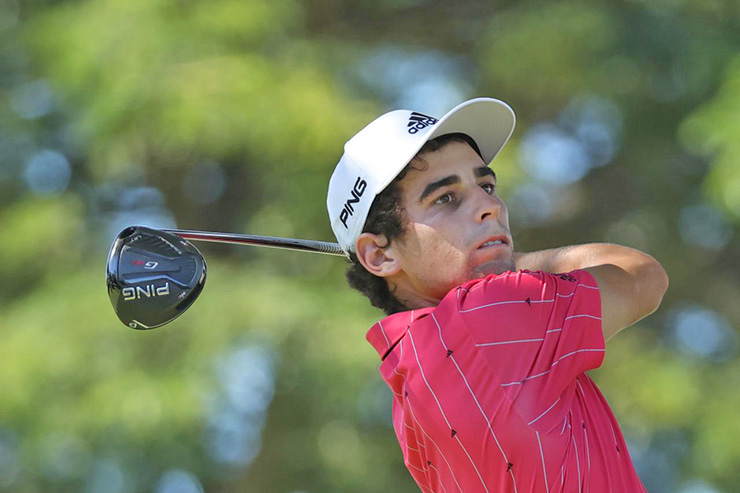 A week after losing in a playoff at the Sentry Tournament of Champions, Joaquin Niemann is just two back at the Sony Open. Gregory Shamus

Saturday, Niemann put himself in contention again. He shot a 63 that was capped off with a birdie on the difficult 17th and an eagle on the 18th, where he stuck his approach with a 7-wood to inside 10 feet and made the putt.

“It was huge,” the 22-year-old Chilean said of his finish. “I wasn’t really satisfied on my first 16 holes. I thought I was playing great. I thought I could put myself in a better position, and then finishing that way and making eagle on 18 made me really happy and gave me a bit of motivation for [Sunday].”

Neither player will have much time to dwell on the opportunity ahead of them. With bad weather forecasted for later in the afternoon, final-round tee times were moved up two hours, with players going off in threesomes between 8:30 and 10:30 a.m. local time. The wind is also expected to blow—something it hasn’t done much of all week—and that should make conditions harder than they have been the first three rounds.

Steele will also have plenty of competition with 11 players within four shots of his lead.

“I know guys are going to be coming after me,” he said. “There should be a lot of birdies out there even with the wind picking up a little bit. I know I’m going to have to shoot one of the best rounds I’ve ever shot to go win it. So that’s what I’m going to go try to do.”