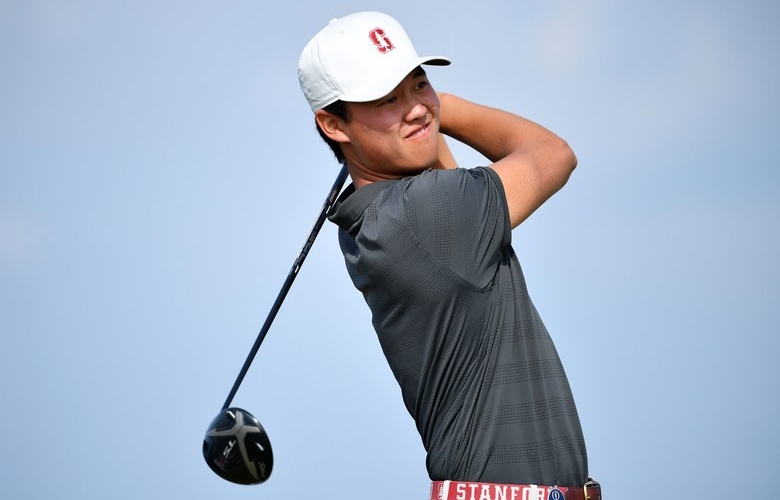 By Ryan Herrington
That Brandon Wu would hold a one-shot lead after Day 1 of stroke play at the 119th U.S. Amateur Championship is hardly a surprise. The recent Stanford grad who helped the Cardinal win the NCAA title in May is in the midst of an impressive summer run that includes becoming the first amateur golfer to qualify for the U.S. and British Opens in the same calendar year since 1967. Wu finished T-35 at Pebble Beach (and was awarded his college diploma behind the 18th green) before missing the cut at Royal Portrush.

But there’s a backstory that makes Wu’s opening five-under 65 at Pinehurst No. 4 on Monday all the more impressive. Just the day before, Wu, the eighth-ranked player on the World Amateur Golf Ranking, was competing in the final round of the Pan American Games . . . in Lima, Peru. A closing even-par 71 left him in fourth place as an individual and helped the mixed U.S. team win a gold medal in the four-day event.

Afterwards, Wu went to the airport and took a red-eye flight through Miami to Pinehurst, where he arrived mid-morning on Monday, a few hours ahead of his 2:45 p.m. tee time (USGA officials gave him an afternoon time to accommodate his schedule since he was representing the country in an international competition).

By participating in the Pan Am Games for the U.S., Wu had to forgo weekend practice rounds at Pinehurst. However, the 22-year-old from Scarsdale, N.Y., visited the North Carolina resort in early July, getting the chance to play the newly re-designed No. 4 and the fabled No. 2 course.

Wu showed few signs of fatigue on Monday, as he closed out his round with three birdies and an eagle on the 14th through 17th holes. A par on the 18th still gave him the competitive course record.

“I tried to manage my sleep as well as I could,” Wu said. “I slept great on the two flights up here, and then took a quick nap before I teed off for about two hours. I actually feel pretty good.”

The top-64 players after Tuesday’s second round of stroke play will advance to match play, which will be contested from Wednesday through Sunday’s scheduled 36-hole final.

Ed’s Note:  MENA Tour prodigy Rayhan Thomas had an opening round to forget, carding a 10-over-par 80 to sit in T-262 place – 15 shots off Wu’s first-round pace. It’s not all bad for the Dubai Creek Golf & Yacht Club member even though he looks unlikely to advance to the matchplay phase at Pinehurst; Thomas is headed to Oklahoma State University for the next chapter in his golf education.

RELATED: MENA Tour trailblazer Rayhan Thomas is about to take his golf education to the next level