The Shark’s Next Meal 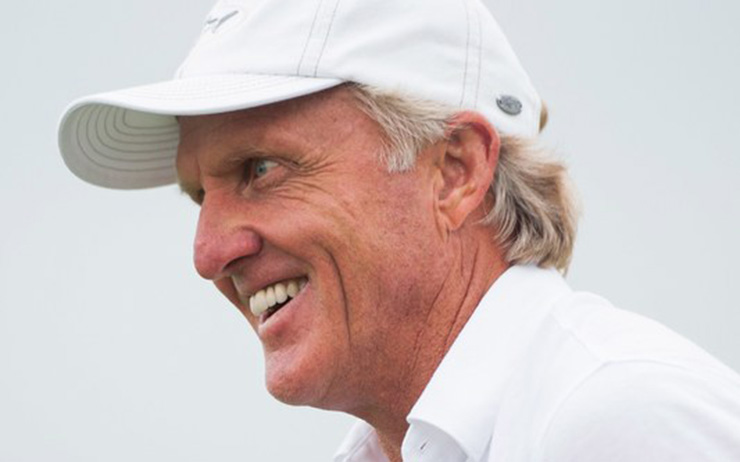 Though he hasn’t competed in an official tournament in nearly five years, Greg Norman isn’t done with the game of golf. Not remotely. You’ll see in October, he says.

No, the Great White Shark isn’t making a comeback, not at age 62, not after nearly severing his left hand with a chainsaw three years ago while performing some do-it-yourself tree trimming at his palatial estate in Jupiter Island, Fla. And not with all the other scar tissue he has accumulated during a Hall of Fame career that was marked by dominance and disappointment.

What Norman has up his sleeve is something called the Verizon Championship, the product of a strategic partnership between the recently rebranded Greg Norman Company and Verizon. The partnership, which was announced in late March, bills itself as bringing “innovative and disruptive technology to the golf industry.” We shall see what that means. There also are non-golf components to the collaboration, including educational technology.

Last month the Australian native could barely contain his enthusiasm for this latest project when he visited Columbus, Ohio, to join Jack Nicklaus at The Legends Luncheon, a charity event held in conjunction with Nicklaus’ Memorial Tournament. Norman was invited to the luncheon, where he and Nicklaus shared stories and memories to help raise money for Nationwide Children’s Hospital, on the eve of Norman being the tournament’s primary honoree for a career that includes 91 worldwide titles, including two majors, and 331 weeks atop the Official World Golf Ranking, second most all-time behind Tiger Woods. Also being honored on Wednesday at Muirfield Village Golf Club in Dublin, Ohio, are Ken Venturi, Tony Lema and E. Harvie Ward, Jr., while Golf Digest editor-in-chief Jerry Tarde will accept the Memorial Golf Journalism Award.

“We’re launching something in the third quarter of this year that is virgin space, something that no one has ever gone into before with the game of golf,” Norman said last month, the week after the Masters. “I’m excited about launching that.”

Norman has been disruptive in golf before—to the benefit of today’s players. The World Golf Championships, begun in 1999, were an outgrowth of a big idea called the World Tour that Norman proposed in 1994. That initiative was billed as a series of events for the top 30 players in the world. Although Norman contended that PGA Tour and European Tour players would be able to play World Tour events in concert with their home tours, the PGA Tour saw the idea as competition, and then-new tour commissioner Tim Finchem quashed the $25 million circuit. And since 1989 Norman has hosted the Shark Shootout, an unofficial tour event featuring two-man teams.

I really don’t miss it all. … I tried to win as much as I could, and I always tried to get better and better. And every time I got better, that rung got higher and higher. And it’s hard to maintain that game and that edge. I’d rather pour my energies into my business. — Greg Norman

Norman’s latest gambit might reap significant rewards for players. A long-time golf official who claimed to have some insight into the deal indicated that the event would feature team play and have a fantasy component using scores and statistics. It is believed that the Verizon Championship could put up a purse that far exceeds this year’s richest official tournament, the U.S. Open, which offers $12 million.

Norman would not confirm any details. “I haven’t talked about it, so I don’t know how anyone could know anything about it,” he said.

The Shark was not gritting his pearly whites when he said it. Instead, there was a gleam in his eye, which he gets when expounding on his varied and highly successful business interests. Last year, he rebranded his company, changing the name from Great White Shark Enterprises to The Greg Norman Company as he retreats from the sports-marketing world to focus on business-to-business ventures.

The kick he gets from running his empire addresses the competitive hunger he used to sate with golf, but while many of the players he once dominated enjoy senior-level competition, Norman has no appetite for it. He sounds much like his idol, Nicklaus, when he explains his aversion to the commitment required for competitive golf. At the same time, he remains uncannily fit—and has often proudly displayed his physique on Instagram. The most recent example was a video of Norman executing leg raises crunches the crutches, which he needed after suffering a torn tendon in his left foot the week after the Legends Luncheon. 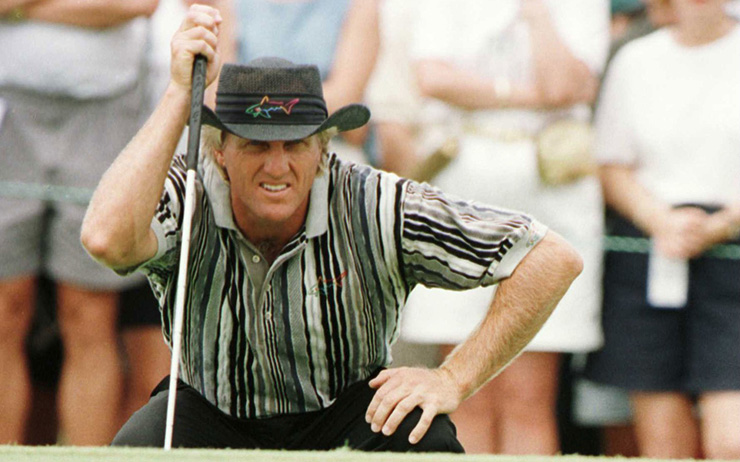 “Look, I’ve done it long enough,” he began in explaining his departure from the competitive golf arena. “I’m enough of a realist. I never wanted to be a ceremonial golfer. You realize that you go up against these young kids, or even against the guys who play regularly on the Champions Tour, you’ve got to keep practicing, keep practicing. I’ve hit nearly 5 million golf balls. I don’t want to hit another 5 million. On top of that I have the other side of my life, which is my business. I love it, I love growing the business and I’m optimistic about the future of it. That’s enough of a challenge for me by itself. You have to commit to that as much as you do your golf game.” 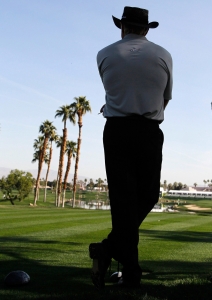 Even years removed from his golf prime, Norman’s silhouette remains iconic to many fans

“I understand what Greg is saying, totally,” Nicklaus said. “I miss the competition, but I don’t have a game to compete anymore. You’ve got to have things that take over your competitive juices. To me, most of my competitive juices have been in golf-course design. But that has been slowing down. Actually, the charity work has taken over. My wife has got me more involved, and I’m enjoying meeting all kinds of new people and new challenges.”

“I really don’t miss it all,” he said. “It’s a very easy decision for me. I did all I could do in my career. I tried to win as much as I could, and I always tried to get better and better. And every time I got better, that rung got higher and higher. And it’s hard to maintain that game and that edge. I’d rather pour my energies into my business.”

“It doesn’t surprise me,” said Tony Navarro, who caddied for Norman during much of the Shark’s prime. “The way he went at it for some many years, as hard as he worked, I can understand. The guy never even takes a nap. Working out is his nap. These guys today work hard at the game. But Greg in his prime worked harder than anyone else, and he has moved on to work hard at other things. There is no point to golf anymore.”

That’s not to say Norman will never play tournament golf again. “One thing that might get me out a little more is the Father-Son Challenge with my son [Gregory] at the end of the year,” he allowed. “And if I do commit to that, then I will give it my full attention, as much as I can. I’ll probably start six weeks out, get the rotation going. We did play in it before, but not for a long time because it has been scheduled opposite the Shark Shootout. That’s probably one thing that would get my interest in playing, but that’s one time. That’s the one exception I’d be happy to make.”

Before that, however, is the so-called Verizon Championship venture. True to his life goals at the present, he’ll take on tournament golf at the executive level and leave playing the game to others. Say this for the Shark, he always has been comfortable swimming with the big fishes, whatever the challenge.