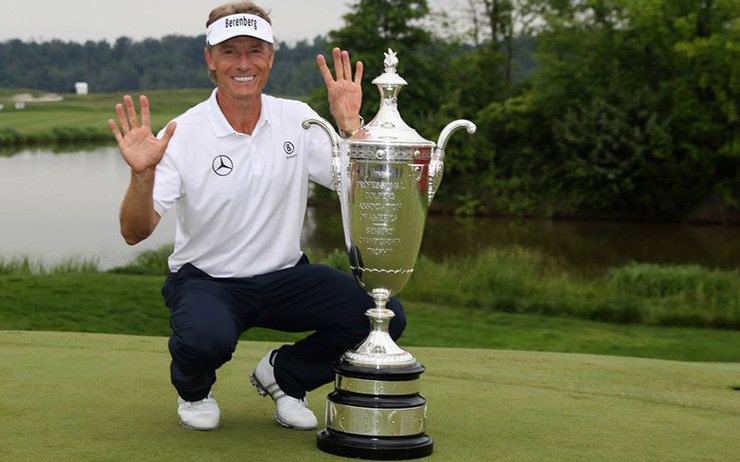 It was a showdown worthy of two men who already have spots in the World Golf Hall of Fame. For much of Sunday afternoon, Bernhard Langer and Vijay Singh matched each other shot for shot at Trump National Golf Club, Washington, D.C., separating themselves from the rest of field at the KitchenAid Senior PGA Championship. Over the final few overcast holes, there was just one question to answer: Who had enough left to win?

As has usually been the case since joining the PGA Tour Champions in 2007, the 59-year-old Langer proved too tough to take down. A 15-foot birdie on the par-4 16th hole gave him a one-stroke advantage after Langer and Singh had equaled each other’s scores on the previous nine holes. Then on the par-3 17th, Singh made a three-putt bogey from 35 feet (missing the par putt from six feet) that made his birdie on the 18th hole academic.

With a par-par finish, Langer closed out a four-under 68 to win by one stroke with his 18-under 270 total.

“We play to win tournaments, especially majors,” Langer said. “And now have surpassed Jack Nicklaus in majors on this tour is pretty unique. To win back-to-back majors is really hard to do. I was really tired. I was aching. … I’m blessed.”

ICYMI: (and we hope you didn't) Here's the Championship-clinching moment for Bernhard Langer #SrPGA pic.twitter.com/inwRitu77T

The victory was Langer’s 32nd on the senior circuit but his first at the oldest major in senior golf. In turn, the German became the first golfer to win all five tournaments designated as majors on the PGA Tour Champions.

“He played awesome,” Langer said of his opponent. “I played pretty much as good as I can. If he made a few putts he would have had me. … He has some weapons I don’t have.”

Indeed, playing in just his 15th PGA Tour Champions start, Singh, 54, resembled the golfer who had won a record 22 PGA Tour titles in his 40s. Singh’s distance off the tee allowed him to attack Trump National’s par 5s, where he’d made birdies 12 out of 16 times.

But Singh’s power game was offset by a balky putter as he would miss makeable eagle and birdie attempts on several holes Sunday, including the five-footer for par on the 17th.

Conversely, Langer’s putting game shined as he made crucial birdie putts on the ninth, 13th and 16th holes to keep the pressure on Singh in their mano-a-mano duel. By week’s end, Langer led the field in driving accuracy (51 of 56, 91.6 percent) and greens in regulation (61 of 72, 84.72 percent). In the final round, Langer hit 17 of 18 greens.

“If I would have putted nicely, this thing probably would have been over a long time ago,” Singh said. “But Bernhard played really solid, he never missed a shot, and he was always on the green and he putted nicely as well, so he deserved to win. The way I played, he should win.”

Like Langer, Singh had much to play for on Sunday. Since winning the 2008 Deutsche Bank Championship on the PGA Tour, it had been nearly eight years and 215 events from his last individual victory (he shared the crown with Carlos Franco at last month’s Bass Pro Shops Legends of Golf event). He’ll be back at it next week, playing in the Memorial Tournament.

Meanwhile, it’s hard to speculate just how many majors Langer can win before he’s done on the PGA Tour Champions. With back-to-back majors now under his belt (the second time he’s done that in his career) and this the fourth time he’s won more than one major in a calendar year (joining 2010, 2014 and 2016), it would appear he’s not likely to slow down in the near future. His next shot comes at the end of June when the U.S. Senior Open is held at Salem (Mass.) Country Club.

There’s at least one player who thinks Langer isn’t close to being done.

Congratulations Bern! What a great win! I have always said that records are made to be broken, and congratulations… https://t.co/Rszfx2AIMy