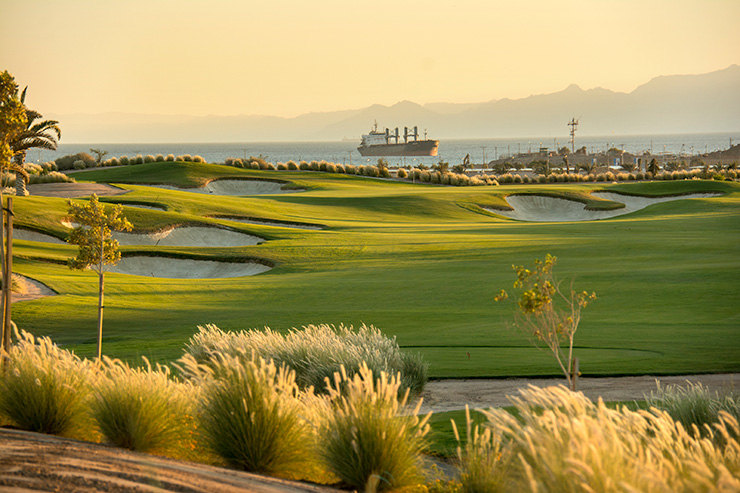 Ayla Golf Club in Aqaba, Jordan plays host to the first and final events of the autumn swing schedule.

By Kent Gray
The MENA Tour’s ambition to become the “best little mini-tour in the world” continues to gather momentum with a host of new European and Asian Tour invites dangled in front of its members.

The region’s Official World Golf Ranking (OWGR)-sanctioned circuit announced the opportunities – courtesy of new ‘Final Five’ and “Penultimate Four’ Autumn Swing order of merit races within the overall season-long OOM race – as the second half of the 10-event season looms.

Invites to the 2020 Omega Dubai Desert Classic (ODDC) had already been secured for the eventual Journey to Jordan champion, second-placed professional and leading amateur, a race currently led by Englishman Curtis Knipes.

Now a fourth ODDC invite to the European Tour event at Emirates Golf Club (January 23-26) has been announced for a new category within the overall OOM race; the ‘Final Five’ is a separate money list encompassing the final five events of 2019. The tour has also unveiled the ‘Penultimate Four’ (the four autumn swing events excluding the Tour Championship) which will offer the winner invites to two full-field Asian Tour events: the Thailand Open (Nov 7-10) and the Panasonic Open India (Nov 14-17).

Apart from the Omega Dubai Desert Classic start, the overall Journey to Jordan champion will also receive invites to another European Tour event – Made in Denmark – and the Diamond Cup which is co-sanctioned by Japan Golf Tour Organisation and the Asian Tour. Englishman Matthew Baldwin currently leads the professional OOM race but is unlikely to return until the Tour Championship as he chases a European Tour card via the Challenge Tour where he is currently 30th in the Race to Mallorca rankings. Robin Roussel, second on the MENA Tour OOM, is in even better shape to automatically graduate to the European Tour by finishing inside the top-15 on the Challenge Tour; the Frenchman is 7th overall and looked set to collect more valuable ranking points after making the cut in the Open de Bretagne in France which was due to reach its climax later Sunday.

The J2J runner-up will be invited to two leading Asian Tour events – the 2020 Bank BRI Indonesian Open and the season-ending Indonesian Masters (Dec 12-15), meaning the MENA Tour Championship is also likely to be a lure for Roussel.

“In the early part of the season, we had quite a few Challenge Tour members playing our tournaments and players like Matthew Baldwin, Robin Roussel and MG Keyser have already won tournaments on the 2019 MENA Tour. However, they will be busy with their own schedules during the next few weeks and we decided to create the ‘Penultimate Four’ and the ‘Final Five’ to provide an added incentive to our members who are playing a full MENA Tour schedule,” said David Spencer, Strategic Advisor to the MENA Tour by Arena.

“After regular discussions with our members, we have realised there is a strong desire and ambition in them to be able to play on higher-profile tours,”

“Every player on the development tours is looking for these opportunities. I think with the unveiling of these invitations, we have been able to present a very impressive array of rewards for our members.”