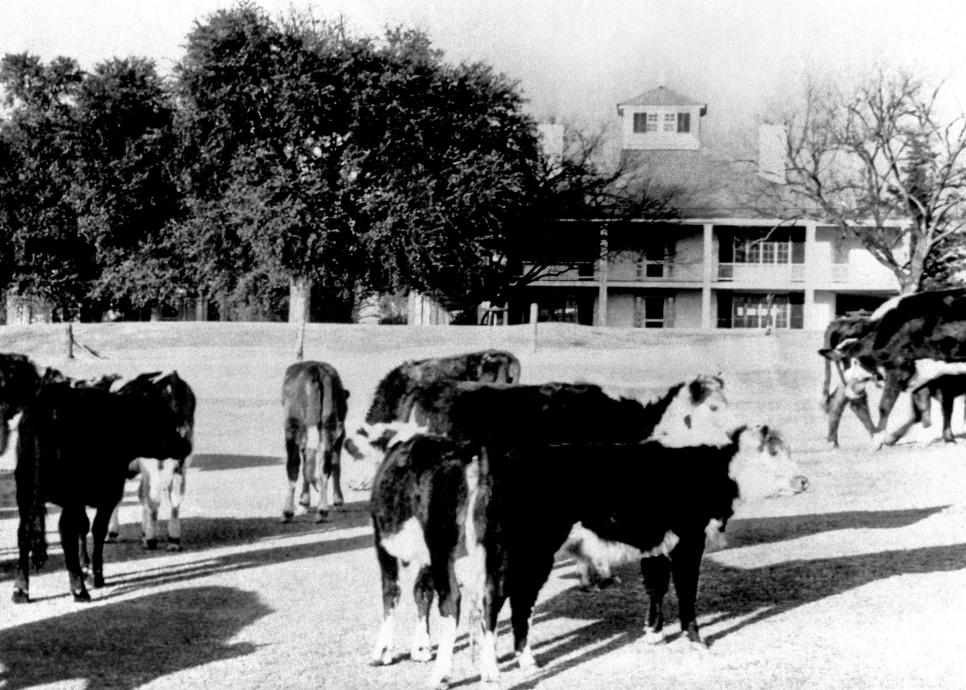 By E. Michael Johnson
Augusta National and the Masters is long on lore. That’s to be expected for a tournament that’s been held, save for World War II, since 1934 at the same venue. Such familiarity, along with the mystical appeal of the club itself, has lent to a long list of tales—you know, the type where you tell a golf buddy, “You won’t believe this, but did you know Augusta National does this …”

As with most telling of tales, the stories tend to grow a little longer over time. Or perhaps not. When you have a place as special as Augusta National, some stories—heck, most stories—tend to actually be true to some degree. Here are some of the most spoken-about myths that circulate regarding the Masters along with our own Snopes-like assessments of their veracity.

The club lays ice on the azalea beds to help them bloom for the tournament
The Masters is known for its abundance of spring colours, and none is as synonymous with the tournament as its azaleas, resplendent in their bright pink, red and purple colours. And what would the Masters be without them? So, it stands to reason the club would spare no expense to get the timing of the bloom for the second week of April, right? Um, no. Come on, be serious. For starters the ice would either shock the plants or melt fast, plus you’d pretty much have to have your own ice-manufacturing facility to make enough cubes to cover so much ground. While this rumour ran pretty hard for a number of years, thankfully most—but not all—Masters patrons have come to their senses. 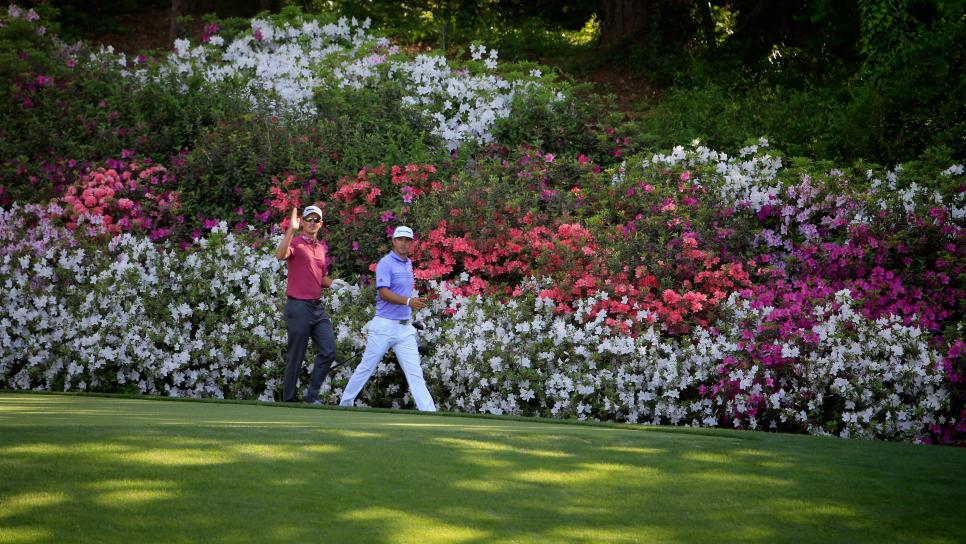 Hostages were once taken at the club by a man demanding to speak to President Reagan
Since it’s basically impossible to get on the grounds at all without a proper introduction, this on the surface would seem far-fetched. Except it is absolutely true. In October 1983, Charles Davis barreled his pickup truck through a gate, made his way to the pro shop and took five hostages, demanding to speak to President Reagan, who was playing a round of golf on the course that day. Thankfully the incident ended without anyone being harmed. If your curious for more, our Dave Kindred wrote this detailed piece about the unbelievable incident. 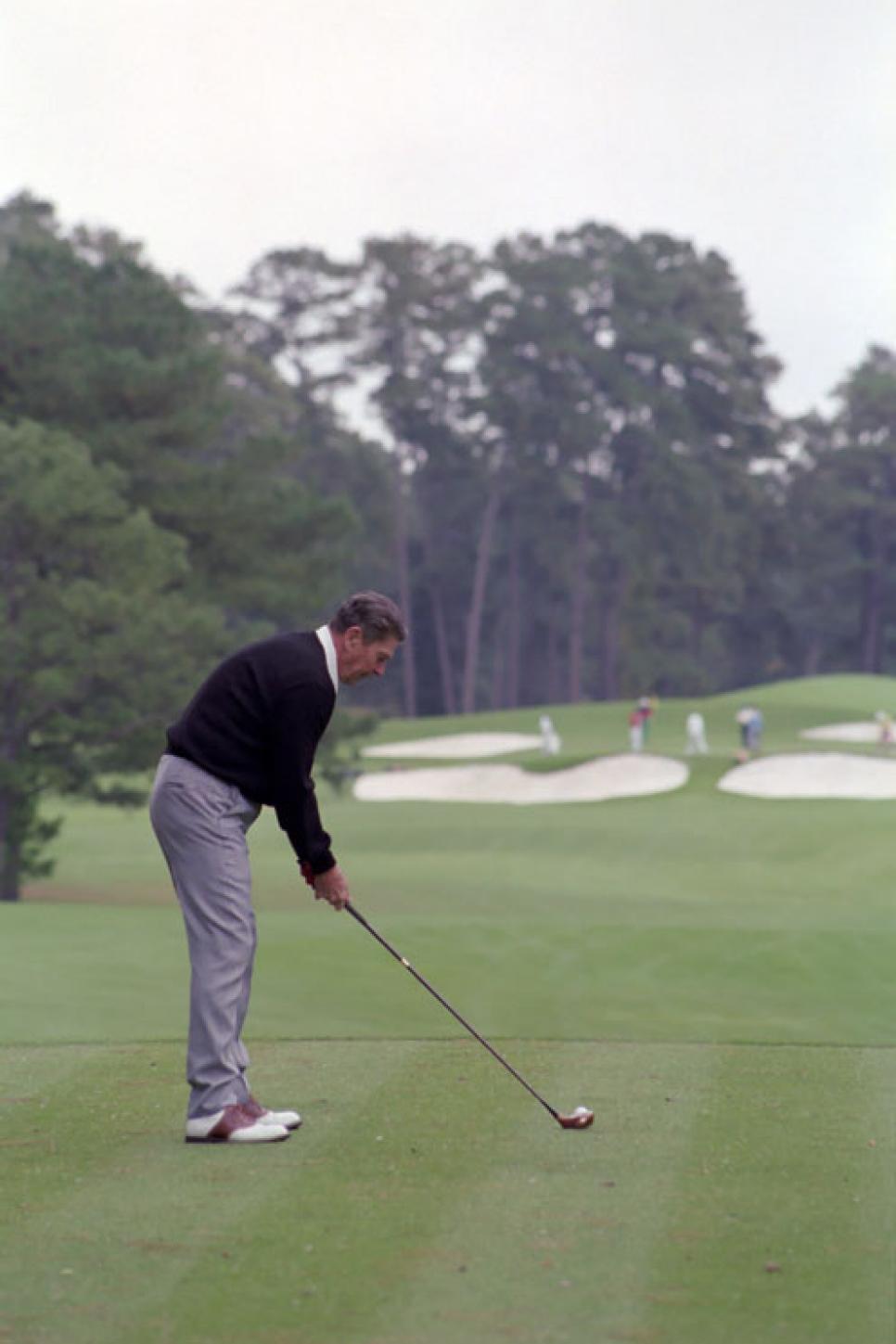 There’s a house in the middle of a Masters parking lot that the owners won’t sell
Augusta National, in its efforts to make the patron experience as enjoyable as possible, has acquired a fair amount of property surrounding the club so that it could offer free Masters parking to patrons within a reasonable walk of the gates. As expected, the club has been generous in its offerings and has met little resistance—with one notable exception. A small, three-bedroom home belonging to Herman and Elizabeth Thacker sits smack in the middle of the activity. Despite repeated attempts from the club to purchase it, the answer has always remained a polite, but firm no (Herman passed away in 2019). Perhaps it is because they are hopeful one day to have a Masters participant as a house guest. Their grandson is the PGA Tour’s Scott Brown, who has yet to qualify for a Masters invitation. 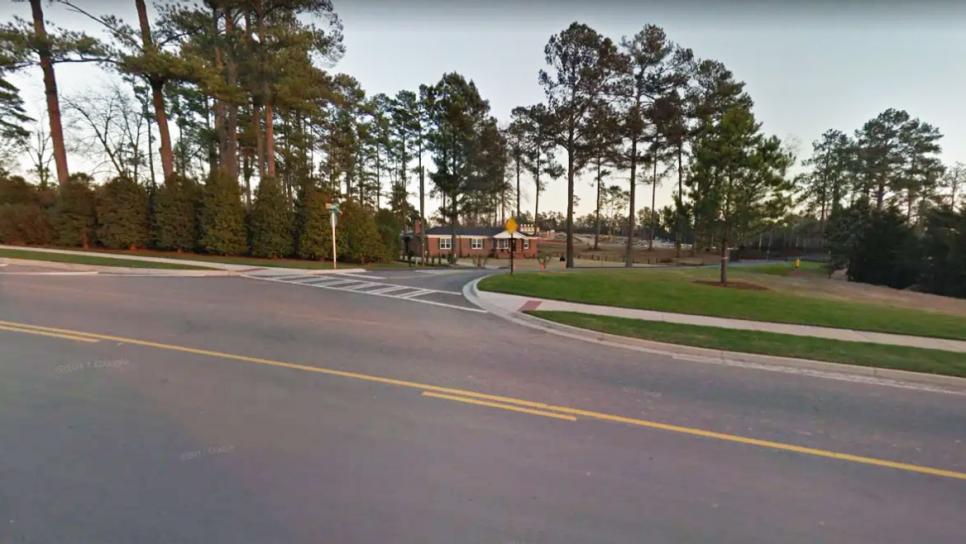 There is a lone palm tree on the course
Given how orderly everything is at Augusta National, finding something out of the ordinary is a rarity. Yet arborists who roam the course will notice a one-of-a-kind for ANGC on the fourth hole—a lone palm tree that stands sentinel to the right of the green, camouflaged by other surrounding trees. In recent years, the club cut back the trees and brush and now the Palmetto is a highly visible sight on the par 3. (Kindred has a story about it, too.) 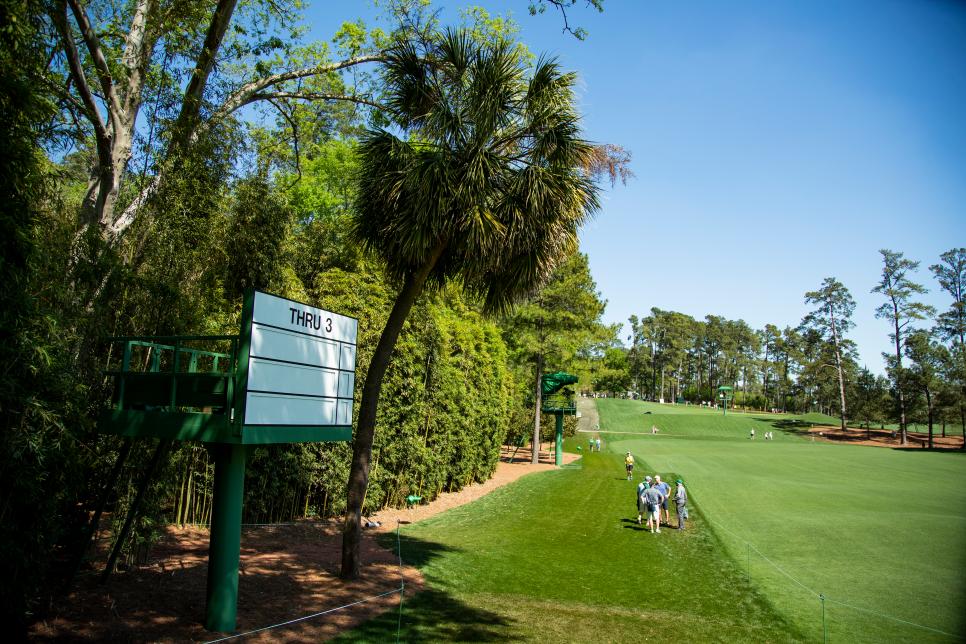 The telecast pipes in fake bird sounds
This is one that has had some legs, with bird aficionados claiming the sounds they were hearing were not birds indigenous to the Augusta area. Not that the suspicions are without some merit. At the 2000 PGA Championship at Valhalla Golf Club, CBS got caught by eagle-eared ornithologists who recognized the sounds they were hearing could not be from birds in Louisville. When called on it, the network fessed up, which only ramped up the suspicion it was doing the same at Augusta National. The accusations got to a point where the New York Post reached out to Augusta National for comment during the 2001 Masters, bringing the following reply: “The birds you hear are live and they are indigenous to Augusta.” Well OK, then.

Cattle roamed the club grounds during World War II to maintain the course
When the club closed shortly after the 1942 Masters, it remained closed for several years due to World War II as many members and employees joined the war effort. With the club not financially secure at the time, co-founder Bobby Jones bought 200 cattle, figuring that not only would their grazing keep the grounds in acceptable condition, but that they could later be sold (see photo above). On the surface, a solid idea. However, according to Masters.com, “Things did not turn out as planned. With the Club closed, workers stopped the annual planting of winter grass, and as the bermudagrass on the grounds became dormant it provided little in the way of food and nourishment for the cattle. That led to a problem: the cows started eating the famous azaleas and the bark off young trees at Augusta National.” Ah, the best-laid plans …

Every champion donates a club to Augusta National for its champions collection
Not quite. Although this is a long-held tradition, an examination of the collection (which includes the 4-wood Gene Sarazen used for his famed double eagle and a number of other impressive artefacts) reveals one glaring omission. For reasons unknown, there is no club from 1992 Masters champion Fred Couples. Perhaps one day Freddie will let us in on why. 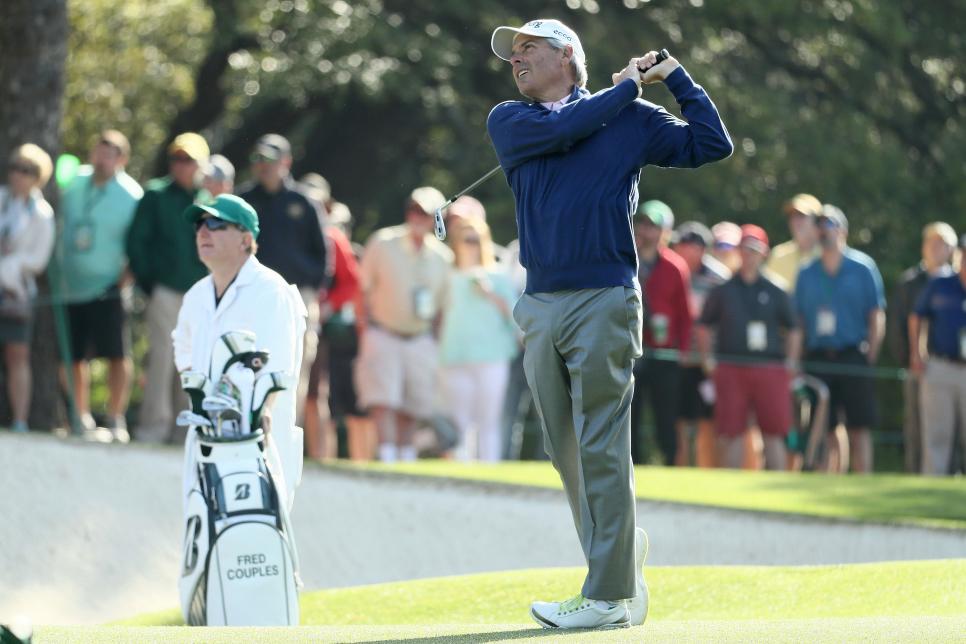 Hazardous chemicals are put in the ponds and creeks to keep them clean
The ponds and creeks are without question immaculate at Augusta National. But it has nothing to do with anything nefarious. Using a food-colouring-like dye, golf courses can give their ponds a rich, dark colour bordering on black, which provides a very consistent look while being perfectly safe. As for being dangerous to any wildlife, forget it. In fact, the ponds at the club are said to be wonderful fishing spots although the club downplays that bit of information. 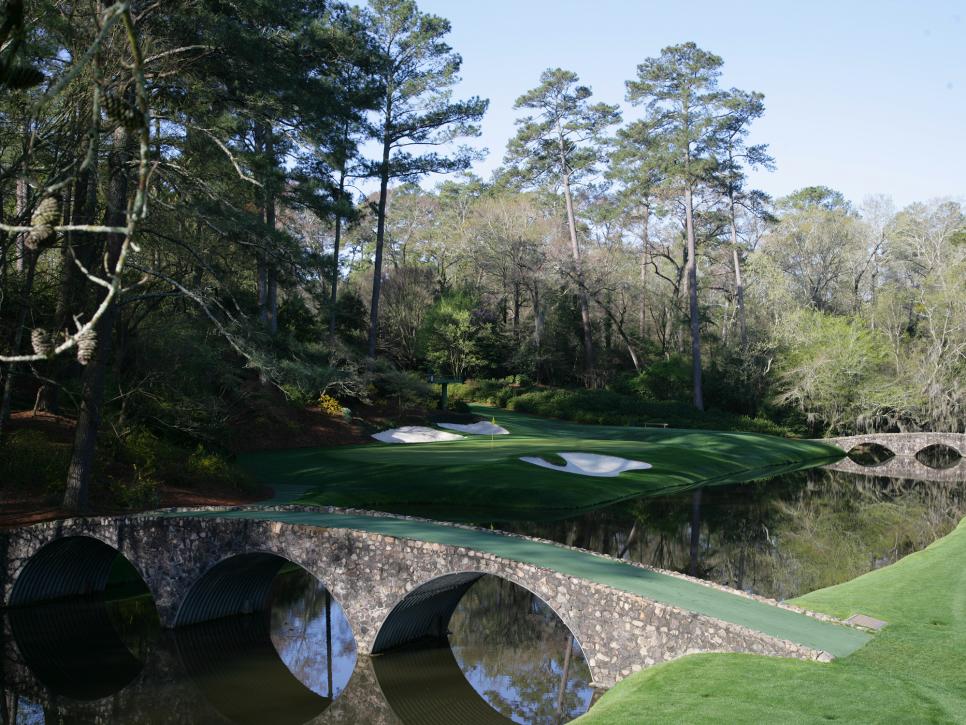 A patron once was arrested for stealing sand
In 2012, Clayton Baker wasn’t looking to pull off a heist, but he was seeking a unique souvenir—a cup of sand from one of Augusta National’s pristine bunkers. Walking back up the 10th hole after Bubba Watson won in overtime, Baker slipped under the ropes and made his way to the famous free-form bunker and grabbed a cup of sand. This would be the definition of a bad decision. By the time he made it to the 10th tee, he was handcuffed and arrested, setting off a chain of events that ultimately would cost him some $20,000 in various legal fees and other costs associated with the stunt.