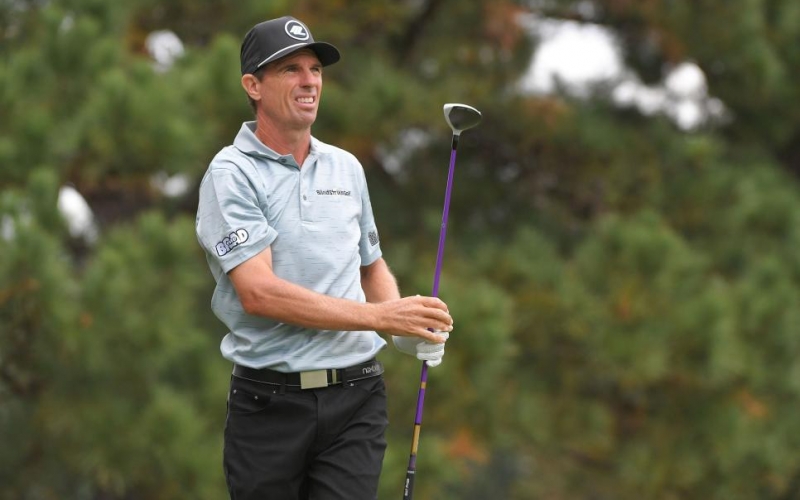 Ben Jared
Steven Alker had no status on the PGA Tour Champions when he turned 50 in July but somehow played his way into the Charles Schwab Cup Playoffs.

By Ryan Herrington
You’ll be forgiven if you don’t quickly put a face with the name of Steven Alker, the leader after the first round of the PGA Tour Champions’ Dominion Energy Charity Classic.

The New Zealander played just three full seasons on the PGA Tour spread (2003, 2015 and 2017), and the last of his 86 starts came at the 2017 Wyndham Championship. Prior to turning 50 in July and being eligible to play on the PGA Tour Champions, Alker was competing on the Korn Ferry Tour, making 29 starts in the 2020-21 season with just one top-10 finish to show for it.

And yet with an opening-round bogey-free 63 at the Country Club of Virginia in Richmond, Alker is the surprise leader of the first event in the Charles Schwab Cup Playoffs, a spot most assumed would be held by Phil Mickelson. The tournament’s defending champion has won three of his four starts on the senior circuit, but surprisingly could only muster an opening 71 and sits eight shots back of Alker in a tie for 31st.

That Alker would find himself in this spot is a pretty amazing story of great play at an opportune time. Upon turning 50, Alker had no status on the PGA Tour Champions. He earned a spot into the field at the Boeing Classic in August via a Monday qualifier and went on to finish T-7 that week in Washington state. The top-10 finish got him a spot in the next event, the Ally Challenge, in which he finished third and once again got into the next week’s event. Alker did this four more times, playing in seven tournaments overall, breaking 70 in 13 of 21 rounds and earning $499,707. That was enough to get to 55th place in the Charles Schwab Cup standings and qualify for the Dominion.

“Well, it’s a new chapter for me coming from Korn Ferry and playing with those young guys; big, strong, hitting it forever. So in places I was competitive out there, but I’m kind of maybe a little more competitive out here,” Alker said on Friday after grabbing his first lead after any round on the PGA Tour Champions. “But as I said, my game’s just coming around at the right time. You’ve still got to play golf and shoot the scores. These guys, they’re good so you’ve got to shoot some good scores. It’s just a combination of game coming together and just really wanting to play out here.”

While his best career finish in the PGA Tour was 17th at the 2003 Buick Invitational at Torrey Pines, Alker did win four times on the Korn Ferry Tour. Whether he can hang around the leader board through the weekend in Virginia isn’t entirely certain, but he looks likely to play his way into the next CSC Playoff event, where he has to be in the top 54 in the points list to advance.

That said, Alker is thinking bigger.

“Every guy wants to win out here, it’s huge,” he said. “I haven’t won for a while, but we’ve got two days to go. Out here I find with the three days, you’ve got to get a hot start, otherwise you’re kind of on the back foot of it. Only two to go. It’s kind of like playing the weekend really now, just keep going at it.”