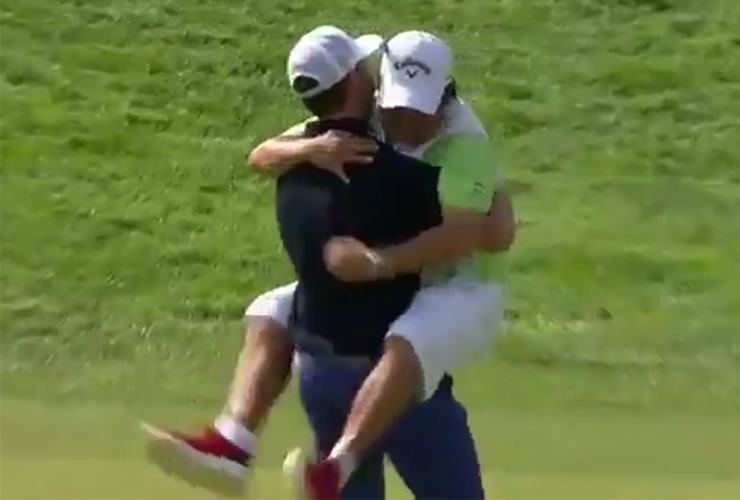 Welcome to another edition of The Grind where we almost got killed at the Travelers Championship last week. An American golfer who shall remain nameless nearly drilled me with a drive on No. 15. He shall remain nameless because he was only concerned with his lie as he walked right by me and a few others to get to his ball. Meanwhile, European golfers continue to display better manners in these situations. A week after Henrik Stenson laid down on the ground to pose for a selfie with a fan he plunked, Jordan Smith bought his victim (multiple) drinks at the BMW International Open:

What’s next, dinner and a movie? Seriously, fans might start trying to get hit by these guys. Anyway, kudos to Smith, Stenson, and others who actually care about the well-being of us little people in the galleries—or, at least yell “Fore!” when they hit an errant shot. And it’s good to know karma exists because of the player in question. . . never mind. He had a good week. Karma is officially dead, but The Grind lives on! Let’s dive into everything else happening in golf.

Chez Reavie: Is this the dawn of the Chez Reavie Era?! Probably not, but no one should be shocked by Reavie’s Travelers Championship triumph after his T-3 performance at Pebble Beach the previous week. I just hope the guy who bet on Chez to win the U.S. Open bet on him this past week. 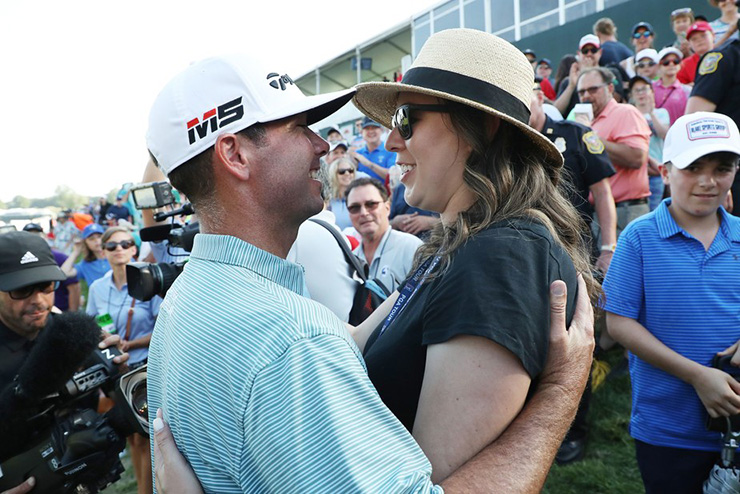 And rejoice, short hitters! His average swing speed is only. . . 108! OK, that’s still a lot faster than mine. . . The diminutive Reavie is never going to overpower a golf course like the typical tour winner, but he has always been one of the best iron players in the game. The most puzzling part of his second PGA Tour title is how long he waited for it. First Tiger snaps an 11-year drought in the majors and now Chez ends his 11-year drought in non-majors. What a time to be alive!

Zack Sucher: This was the rare week on the PGA Tour where you could declare two winners. Sure, Sucher blew a five-shot lead on Saturday in stunning fashion, but his rally to finish T-2 was awfully impressive—and important. Consider that in six years as a pro he had earned about $850,000 and had needed “to take out some credit cards” during a seven-month stretch two years ago in which he made no money. Well, he earned $633,600 on Sunday. “It’s life-changing, to be honest,” Sucher said.

Hannah Green: Also life-changing? How about the 114th-ranked player in the world going wire to wire? In a major? Congrats to this Australian for doing just that, instantly becoming one of the more surprising major champs in golf history. What’s even more surprising is how calm she remained throughout.

Pretty cool moment: Hannah Green walks off 8 and a little girl hands her a blue sheet of paper on which she’d written a poem. Hannah reads it, keeps it, gives the girl a hug and heads to 9th tee w 3-shot lead, going after first major.

Can you imagine Brooks Koepka doing that? Better yet, how about Tiger Woods in his prime? That is wild. Of course, considering the pace of play issues during the event, Green could have read a novella between holes.

Andrea Pavan: There was some shaky play from both Pavan and Matthew Fitzpatrick during their playoff at the BMW International Open, but the 30-year-old Italian finished in spectacular fashion with a winning birdie. Even better was his celebration (Check out the 27-second mark) with caddie Alejandro Molina.

Come for the Pavan putt ?

Stay for the caddie celebration ? pic.twitter.com/iQy4XAioO2

Also, this dude has some serious soccer skills:

@chelseafc, we hear you might be on the lookout for a creative playmaker ⚽

OK, so we’re buying Molina as much as Pavan. That guy is awesome.

Brooks Koepka in non-majors: It was good of Koepka to keep his commitment, but seriously, why bother showing up? Koepka couldn’t have looked more disinterested to be playing at the Travelers and you can’t blame him. That has nothing to do with the tournament itself, but to tee it up at TPC River Highlands just four days after nearly winning the U.S. Open at Pebble Beach? And after a long cross-country flight?

Michelle Wie’s career: Sadly, we’re getting to the point of there being no point for Michelle Wie to show up at any tournament—and she knows it. “I’m not entirely sure how much more I have left in me, so even on the bad days, I’m just like trying to take time to enjoy it. But it’s tough,” said an emotional Wie after shooting an opening 84 at the KPMG PGA Championship. To Wie’s credit, she didn’t WD and spoke to the media the following day after an 82. If this is the end of the road (and hopefully, it’s not), Wie has been a pleasure to watch. Well, not during the table-top putting phase, but you get the point.

Matthew Wolff’s pro debut: From the winding down of one phenom’s career to the start of another, I drove up to the Travelers Championship on Thursday specifically to see what was being billed as an important moment in golf history. Apparently, I was the only one. Let’s just say there wasn’t much of a buzz for the pro debut of this DISRUPTOR, but the Wolfpack will certainly grow. 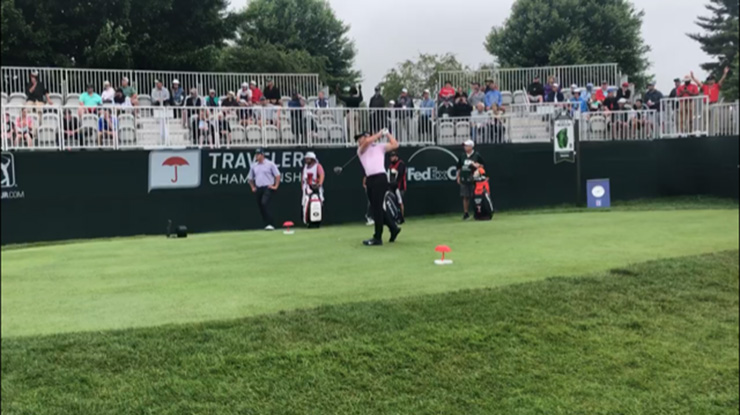 Holey Moley: I hate to pile on Stephen Curry after he had a tough NBA Finals in which his Golden State dynasty crumbled before our very eyes, but. . . wow, was this bad. Not that we should be too surprised considering most thought the show’s announcement was an April Fool’s joke. But. . . I mean. . .

Congrats to @StephenCurry30 and @ABC for somehow managing to make a golf show worse than #Shotmakers. https://t.co/iZxEqtWKTb

Poor Kenny G. I didn’t think his career could dip any lower than appearing in that Valentine’s Day video for Kanye and Kim. I was wrong.

The PGA Tour heads to Detroit for the inaugural Rocket Mortgage Classic, AKA that event funded by Cleveland Cavaliers owner Dan Gilbert that replaced the Quicken Loans National on the schedule. Gilbert founded Quicken Loans AND Rocket Mortgage (among other things). He has a lot more money than you do.

Random tournament fact: The tournament will be played at Detroit Golf Club and Rickie Rocket Mortgage Fowler is in the field. And. . . that’s pretty much all we know at this point.

Back to Andrea and Alejandro:

That’s nice to see, especially on a day where Matt Wallace came under fire for berating his caddie during the final round.

Kid’s got some pop.

ARCHIVE VIRAL VIDEO OF THE WEEK

How about this compilation of Gary Woodland high school basketball highlights set to the “Rudy” theme song?

.@GaryWoodland has been a baller for quite some time.

Impressive! Then again, even my high school basketball highlights would seem a lot better accompanied by the “Rudy” theme song.

Boom. Roasted. Of course, Vijay has always had the rep as a caddie killer, but Kip added a little more about the experience:

Watching one of the greatest to ever lace em up, prepare and get after it. Most of working for VJ was so cool. He treated me like a son (even though I’m older than him) away from the course. He never let me reach in my pocket one time. I made almost 50gs in 5 weeks. https://t.co/R7Ds5XUiyJ

Regardless of what people think that part didn’t matter. Sure there were a couple times where I was thinking “damn we been here all day” like every single caddie on the PGA Tour but I have never seen hard work not pay off. https://t.co/bnL0JlpZvm

How about Drake hitting the links? We think. . .

Album Mode. A series of photos shot by @jamilgshere

Rory McIlroy’s “Two Gloves Aubrey” comment was classic. And then there’s Dylan Windler, the Cleveland Cavaliers first-round pick out of Belmont who also maintains a one-handicap and practices trick shots in his spare time from shooting jump-shots.

Have a good rookie season, Dylan, and who knows? You could earn a sponsor exemption from Dan Gilbert into next year’s Rocket Mortgage Classic.

THIS WEEK IN DUSTIN JOHNSON-PAULINA GRETZKY PUBLIC DISPLAYS OF AFFECTION

While Brooks followed up a stressful week at Pebble Beach by playing in another tournament, Dustin and Paulina went to the Bahamas: 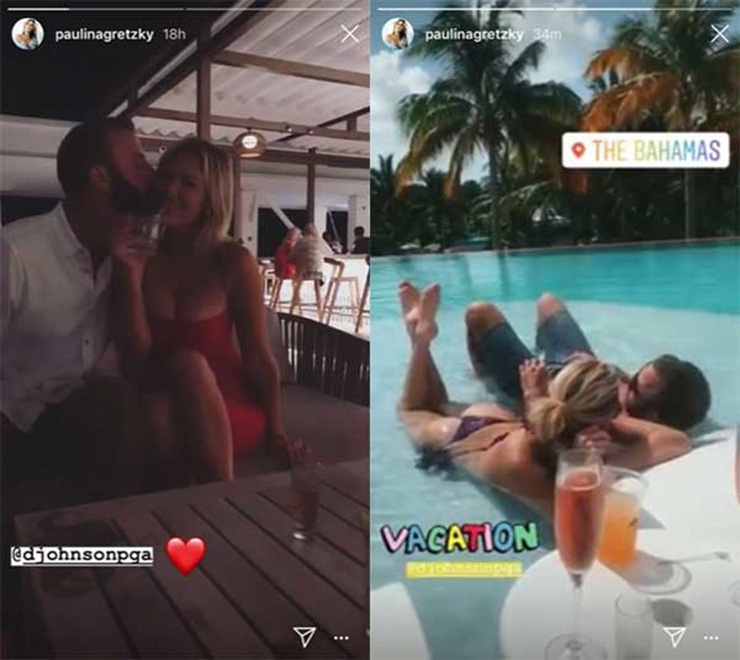 Introducing the first “Phireside with Phil”:

First edition of “Phireside with Phil.”

I’ll be sharing some interesting stories that have taken place through the years and will hopefully have some guests in the future too. #PhiresidewithPhil pic.twitter.com/4NDVTPNKmt

Please let this be a weekly thing.

If you haven’t read Joel Beall’s (latest) great piece on Max Roberts, a high schooler who went from being homeless to state champ, check it out. What a story. . . . Jay Bilas mentioned Louis Oosthuizen multiple times during the NBA Draft. Jay Bilas is officially the world’s biggest Louis O fan. . . . With the British Open heading to Northern Ireland, NBC Sports commissioned a flute version of Yanni’s classic “In Celebration of Man” theme. It’s a nice little touch, but nothing tops the original. Not even the “Rudy” theme song. . . . And finally, we celebrated Father’s Day a week late in my house (Thanks, USGA!) and the highlight was waking up to this delicious bacon-and-egg on a bagel: 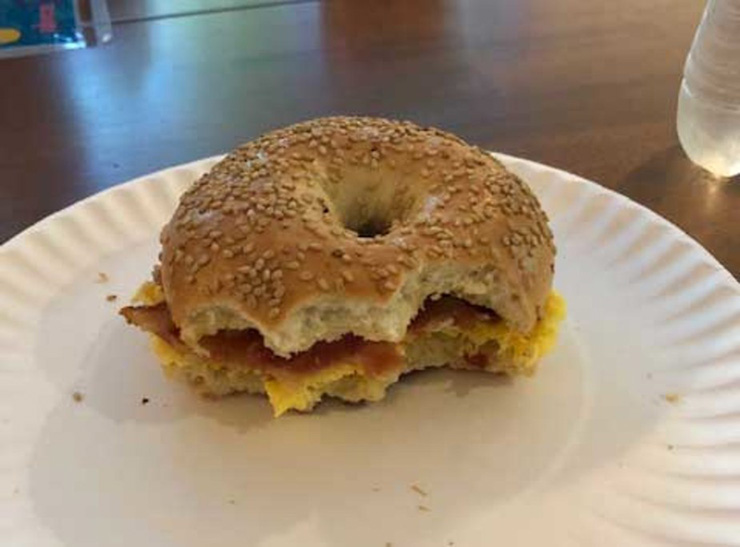 Well, other than spending quality time with my wife and daughter, of course. But yeah. . . that breakfast sandwich. . . mmm. . .

Who is the most difficult tour pro to caddie for?

Should I wear a helmet to the next event I cover?

How much leftover bacon is in the fridge?

It’s Tiger Woods. It’s a major. Is there any doubt he thinks he can win?

The great ones have a knack for persuasion. When an athlete as accomplished as Tiger Woods says something, your first instinct is to believe him. Even if all the evidence points in the other direction.