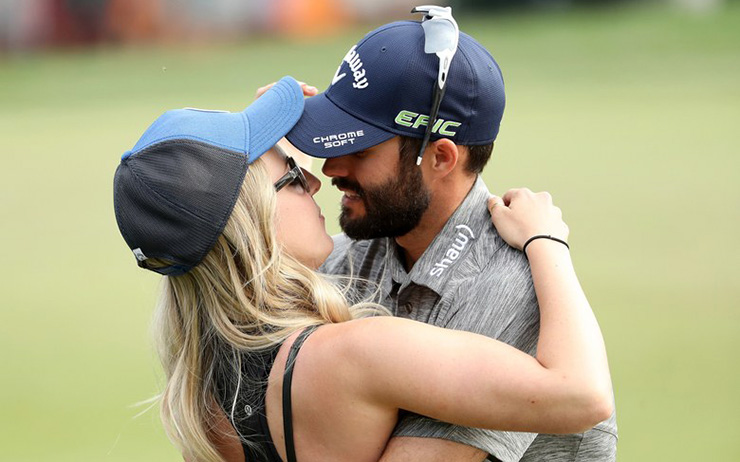 The distance between French Polynesia and Augusta National is roughly 5,600 miles, but for Adam Hadwin on Sunday, it measured 34 feet, most of it navigable by bellied wedge.

Funny game, golf. This Canadian professional with a pending marriage to an American from Wichita followed by a honeymoon in the South Pacific takes a detour to the Masters by using a wedge to lag a putt to tap-in distance.

The honeymoon is off, but the marriage is still on and the celebration began early when Hadwin won the Valspar Championship at Innisbrook Resort in Palm Harbor, Fla., his first PGA Tour victory and an unexpected one that includes a Masters invitation.

It was unforeseen given that the wedding date is March 24, and the 29-year-old and his bride-to-be, Jessica Dawn, had planned to be in French Polynesia during the Masters.

Plans often go awry in professional golf, and after Hadwin opened a four-stroke lead on the field on Saturday, he began plotting change in the event he won on Sunday. “The wedding will happen,” he said, but instead of the honeymoon, “we’ll take a few days to get prepared for the greenest place on earth at Augusta if all goes well.”

All did not go well. Patrick Cantlay, making only his second PGA Tour start since debilitating back issues benched him in November of 2014, relentlessly closed ranks with five birdies in a six-hole stretch and pulled into a tie when Hadwin hit his tee shot in a water hazard and double bogeyed the 16th hole.

“That kind of came out of nowhere,” Hadwin said. “I had really striped it all day and all week. I stuck with the same shot I hit the first three days, a little cut off the left tree. I came up and out of it a little and didn’t have enough to carry it.”

So it came down to the last hole, where Cantlay’s quest was laid to rest by a poor bunker shot that led to a bogey. Hadwin, his ball on the back fringe and nestled up against the rough, had only to get up and down for par from 34 feet.

In lieu of a putter, he chose a wedge with which to putt, striking the ball just above its equator and leaving it a foot short for a tap-in par.

“I want to win golf tournaments,” said Hadwin, who nearly did so at the CareerBuilder Challenge in January, finishing runner-up after becoming the latest tour pro to shoot a 59. “But I hate to win when somebody makes a bogey on 18. I hit two good quality shots on 18 and a great bladed wedge off the fringe there to really put on the pressure. I’m elated to be sitting right here.

“A huge sigh of relief is the biggest thing. I didn’t knock myself out of the tournament at 16, but made it a lot closer than I was liking it to be. Luckily I had a tap-in on 18. I didn’t know if I would have made it if it was much farther.”

Cantlay, meanwhile, finished solo second, for which he earned $658,800 and retained his PGA Tour membership. He had been playing on a major medical extension dating to the 2013 season and needed to earn $624,746 in 10 starts. Still, for Cantlay, it was a hollow victory in the wake of a bitter defeat.

Winning, as they say, is hard. Otherwise Hadwin, for whom winning seemed imminent in the wake of his close call in Palm Springs, would not have scheduled his honeymoon during the Masters.