A Tiger Woods sighting(!), a tour pro couple pitches in for charity, and a “59” you have to see to believe 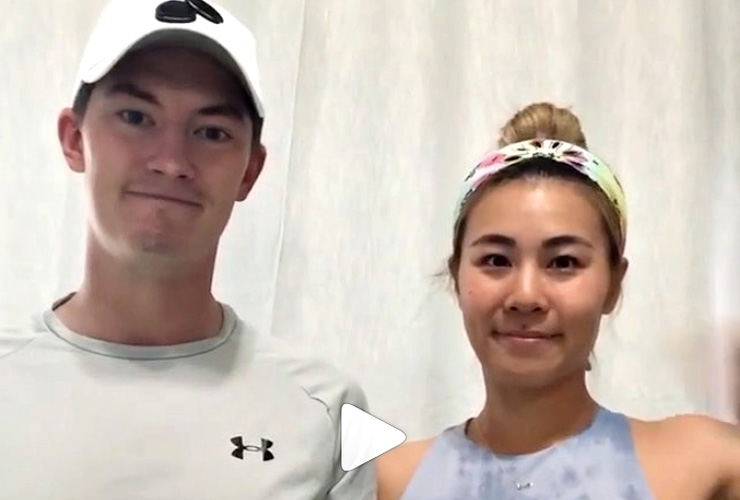 By Alex Myers
Welcome to another edition of The Grind where we miss last year. It was a simpler time when our biggest questions revolved around who was going to win the Masters—and my biggest concern was whether I should place a wager on Tiger Woods. You might recall I even made a parody song about my conundrum:

Our @AlexMyers3 rewrote the lyrics of "Chances" by Five for Fighting to detail his struggle over whether to bet on Tiger at the Masters. 😂

That turned out to be a pretty good omen for Tiger, huh? But a lot has changed since then and we’re not even sure when the Masters will take place again. Of course, a golf tournament is at the low end of peoples’ worries this week, so I promise to not be that guy bitching about not being at the Masters. That being said, I also promise to not be the guy bitching about the guy bitching about not being at the Masters this year. Let’s just agree to be nice to each other during these stressful times, OK? Cool. Now let’s talk about what else is happening—and not happening—in golf right now.

Indoor trick shots: If TikTok and Zoom are the big winners during this dark time, a close runner-up would be this budding genre. Some of the ones floating around the interwebs are unreal. Here’s the best from the amateur division:

I think we can all agree, this is winning so far? #golf #trickshot #quarantine pic.twitter.com/qbbPba3Op0

Meanwhile in the pro division, the master, Joshua Kelley, just continues to raise the bar:

Where are my gamers at?! What video games are y’all playing during the #quarantine 🎮 #inhousechallenge #playingthrough

Which shot was your favorite? 😂 #quarantine #boredinthehouse

No one has ever made the transition to working from home more seamlessly.

This backyard mini-golf course: If you can’t go play golf (more on that later), there are creative ways to get your golf fix at your own house. And these guys might have come up with the best solution:

This backyard mini golf course is next level. 💯
(📹:Instagram/Connorwags) pic.twitter.com/zdt6DoyaxR

Sergio Garcia: People are quick to knock this guy when he does something bad, so it’s only fair to praise him for doing something good. Really good. The 2017 Masters champ and his family has donated more than $250,000 to Coronavirus relief efforts.

Ha llegado la hora de que todos consigamos #nuestramejorvictoria💪🏻 Colabora en el proyecto #CruzRojaResponde enviando tu aportación a ES44 0049 0001 5321 1002 2225 Nuestra donación ya está en camino. ¿Te unes? . 👉🏻link in bio . . . Azalea, our baby boy on the way, Angela and I are joining @paugasol, @rafaelnadal and the Red Cross of Spain to raise money to fight the coronavirus. As a family we are donating €240,000 to go toward the €11 million goal. Click on the link in my bio to learn more and see how you can help the people of Spain.

The Open closed for business: The cancellation of the Open Championship is the biggest blow to the golf schedule yet, as first reported by our Joel Beall and Brian Wacker last week. Nice work, boys, but couldn’t you dig up something a little more positive? Anyway, this is a tough one, made even tougher by part of the report this decision was made so early in part for insurance reasons. Read this:

Hmm. I understand there is a lot of money at stake for the R&A—and it was pretty smart to take out a policy against a possible pandemic—but imagine if the USGA did that for the U.S. Open? Golf Twitter would get off their couches and storm Far Hills, N.J. Well, not now, because we are all under quarantine, but you get the point.

Other postponements: The U.S. Open has been moved to September but will stay at Winged Foot, the PGA Championship has been moved to August and will stay at Harding Park (for now), the Masters is headed to November, and the Ryder Cup will stay in its slot at the end of September. While this all sounds like great news, of course, the only thing we know for sure is the Masters isn’t moving from Augusta National. In other words, it’s all very tentative amid an ongoing global pandemic. Still, let’s keep our fingers crossed. In the comfort of our homes, of course.

Golf course arrests: Three Massachusetts men were arrested for playing golf on a Rhode Island course, a violation of the state’s current quarantine order. And there’s no question the trio knew what they were doing considering they met at a Rhode Island McDonald’s parking lot to load their clubs into a car with Rhode Island plates, and, well, this was the sign posted at the course:

Strange times, but rules are rules. And until Massachusetts lifts its ban on playing golf, these guys might want to check out those videos above for some inspiration. Or drive somewhere a lot farther away. Actually, don’t do that. Just stay put, everyone. Please.

Again, this was to be Masters week. And while it’s one thing for the Valero Texas Open to be cancelled, it’s another to not be watching golf from Augusta National. In fact, this composition from John Huston—not to be confused with golfer Jon Huston—perfectly sums up the mood:

Random tournament fact: On the bright side, CBS will air the 2004 final round on Saturday and 2019 final round on Sunday instead. As far as substitutes go, that’s some pretty strong programming. So grab some popcorn and enjoy as best you can.

—Tiger will serve turkey and stuffing at the November Champions Dinner: 1 MILLION-to-1 odds
—That composer is going to hear from Augusta National’s lawyers: Even odds
—I’m going to cry again watching the 2019 Masters replay: LOCK

A Tiger Woods sighting on Sunday is bound to brighten everyone’s week. Even better? We have an OFF-COURSE WHITE BELT! Alert the fashion police!

Then again, maybe he was coming to or from the course. In that case, he’s excused. In any event, Tiger Woods. Man of the people. Just out and about pumping his own gas. Love it. I just hope he washed his hands really good after.

Longtime PGA Tour caddie Heath Holt took advantage of raised cups at his course and fired the first Coronavirus-aided “59” by firing at the flagsticks all day. Literally. Check it out:

Historic! The best part is when he says his round was saved because, “Luckily, I made a couple 40-footer comebackers. . . for par.” Great stuff, Heath.

THIS WEEK IN TOUR PRO PUBLIC DISPLAYS OF AFFECTION (AND CHARITY)

You know what they say: The couple that raises money together stays together. OK, so we change what “they say” every week, but this is a cool gesture by LPGA star Danielle Kang and her boyfriend, PGA Tour rookie Maverick McNealy:

Hi Everyone! Please listen and read! 👉 $1 = 3 Meals 👈 @mavmcnealy and I have created a new campaign called @challengeeachother 🥰 stay tuned and link in bio! #repost @challengeeachother ・・・ Our NEW campaign called #ChallengeEachOther! It’s to benefit the only food bank in Southern Nevada and they need our help. Stay with us and we’ll give each other challenges and make donations! Please check out the link and if you have any questions please comment below! Thank You!!

And here’s more info on their #ChallengeEachOther campaign:

comment below for any questions! Directions: Step 1. Come up with a challenge Step 2. Pledge the amount and challenge someone Step 3. Post and donate! Simple! Our communities need our help and we’re asking for YOUR help in order TO help. @challengeeachother

How cute are these two? I challenge them to sing a duet of “Anything you can do, I can do better.”

Bubba Watson is preparing for a second career as a trick-shot artist:

And Billy Horschel finally took down the King of Peloton, Rory McIlroy.

We got the 👑. We finally able to knock of @McIlroyRory. He pushed me till the end but was able to hold him off! @alextoussaint25. Thanks for the push Rory! #weallgettingbetter pic.twitter.com/BBWu5pG0wh

Rory later Instagramemed it was supposed to be his “recovery day,” but let’s let Billy have his moment.

THIS WEEK IN GOLF TV PERSONALITIES BEING QUARANTINED

CBS’ Amanda Balionis has perfected whatever this is:

At some point in time, @taniatare63 and I will have a show where she does extremely athletic things and make them look effortless and I succeed every 1 in 100 times and act like I just won a major championship 🤷‍♀️ . . . . 📸/ coaching credit: @brynrenner 🤣

Yeah, we’re getting bored too, Amanda.

U know what helps on a cold November day in Augusta, Georgia? A brand new green jacket

Good call, Max. Although, some Masters-logoed mittens might be needed as well.

Larry David’s Riviera caddie fund seems to have sparked a bunch of similar efforts by other golf clubs. This is like the reverse of his “Spite Store” on Season 10 of Curb Your Enthusiasm. Amazing. . . . Trevor Immelman will take over for Ernie Els as Presidents Cup captain. He also joined us on this week’s Golf Digest Podcast, so please have a listen:

The U.S. Women’s Open is moving to December. As you probably guessed, it is not being held at Winged Foot. . . . And finally, I finally busted this bad boy open: 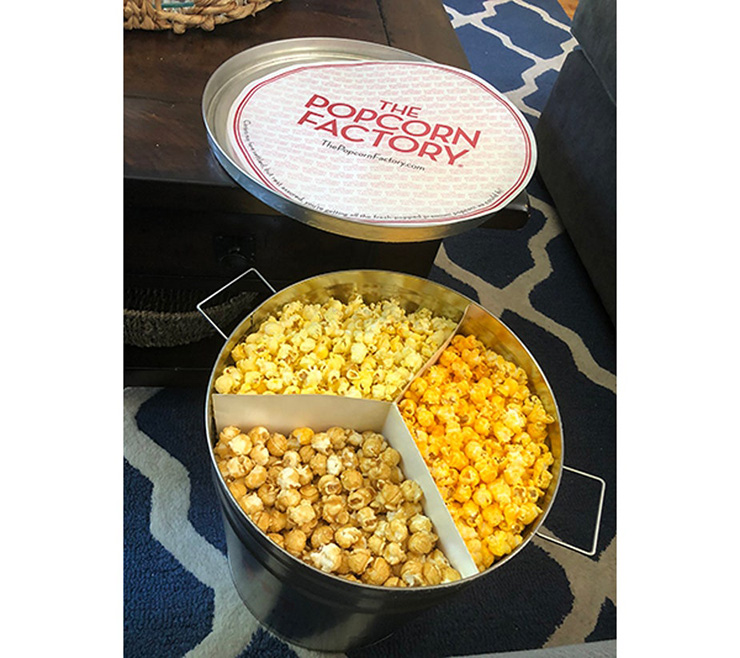 When I said, “Grab some popcorn” and watch some old Masters tournaments this weekend, I mean that in the most literal sense.

What would my handicap be playing with raised cups?
How many white belts does Tiger Woods own?
How many days meals will that tub of popcorn last me?