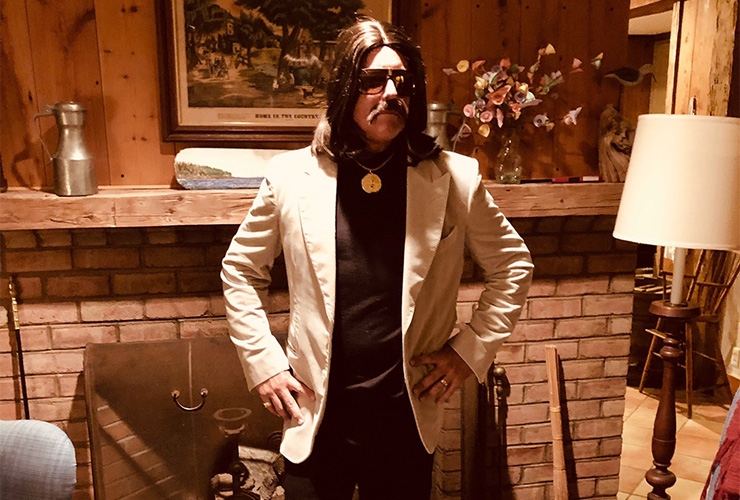 By Alex Myers
Welcome to another edition of The Grind, where we have some tragic news to report, unfortunately. I always thought returning from my annual buddies trip without the green jacket was the worst possible outcome. I never thought we’d return without one of our buddies. Sadly, we said goodbye to Tom Roksvold, 46, way, way too soon. The longtime teacher will be greatly missed by his family, students and golf friends—but he will never be forgotten. Forgive this awful photo taken with a Kodak disposable camera at the 2007 HGGA Championship, where Roks and I won the event’s only ever two-man team championship thanks to a legendary 80 in alternate shot: 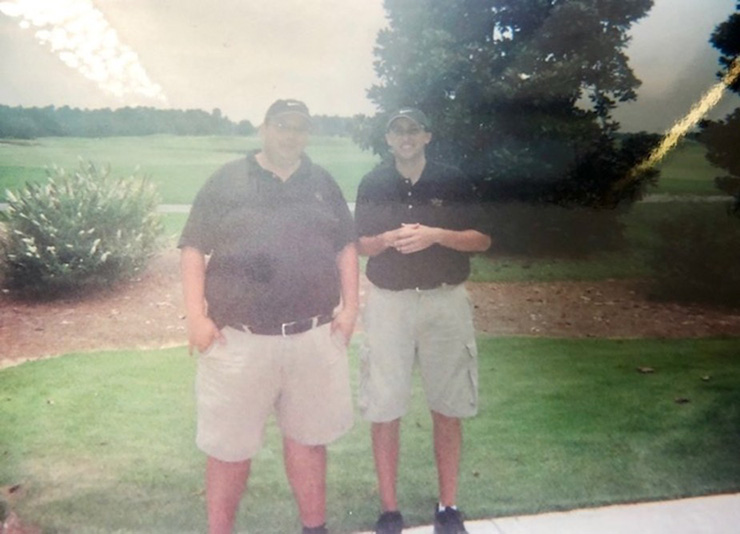 Roks was so into the event that he bought a Wake Forest golf shirt to match the one he knew I was bringing. And he drained the last five putts he looked at and we danced around the 18th green as we had just hit the lottery. Good times. Anyway, with a heavy heart, let’s turn to everything else happening in the world of golf.

J.T. Poston: What a performance by Poston, who is winning the Wyndham Championship matched Lee Trevino at the 1974 Greater New Orleans Open (now the Zurich Classic) by not making a single bogey for 72 holes and winning a PGA Tour event. Remarkable. 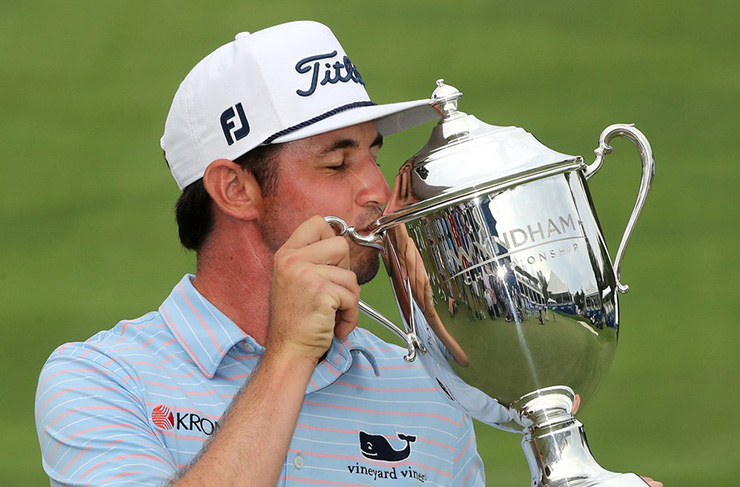 A couple of weeks ago, a newspaper spelt his name wrong when he was leading the Barbasol Championship. And just a couple of years ago, Poston tweeted that he was mistaken for a valet at the Honda Classic and that he needed to play better. Now he’s hash-tagging tweets with “playED” better.

All I can say is WOW!! @PGATOUR winner!! What an unbelievable week in my backyard in NC!! Absolutely loved playing in front of so many familiar faces and to go 72 holes without a bogey. Don’t think I can dream it up any better than that #playedbetter

Well played. By the way, J.T. Poston has a win this season while JT (Justin Thomas) remains winless. Golf is a crazy sport, huh?

Hinako Shibuno: Speaking of crazy, how about this 20-year-old Japanese golfer’s debut outside of her home country at the AIG Women’s British Open? A closing 20-foot birdie gave her a one-shot win over Lizette Salas at England’s Woburn Golf Club. And it’s a good thing it went in because it might have rolled to Scotland if it hadn’t hit the hole:

Hinako Shibuno, " The Smiling Cinderella" drills the back of the cup for birdie to win the 2019 @AIGWBO!

Too bad Mike Breen wasn’t on the call … BANG! In addition to her superb play, Shibuno, who became just the second Japanese golfer to win a major championship, was praised for her pace of play and attitude. She’s nicknamed “the Smiling Cinderella,” and we are looking forward to seeing more of her in years to come.

“The Hovland Rule”: First of all, I’m buying Viktor Hovland, who continued his impressive play since turning pro after the U.S. Open with a fourth-place finish in Greensboro. But second, I’m into the new USGA rule clearly made with him in mind that will allow the reigning U.S. Amateur champ to turn pro and still keep his exemption into the U.S. Open the following year. Had Hovland’s T-13 at Pebble Beach counted toward his PGA Tour earnings, he would have still just missed wrapping up his card for next season (he is eligible to play in the Korn Ferry Tour Finals), but at least he would be roughly $250,000 richer. Hopefully, the Masters will allow its amateur qualifiers to turn pro as well, but it’s the Masters, and the people there do whatever they want, so they probably won’t. And again, it’s too bad the Hovland Rule won’t actually help Hovland.

Dumb penalties: Brendan Steele was docked two strokes for using an alignment stick during a round. This is dumb, A) Because alignment sticks are dumb in general and he could have just used a club or a regular stick instead, and B) Because how did he not realize instantly that using an alignment stick during a round is a penalty? Then there was Josh Teater, who picked up his ball in the fairway because lift, clean and place were used the first two rounds. More understandable, but again, dumb. Not that I should say anything like someone who once just scooped a ball up during a stroke-play event. Unfortunately for Steele and Teater, neither were able to climb into the top 125 and get into the FedEx Cup Playoffs. If they decide to play in the Korn Ferry Finals, we’re betting they won’t commit either of these infractions again. 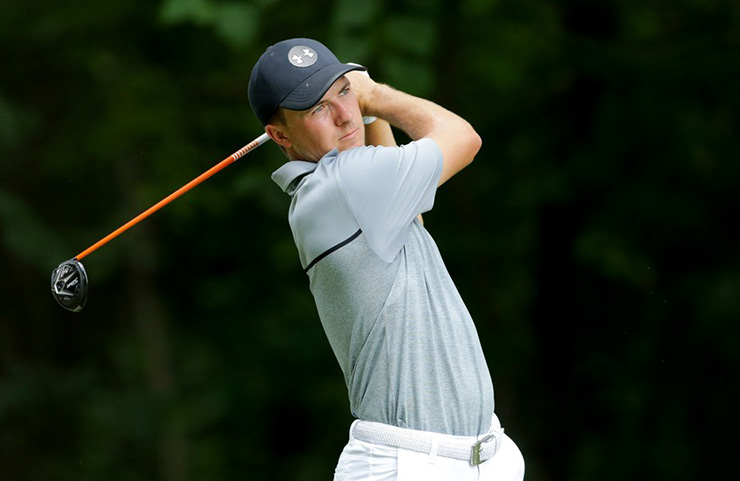 In any event, the struggle is real.

The Women’s British Open venue: I’m sure Woburn Golf Club is a fantastic track, but it seemed odd seeing a British Open being played on a course that looked like it was in central New York. 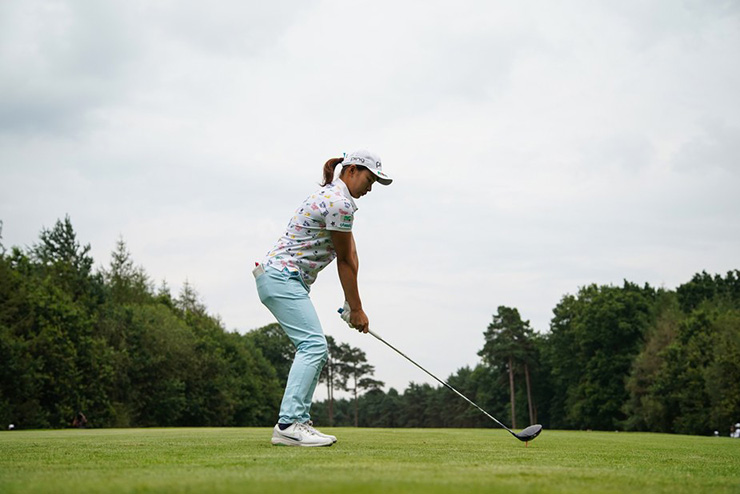 The PGA Tour’s top 125 head to Liberty National, AKA that place with the views of the Statue of Liberty, for the Northern Trust, the first of three FedEx Cup Playoff events. Yep, that’s three instead of the usual four. Another tweak? That bonus has been bumped up to $15 MILLION. For more about the postseason, check out this postseason preview from GolfDigest.com’s newest hire, Greg Gottfried.

Random tournament fact: Liberty National’s 13th hole was the site of Tiger Woods’ famously falling to his knees in pain at the 2013 (Is that enough 13s for you?) Barclays. It’s also the site of his ominous, “Yeah, definitely,” press conference at the 2017 Presidents Cup when he was asked if he could see a scenario in which he didn’t return to professional golf. Fingers crossed that he has a more positive outlook when he plays for the first time since saying, “I just want to go home,” after missing the cut at the Open last month. And in 2009, he missed a short birdie on the 72nd hole to lose to Heath Slocum, the No. 124 player in the FedEx Cup standings. In other words, this isn’t Tiger’s favourite place in the world.

Best part is Jax doesn’t realize our identical twin girls will be coming home soon. @gabby_woodland and I welcomed Maddox and Lennox into the world yesterday

What a year for the Woodlands.

How about Matthew Wolff going full Sergio Garcia on this incredible approach shot?

To clarify, that’s going full GOOD Sergio Garcia. Not the videos of the Spaniard destroying golf courses and throwing golf clubs that have been going viral of late …

SIX-foot-EIGHT at 14?! Good lord, what a beast this guy is going to be.

VIRAL VIDEO OF THE WEEK (EVEN YOUNGER STUDS DIVISION)

Congratulations to Kevin Zhang (10) from Clemmons, NC who made his very first hole-in-one during his very first PGA Jr. League match!! ?? pic.twitter.com/14OvaBuHV5

Bernhard Langer has more trophies than you:

He also has a very understanding wife to let him just toss those trophies all over the house.

J.T. Poston’s caddie, Aaron Flener, when learning his man is paired with Tiger Woods this week:

I know I need to let go of the past, but when you crush the past like this it can be hard to let go of it. pic.twitter.com/6jxJFL7KgV

Admittedly, I thought this was Dick Fowler, P.I., when I first saw it. But nope, it’s Phil. Wow. Just … wow. 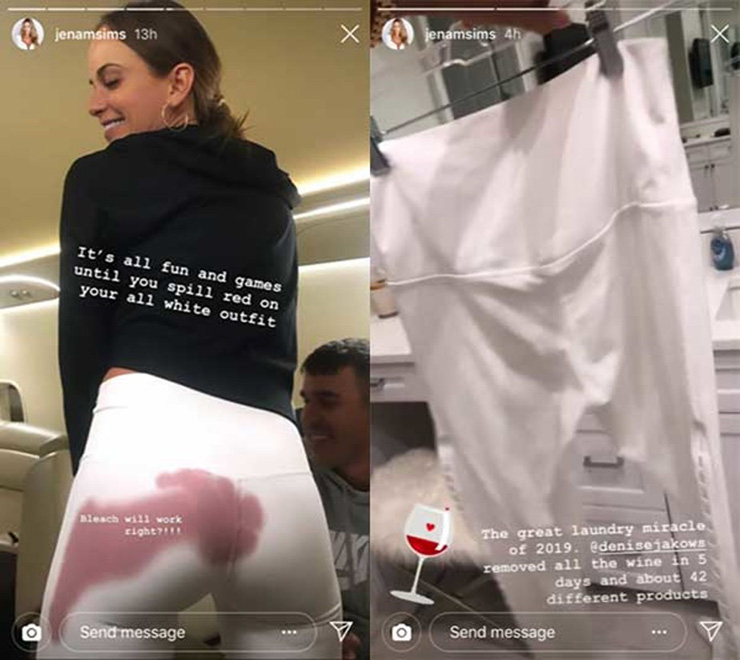 Congrats to NHL referee Garrett Rank, who won the prestigious Western Amateur. Rank also qualified for the 2018 U.S. Open. Talk about having some serious street cred at the next hockey game he officiates. … Congrats to Jake Beber-Frankel, the son of Oscar-winning director David Frankel, who broke Akshay Bhatia’s scoring record at the Junior PGA Championship. And now 6-foot-8 Tommy Morrison is coming for them. … Long Drive champ Maurice Allen hit one across Niagara Falls 14 years after John Daly failed to do so. To summarize: John Daly hits it hard, but Maurice Allen hits it harder. … And finally, one more shout-out to my fallen friend by looking back to when he won his second green jacket at the 2013 HGGA Championship: 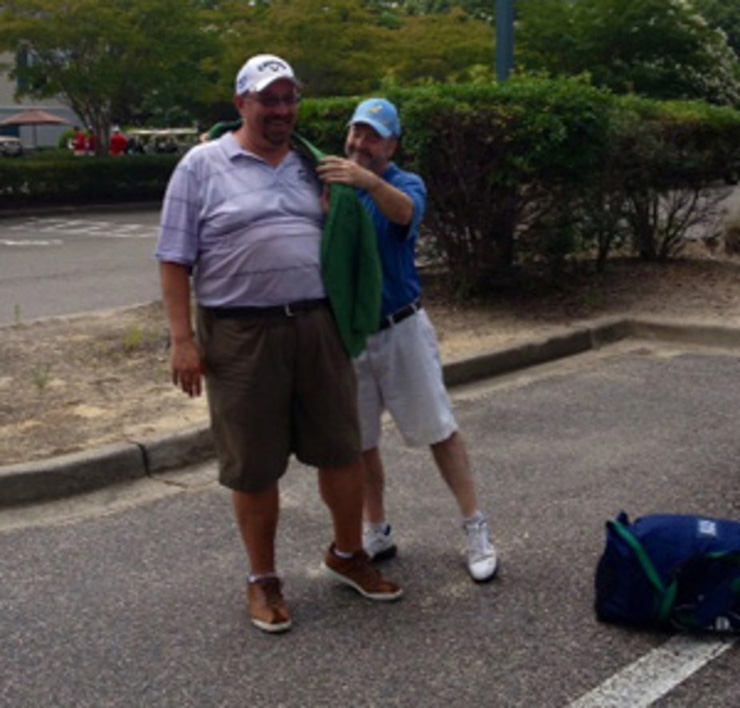 Of course, that was the year he showed up to Myrtle Beach as a “16” handicap. The rest of us had no chance.

Which golfer has the biggest trophy collection?

Can Jena’s friend work on a couple of my golf shirts?