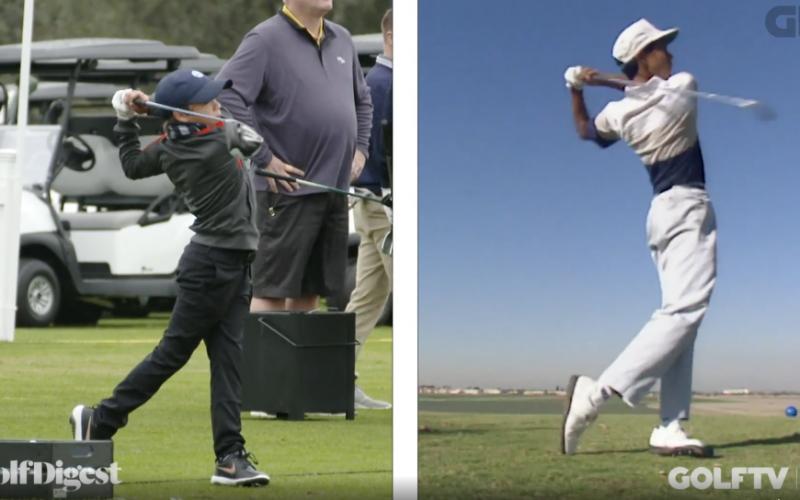 By Daniel Rapaport
ORLANDO — The entire golf world’s eyes seem to fixed on the swing of a pre-teen.

Charlie Woods may be only 11, but he’s the son of a legend and already quite the player of his own. The younger Woods has won multiple junior tournaments in Florida and will make his national TV debut at this week’s PNC Championship, where he will team up with his 15-time major winning father in the event formerly known as the Father-Son.

During Thursday’s pro-am for the PNC, Charlie’s athletic and powerful swing sparked multiple comparisons to the swing of a young Tiger.

Woods spoke in detail with Golf Digest about his son’s move, and how it compares to how he used to swing it when he was a junior.

“Different time and era,” Woods said. “When I grew up, my swing was—the philosophy was different. It was, at that time, people were sliding the legs out, trying to get the high finish. My swing wasn’t quite like that, I turned my hips early, I snapped my legs a little bit. But that was different, at that time, most people at that time wanted me to have a reverse C. K at the top, reverse C on the way through.

“Now as we have a better understanding of the game and how much the ground plays an important part of it, the legs and how they work, Charlie’s swing is different than mine. He uses his legs way better than I ever did, and probably still do. But that’s just the evolution of learning the game.”

Woods said he stresses to his son an old tip that his father, Earl, ingrained in him.

“I stress to him over and over again: You can hit it as hard as you want. All you have to do is two simple things: hit it in the middle of the face every single time, and have a nice finish…that’s what I preach to him all the time. Where did you hit it on the face?

“He feels it. Whether it’s on the heel or toe, whether it’s a little thin, he may have caught it a groove thin—you can feel all that. I think that’s important to have that sense, so you can fix it for the next one.”