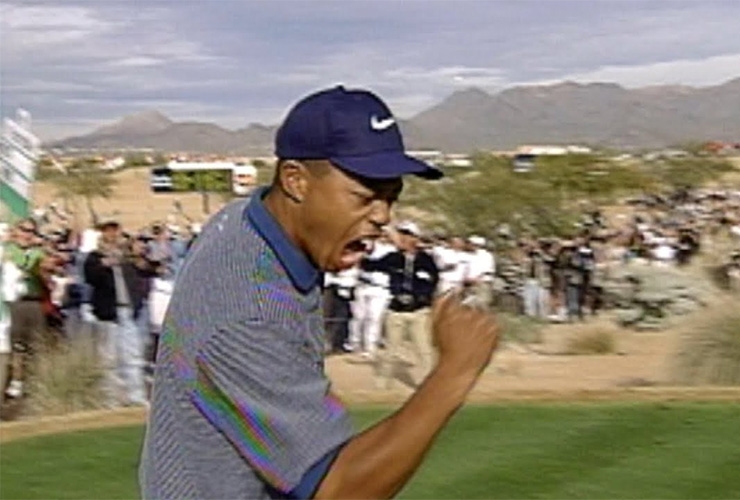 Golf fans found out the latter during CBS’ Sunday re-airing of Woods’ 2019 Masters win. Throughout the broadcast, Tiger talked to Jim Nantz, providing fascinating insight and plenty of emotion. But while discussing Woods’ memorable tee shot on No. 16 last year, the 15-time major winner also let viewers know he’s a 20-time(!) ace maker. His total just happens to have an unexpected twist.

"The best part of my playing days, not one [ace]." @TigerWoods has 20 career hole-in-ones, but when he hit them may surprise you. #MastersRewind pic.twitter.com/z8M27cPQQg

That is just bizarre, but it’s actually something Tiger has mentioned before. In November 2018, he told reporters about his 20th career hole-in-one that was 20 years in the making. The details? A 5-iron from 210 yards at the Madison Club’s second hole. Not too shabby. And pretty cool to do it in front of his son.

Woods’ previous hole-in-one came during the International, a former PGA Tour event, in 1998. He also made aces at the 1996 Greater Milwaukee Open—his pro debut—and the 1997 Waste Management Phoenix Open on TPC Scottsdale’s famed 16th hole. But after three in his first three years on tour, Tiger hasn’t had one since in competition. Pretty wild.

Anyway, if you thought Tiger’s 14-year drought between Masters titles was long, that had nothing on his two-decade wait for his most recent hole-in-one. Something to keep in mind if you’re waiting for one of your own.