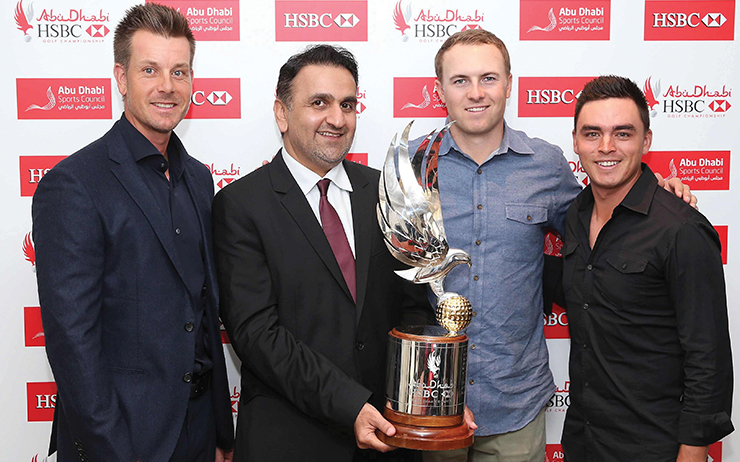 Golf’s new elite – Jordan Spieth, Rory McIlroy and Rickie Fowler – will headline next January’s Abu Dhabi HSBC Golf Championship, along with three-time champion Martin Kaymer and former World No.2 Henrik Stenson. Together they will cap another all-star cast of the world’s best players, who gather in the UAE capital to battle for a share of the US $2.7 million prize purse – the richest on the European Tour’s Desert Swing.

In an event defined by its recent unpredictability, excitement is building ahead of Spieth’s UAE debut. The 22-year-old Texan enjoyed one of the best seasons in golfing history in 2015, winning the first two majors and finishing fourth and second at The Open and the PGA. Spieth went on to capture the FedEx Cup with victory in the Tour Championship to leave no one in any doubt that he is currently the world’s best golfer. With Rory McIlroy ending his own injury-hit season on a high note in Dubai, the stage is set for an early clash at a course that should suit the American, and clearly fits the eye of four-time runner-up McIlroy.

“I am looking forward to coming to Abu Dhabi, especially after Rickie [Fowler] told me about what a fantastic event it is,” said Spieth.  “I love to travel and see the world and I am excited to not only play in the event but also checking out Abu Dhabi for the first time.”

Abu Dhabi Sports Council (ADSC), which owns the Championship, played annually at Abu Dhabi Golf Club to an ever-growing spectator following, believes the appearance of golf’s ‘young guns’ will pull even bigger and more demographically diverse crowds to the event.

“These three young guns are bringing an enormous wave of new excitement to the game – they all have the star ‘IT’ factor,” said His Excellency Aref Al Awani, ADSC’s General Secretary.

“Jordan has already demonstrated his desire to ignite a love of golf and sport among youth – that’s something which really resonates well with us here in Abu Dhabi,” he added.

Four-time major winner and World No.3 Rory McIlroy has his sights focused on winning his first Falcon Trophy, having been the bridesmaid on four occasions, (including last year when unheralded Frenchman Gary Stal stormed from nowhere to ambush final round leader Martin Kaymer).

“Abu Dhabi always brings an outstanding player field, and with Jordan and Rickie competing in January, this will be a superb test for me to start off the 2016 season. I’ve come close in Abu Dhabi several times now, so I’ll be 100 percent ready for January’s challenge.”

Fan favourite Fowler commented: “The past two years have been pivotal in my career. Getting three great tour wins under my belt this year and coming so close in the four majors in 2014 has given me a lot of confidence. I’m feeling more comfortable with my game than ever, and I’m looking forward to starting with a tough test against some of the big names in Abu Dhabi, which I hope will set me up nicely for the season ahead.”

As for Kaymer, the German will be looking for redemption after an extraordinary final day in 2015. With a reputation as a commanding front-runner, the two-time major winner looked to have the championship wrapped up when opening up a 10-stroke lead with just 14 holes to play. But a poor back nine combined with Gary Stal’s birdie charge produced one of the greatest shocks in golfing history.

Despite this disappointment, Kaymer should not be taken lightly by his rivals. In eight appearances at the National, he is a staggering 95-under par. “Abu Dhabi is very special for me. I’ve carded some of my best rounds and had some very memorable victories there, and it would be great to win another Falcon Trophy in 2016.”

The Abu Dhabi HSBC Golf Championship is presented by Abu Dhabi Sports Council.  Tickets and tailored packages are available via the event’s official website: www.abudhabigolfchampionship.com at AED50 for a daily pass and AED150 for a four-day pass.
Guests staying at any Abu Dhabi hotel over the Championship period enter free.