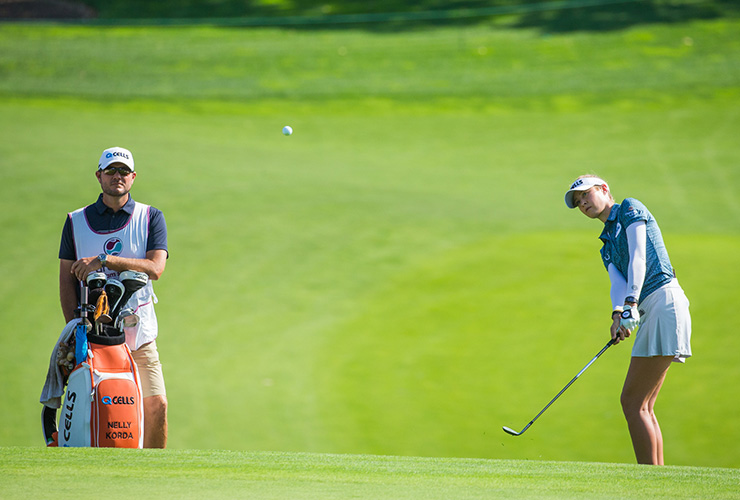 Photo: aramcoteamseries.com
Nelly-Korda during her second round 66 at Glen Oaks Club.

By Special Correspondent
A scintillating early morning 66 by Nelly Korda gave the world No.1 a one-shot lead heading into Saturday’s final day at the Aramco Team Series – New York.

The Olympic gold medalist sits top of the pile in the event’s individual scoring category at nine-under-par. Alison Lee – who bagged her first win as a professional in the Aramco Team Series’ Spain event in August – is alone in second, with fellow Americans Danielle Kang, Lindsey Weaver and Pia Babnik of Slovenia all one shot further back.

In the tournament’s pro-am team format, the British trio of Kelsey MacDonald (SCO), Amy Boulden (WAL), and captain Bronte Law (ENG) – playing with Jordan Ziegler, president at Glen Oak’s Club, this week’s host course – followed Thursday’s opening -15 total by going one better to lead on -31 with one round left to play.

Speaking after her round, Korda said: “I holed out on number four and that gave me a lot of confidence and I made a couple of birdies from there on in. I made a mistake hitting driver on 18 and had a bad lie, then I tried to be smart and couldn’t get out of the rough. I hit some solid wedge shots which I stuck close and had short birdie putts. Tomorrow I’ll go with the flow, stick to my game plan and see how it goes.”

She continued: “I like the event. It’s easy going as you’re not just playing for yourself. It’s new but I enjoy it a lot. You get to bond with the girls you play with, which I enjoy a lot. The tension is a little lighter out there in a sense with the team format I guess – if you make a mistake, it doesn’t matter so much. It loosens you up and is fun.”

Asked what the key was to a second consecutive low-scoring performance in the ATS – NY’s team format, where the lion’s share of the tournament’s $1million prize-fund goes, Bronte Law responded: “Kelsey MacDonald! We know exactly the shot of the day as well: her putt on 16 – I’ve never seen a putt like it in my life. She played awesome today. As a team we also gelled really well again today. When one of us wasn’t birdieing a hole, the other one was. We played really well and maybe we can go one better tomorrow.”

Advancing on MacDonald’s heroic birdie putt – which the Scot herself admitted would have finished 10ft past had it not found the hole – team-mate Amy Boulden explained: “It was at the back of the green, downhill, and so fast it’s almost impossible just to keep the ball on the green from there. Bronte and I were behind the pin watching it and just knew it was going in! It was incredible.”

Jessica Korda said: “Today was very much a team scramble. Early on we birdied the first four or five holes, with someone making a birdie on every other hole. Then we had a lot of clutch pars. It was a complete team effort. We have a good time together out there so tomorrow we’ll just try and keep it loose and see what happens.” 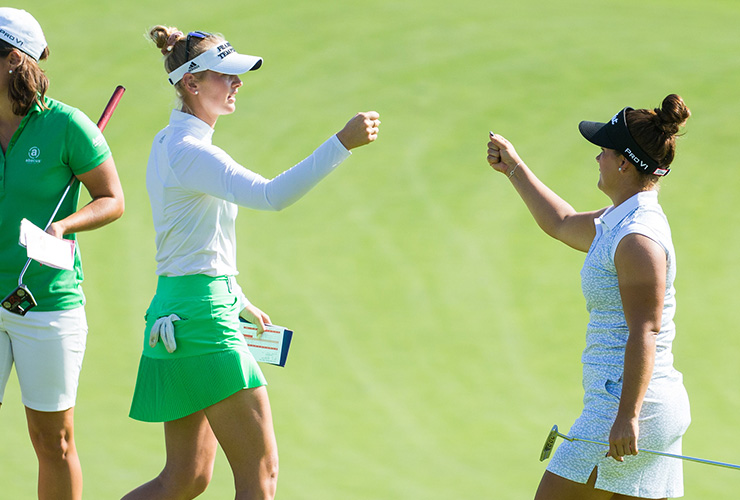