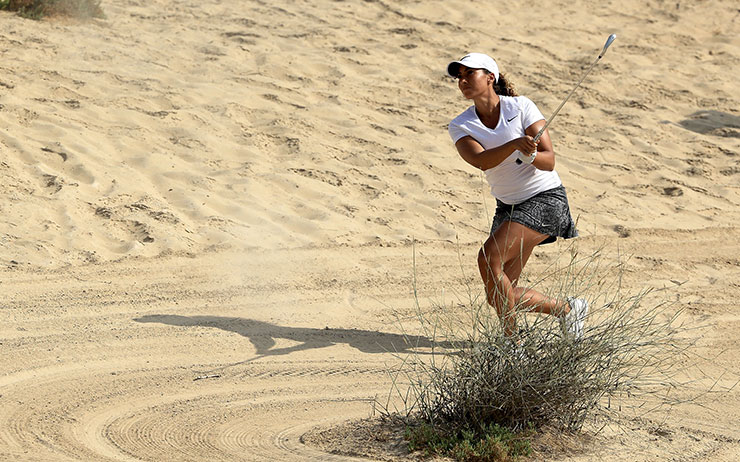 The late double bogey that cost Cheyenne Woods the overnight lead at the Omega Dubai Ladies Masters would likely have elicited much sterner self-recrimination in just about any other circumstances.

But this has been no ordinary start to the 11th edition of the Ladies European Tour season-ender, the tragic death of Austrian caddy Max Zechmann on Wednesday forcing the first round to spill over to Thursday and players to take stock of what really matters.

“It puts a lot into perspective…I’m just thankful to be able to be here today and to be able to play golf,” said Woods after an opening 68 saw her share second place with France’s Sophie Giquel-Bettan at -4, a shot shy of English pace-setter Florentyna Parker.

Woods looked poised to own the lead outright after picking up yesterday where she left off on Wednesday when play was suspended out of respect for Zechmann. Resuming at -4 through six holes, the sporting world’s most recognisable niece rattled off three successive birdies on the 18th, 1st and 2nd holes to lead at -7.

But a bogey on the 4th and the double on her penultimate hole, when she pushed her drive into the sand on the testing dogleg par 4 before playing dodgems with a palm tree, stalled Woods’ momentum.

“Yeah, that was not very good. It was ugly,” Woods said of the setback on the 8th which required a second thwack out of the sand, a chip and two putts to complete.

“Despite that, I thought I played a really solid round. I hit the ball well and gave myself a lot of chances for birdies and my putter felt great, so I’m really happy with today. I feel like I’m in a great position and I think I can do even better tomorrow, so I’m looking forward to it.”

While some struggled to read the Majlis’ quick, carpet-esque greens, the LPGA Tour player cannot wait to wield her new Callaway putter again Friday in the penultimate round of the shortened 54-holer.

“I have a really good vision when I’m out there. I can really see the breaks and feel them. I struggled a little bit with speed towards the end of the round but overall I loved the greens out here and they are in great shape and I’m really rolling the ball well,” said Woods here finished 20th in her only other visit to Dubai in 2014.

“Having a little bit of history out here two years ago I played, it’s kind of nice to have some, I don’t know, some memories of where the flags were, how the greens roll or which way to play the holes. I would say I’m maybe more comfortable with the golf course.”