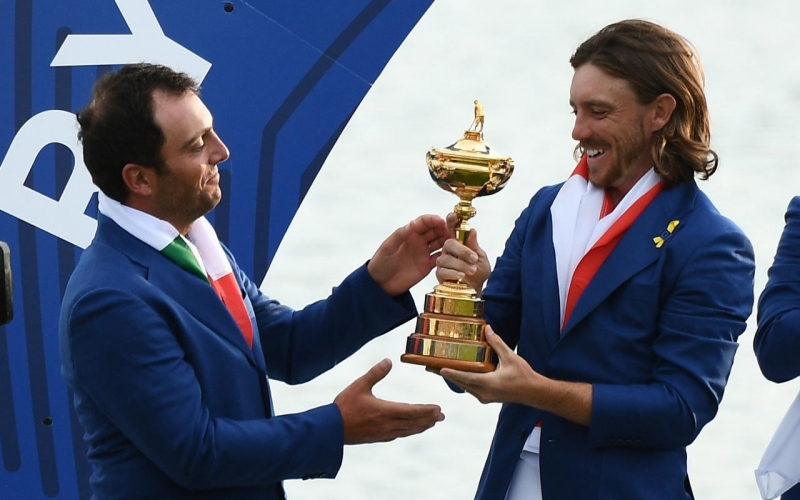 By Joel Beall
The Europeans have it, the Americans don’t. That is the oversimplified, surface-level, talking-head take on Ryder Cup team chemistry, an opinion aired when trying to explain why the U.S. has underperformed for the better part of two decades while Europe’s sum is continually greater than its parts. Those in and around both teams will tell you those sentiments are not entirely true: The Americans are not plagued by eternal dysfunction, and the Europeans are not the merry band of brothers they are made out to be. One does not need to be an insider to realise this conjecture is not wrong, either, particularly on the American side. A good team culture does not beget task forces and back-stabs.

The matter of chemistry is especially tantalizing at Whistling Straits, as it converges—maybe the better word is collides—with the overriding storyline of the season: the feud of one Brooks Koepka and Bryson DeChambeau. The two have said their feelings toward each other will not interfere with the team dynamic, captain Steve Stricker even reportedly getting personal assurances. Of course, they also said their feud was once over and we’ve seen how that song and dance has played out. To think it won’t be hovering over the proceedings like a storm drifting in off Lake Michigan is to be blissfully obtuse.

It’s easy, in this era where analytics rule the day, to devalue or dismiss unquantifiable factors. The degree of Ryder Cup mythologizing by organizers and fans and media and even the players themselves over what is essentially a three-day exhibition also lends credence that maybe this chemistry thing is a bit overblown. In that same breath there’s enough anecdotal evidence to suggest that the Ryder Cup is not solely decided by which 12 players can golf their ball better but something more. That the face of the 2018 Ryder Cup European victory was the partnership and friendship of Tommy Fleetwood and Francesco Molinari—two very good players who made each other great—testifies as much. So what weight does team chemistry have at the Ryder Cup?

“I think it plays to it, in some part,” says Justin Leonard, who appeared on two winning U.S. Ryder Cup teams. “I haven’t been in those team rooms since 2008. But I can tell you in the Ryder Cups that I did play, we had very good chemistry and you come together really quickly.”

Adds Paul Lawrie, who played in two Ryder Cups and served as a vice-captain for Team Europe in 2016. “There are so many points up for grabs in the four-balls and foursomes that pairings and the relationships between players is very important.”

This is all well and good, but that doesn’t change the notion that team chemistry is an abstract concept, and defining what it is at the Ryder Cup is a bit of a paradox, for there’s not a universal explanation for what it is and how it’s achieved.

After all, despite the overuse of “team” by the modern golfer to describe his relationship with his caddie, swing coach, trainer and whoever else is on payroll, the sport remains an individual pursuit. To change that approach that runs 51 weeks of the year for one weekend is no simple task. And while there’s a level of heightened fraternity among professionals compared to the golfers of yesteryear, players are still being asked to look at their competitors, rivals and, in some cases, enemies in a new light.

Paul McGinley competed on three Ryder Cup-winning squads as a player and navigated Team Europe to victory in 2014 as a captain. When he was at the helm, McGinley understood this dynamic of the individual and competitor. Which is why he didn’t alter it but embraced it.

“I let them be 12 individuals rather than a team,” McGinley says. “We had this massive quote ‘The best teamwork comes from men who are working independently toward one goal in unison.’”

McGinley achieved this by allowing the players to bring their own ecosystems with them. For example, Viktor Dubuisson had three friends who followed the Frenchman wherever he went, providing the social support Dubuisson leaned on throughout the year. That’s the antithesis of most Ryder Cup environments, where team and event organizers keep players on a tight, strict schedule that’s a departure from their usual regimen. 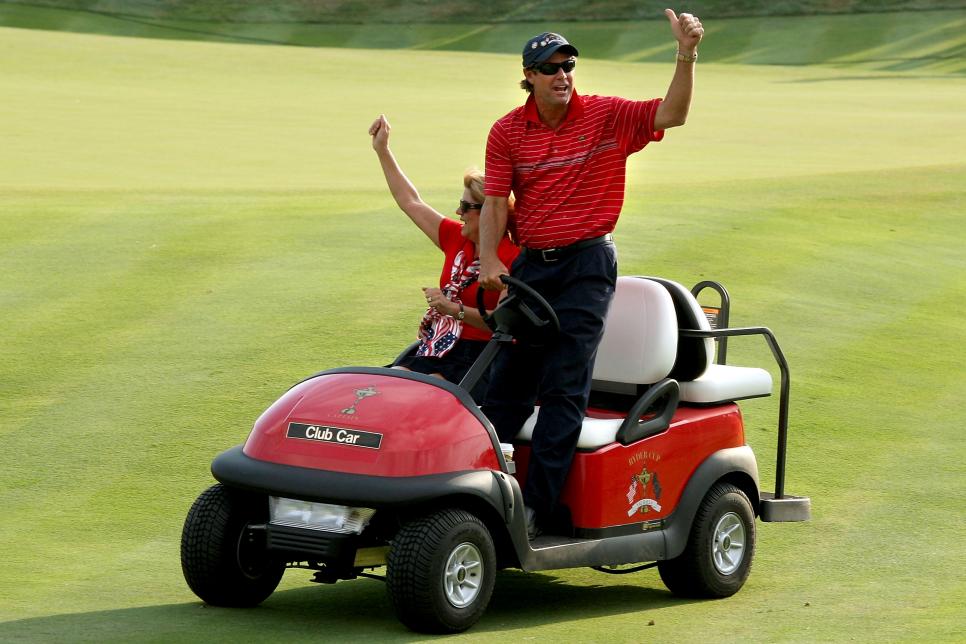 “You are taking guys who are trained from 13 to be selfish,” McGinley explained. “Golfers build their team around them. You have to be egotistical. Very much self-centred. Trying to take that mindset and take them one week every two years is something that can’t be achieved.”

McGinley’s strategy paid off; his 2014 team rolled the Americans 16½-11½. But his is not the only road to victory, and his views are not universally held.

“I really think it happens in a split second once you arrive or see your team uniform for the week,” Paul Azinger says about grasping a team mentality. “Patriotism should be automatic … everyone is inspired when playing for pride and country.”

A member of four Ryder Cup teams as a player, Azinger then led the team in 2008 in a captaincy viewed as the paragon of American leadership this century. He did it, in part, by realizing his old-school insights into the biennial match may not be shared by his team. So Azinger introduced the pod system at Valhalla in 2008, putting four players in the same group to foster unity in a relatively small group.

Three three-man pods were generated from eight automatic bids, with captain’s pick Steve Stricker rounding out the list. Azinger organized those groups according to personality, with each pod picking the fourth player to fill out their group to match their vibe.

“My hope was to give ownership to the players and boost chemistry,” Azinger explained. “Whether you were picking your fourth or being picked as the fourth, I wanted guys engaged and ready to run through a wall for their teammates. I think the real key was that I communicated to the players according to their personality types. From that point on, it was up to the players.”

Azinger’s proposal may not sound forward-thinking, but it was miles ahead of the seemingly grab bag, aw-what-the-hell procedures of the past, and the Americans were only four years removed from the disastrous Tiger Woods-Phil Mickelson pairing at Oakland Hills that sunk the team before it left port.

Leonard was a part of that 2008 team that, sans an injured Tiger, upset a loaded European club. Leonard maintains the pods built chemistry not just by proximity but by eliminating variables.

“I was in a pod with Mickelson and Anthony Kim, and then we picked Hunter Mahan basically to be my partner because Phil and Anthony wanted to play together,” Leonard said. “We ate breakfast together, we ate dinner together. Now we’re all in the same room with the whole team but we sat at a table together. We played our practice rounds together. So we went in knowing ‘OK, this is who we’re gonna play with’ and if something changes up, it’s only gonna change, you know, I’m only gonna be playing with Phil or Anthony. That adds a level of comfort to it.” 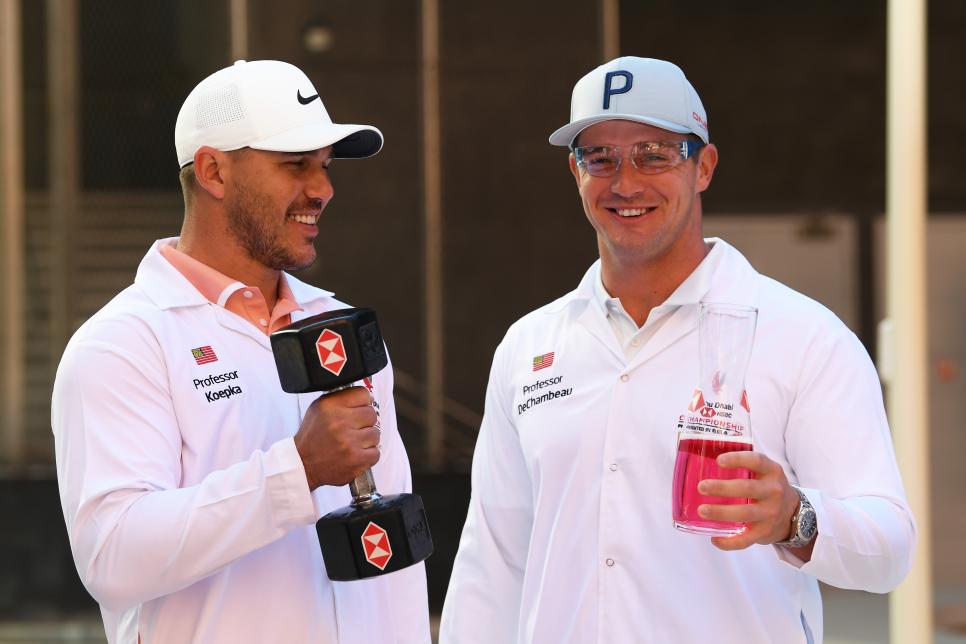 Lawrie insists that’s where chemistry is epitomised, that the heavy lifting is between the foursome and four-ball pairs. Having conviction in your partner heading into the competition’s cauldron of fog can be a 15th club. Although we tend to view chemistry in romantic terms, it is not the byproduct of two players finding a kindred spirit in another, or a pairing bred from luck. It is a calculated equation.

“There’s a huge amount of data and forethought that goes into these decisions and then, when the teams meet, the early part of the week is very important in figuring out who plays well together and gels as a partnership and gets on and understand their partner’s game,” Lawrie says. “Sometimes you think pairings will be a natural fit and it doesn’t always work out for whatever reason. And sometimes guys you’d never imagine would fit become incredibly strong pairings.”

But what about the locker room itself?

Hype videos and podium proclamations are part of the Ryder Cup tapestry, yet it would appear neither side is peppering Ted Lasso-like speeches between sessions (although should the U.S. lose again, tapping Lasso for its next captain should be on the table). Spirit and pep talks are the antithesis of the sport, where stoicism usually wins the day. Such responses, if the wrong tone is struck, could ring hollow or forced.

That seems to be the case for the Americans, at least, who have historically opted for a more workmanlike approach, leaving the emotion up to the partisan crowds. Team Europe, on the other hand, has cultivated an environment that allows this to be the case.

“You do see certain individuals whose personality changes a little bit or you see sides to them you wouldn’t normally,” Lawrie says. “Within a team, different guys assume different roles; some are quiet and self-contained and others a little more extroverted and bring energy. Guys like Sergio Garcia are incredible amongst the group. Huge energy and experience. Lee Westwood’s been involved in so many Ryder Cups and has a lot of experience and he also brings an understanding to the team. Guys like that have seen a lot and have experienced many different captain’s styles so have a wealth of knowledge and can be an important link.”

That’s easy for Lawrie to say. Of course the Europeans get along; they have won seven of the last nine Cups. Which begs the question: Does team chemistry spawn victory or vice versa? Rarely is the winning club noted for its triumph in spite of locker-room rifts, and losing teams are not synonymous with united fronts.

Despite the in-week focus on Bryson and Brooks and their effects on the U.S. club, team chemistry will be judged in hindsight, viewed through the prism of a verdict. Even Azinger, the very man who championed team synergy, distilled his view on chemistry to this:

“Look at who made the most putts at the most critical moments and I think you’ll identify the winner.”