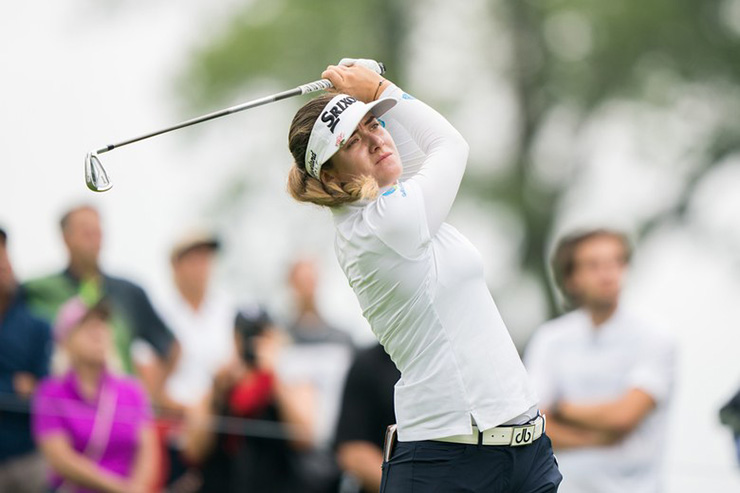 CHASKA, MN – JUNE 23: Hannah Green of Australia hits her tee shot on the fourth hole during the final round for the 65th KPMG Women’s PGA Championship held at Hazeltine National Golf Club on June 23, 2019, in Chaska, Minnesota. (Photo by Darren Carroll/PGA of America via Getty Images

By E. Michael Johnson
Hannah Green felt Hazeltine National G.C.’s bite as she bogeys three holes in a four-hole stretch to turn a nice cushion into a precarious one, but parred the final six holes to win the KPMG Women’s PGA Championship by one shot over defending champion Sung Hyun Park.

To say Green is an unlikely champion would be an understatement. Take away two top-10 finishes in her homeland of Australia and she would have none in her other 33 starts on the LPGA tour. She has just one top-10 this year (a T-10 in her second start of the season), and missed the cut in her last event, which might have led to her win at Hazeltine.

“When I missed the cut [last week], on Saturday and Sunday, I really worked hard on my ball-striking, on the range for quite a long time,” she said after the third round.

It showed. Through 62 holes, Green only endured three bogeys on her card, courtesy of a solid tee-to-green game, which included hitting 17 of 18 greens during a third-round 70. For the week she hit 52 of 72 for a 72.22 per cent clip.

Green’s irons are Srixon’s Z 785—a forged cavity-back made from 1020 carbon steel. The set features compact-sized short irons and progressive sole widths along with extra mass behind the hitting area to promote a soft feel. The sole design also changes through the set to match the attack angles of long and short irons. Her sand wedge that she used for the winning up-and-down from the bunker on the 72nd hole is a Cleveland RTX-4.

“I’ve been getting lucky but I guess winners do get lucky,” she said. “You need to take it while you can.” And on Sunday, she did just enough to take the KPMG Women’s PGA Championship. Unlikely as it might have been.