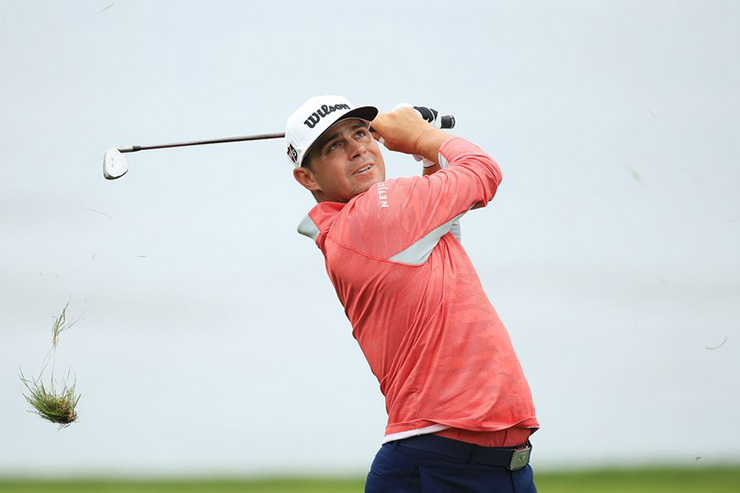 PEBBLE BEACH, CALIFORNIA – JUNE 16: Gary Woodland of the United States plays a second shot on the 11th hole during the final round of the 2019 U.S. Open at Pebble Beach Golf Links on June 16, 2019, in Pebble Beach, California. (Photo by Andrew Redington/Getty Images)

By E. Michael Johnson
Gary Woodland, who won a thrilling U.S. Open at Pebble Beach G.L., was one of the many equipment free agents at the start of the year. When he started considering potential deals, he looked at four different manufacturers, but things quickly fell in place with what some might have felt was an unlikely contender: Wilson.

“I played Vegas, then Mexico, and then I did a lot of testing after Mexico,” Woodland said at the Sentry Tournament of Champions, where the deal was announced. “I had a bunch of stuff sent in—a bunch of drivers, a bunch of irons, and I just fell in love with the [Wilson] irons. And that was the big deal. … Then the deal came together pretty quickly from there.”

The irons, a prototype at the time, eventually became Wilson’s Staff Blade model, a forged muscle-back iron. Woodland, who took out a Wilson prototype utility iron to add the Staff Blade 3-iron on Sunday, uses KBS C-Taper 130 X shafts and Golf Pride Tour Velvet full cord midsize grips on the irons. And when he says he “just fell in love” with the irons, he meant it.

“With Wilson it was just the one set. This is the first ones they sent, so that was easy.” For the week Woodland finished second in greens in regulation at Pebble Beach G.L. en route to a three-shot win over Brooks Koepka.

Woodland also made a golf ball change earlier in the year. Although having some success with Bridgestone’s Tour B X ball, Woodland—who had played Titleist’s Pro V1 in the past—tried the company’s new Pro V1 model and liked the ball’s lower flight, high spin and speed. He asked for some of the balls at the Masters and then played it for the first time in competition at the Wells Fargo Championship—without a formal agreement.

Also among the non-contracted clubs in Woodland’s bag were a Ping G410 Plus driver and Ping G410 LST fairway wood—the latter with which he hit that crucial second shot on the par-5 14th hole that led to a birdie and upped his cushion to two shots. Woodland also finished T-5 in driving distance with the driver, which although stated at 9 degrees loft is actually closer to 7 degrees after the adjustable hosel was moved to the big-minus position. The driver is 44.75 inches in length with an Accra RPG 472 M5+ shaft tipped two inches. The movable weight is in the neutral setting and the swingweight is a hefty D-5.

And now he has a pretty hefty title as well: U.S. Open champion.

What Gary Woodland had in the bag at the U.S. Open