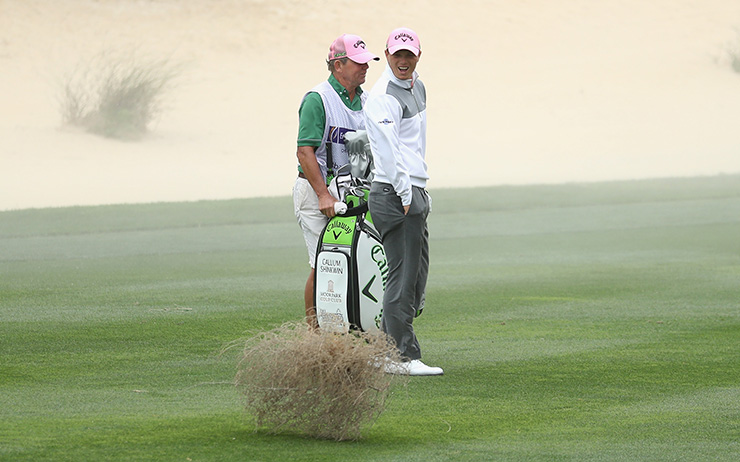 As English professional Callum Shinkwin can attest, it really was a tumbleweed kind of day at the 28th Omega Dubai Desert Classic on Friday.

The wind wasn’t funny from the get go and when Tiger Woods, citing uncontrollable back spasms, withdrew from the $2.65m European Tour event just an hour before his second round tee time, the joke really fell flat.

To cap the craziness off, play was suspended at 2.26pm due to the high winds and, with trees falling, finally called for the day an hour later.

The second round was set to resume at 7.30am Saturday but this might yet prove a scheduling race against time for the organisers as much as a battle of attrition for the players with more wild weather forecast.

South African George Coetzee, three under through eight holes before play was suspended, will return to the 18th hole in the lead at -9, a shot clear of overnight leader Sergio Garcia who was one under through five holes.

Fellow Spaniard Nacho Elvira (through four holes) was solo third at -6 and American David Lipsky at -5 (through seven).

Only 63 of the 129 players remaining in the field were able to complete their second rounds, among them German Martin Kaymer and Spaniard Rafa Cabrera Bello who carded sensational three-under 69s in the conditions to leapfrog 33 places into a share of fifth place at -4 and serious title contention.

The big news, inevitably, was Tiger’s scratching a day after he slumped to an opening 77, the worst of the his 29 competitive loops of the Majlis course by two strokes. 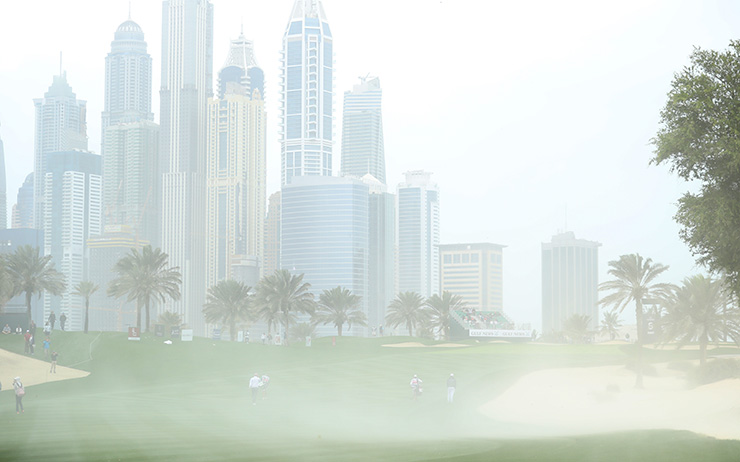 The initial prognosis is optimistic with Mark Steinberg, the former world No.1’s agent, saying the lower back spasms were not connected to the three surgeries Woods has undergone, the last of them in August 2015.

Steinberg doesn’t expect the problem, which flared late Thursday night, to prevent Woods playing the Genesis Open at Riviera from February 16 but there is now clearly a huge question mark hanging over the 41-year-old’s future.

Kaymer, the co-clubhouse leader with Cabrera Bello, summed up the general feeling afterwards.

“Just sad for the golf tournament and sad for us players to see one of the best players, probably the best player in our era, it’s a shame to see,” the two-time major champion said of Tiger’s Dubai demise. 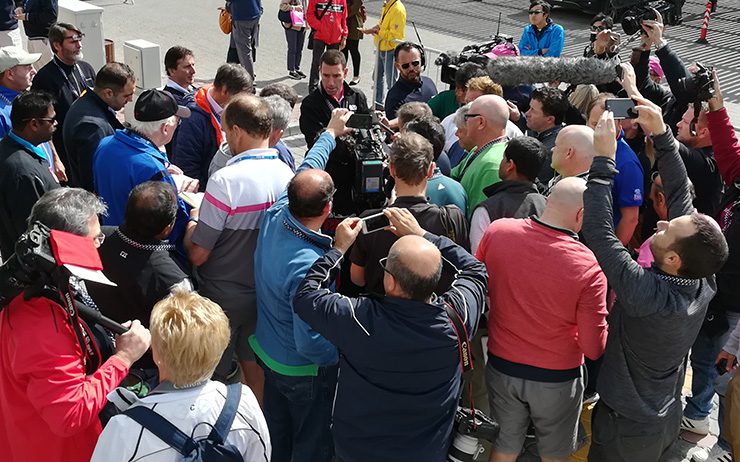 “Well, I think with the start he had, I think he had a lot of work to do to play the rest of the week all the way,” the Swede, in a temporary share of fifth at -4 through five second round holes, said.

“Again, it’s a question of him being healthy. I mean, if he’s going to be out here playing, you’ve got to be 100 percent. Once again, he needs to take care of his injuries obviously.”

For the record, Shinkwin, captured by Getty Images’ Warren Little in the strangely poetic main picture, was +5 with nine holes of his second round to play. The projected cut was +1.

Dubai-adopted Indian amateur Rayhan Thomas, a star on day one with his 68, was even par through three holes of his second round.