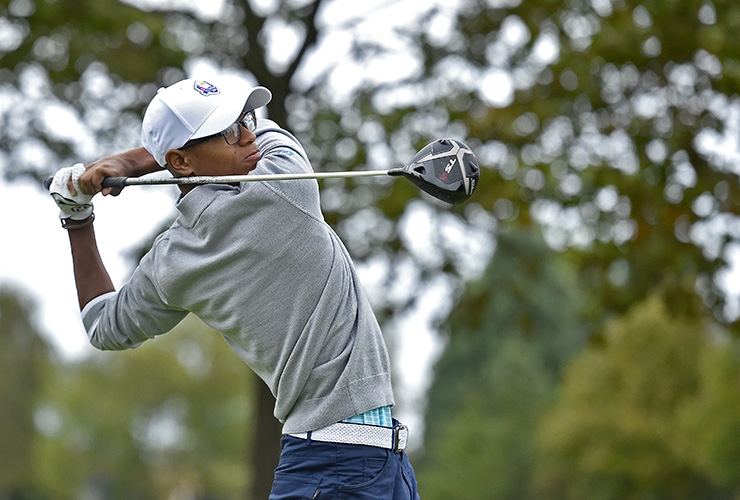 Aurelien Meunier/Getty Images
File: Robin Williams swings during a practice round prior to the Junior Ryder Cup at Disneyland Paris on September 23, 2018, in Paris, France.

By Kent Gray
Robin ‘Tiger’ Williams is poised to become just the third amateur winner in the MENA Tour’s colourful eight-season history on Wednesday. Even more impressively, he’s on track to achieve the rare feat in his debut appearance on the regional Pro-Am circuit.

The 18-year-old Englishman extended his first-round lead at the Journey to Jordan-2 tournament Tuesday from one stroke to five with an impressive, six-under-par 66 around Ayla Golf Club.

If the Peterborough-based England age-group rep can hold his nerve in Wednesday’s final round – and there is nothing thus far to suggest he won’t –  he’ll become the circuit’s 20th wire-to-wire winner and join Dubai’s Rayhan Thomas and Dutchman Pierre Junior Verlaar as amateur champions. Thomas created history as the first amateur winner when he captured his home Dubai Creek Open in 2016 while Junior Verlaar won the Royal Golf Mohammedia Open in Morocco the following season.

Check out this short interview with Williams, whose middle name is Tiger, after he added the 66 to his opening 68 to move to 134 for the championship, 10 under par.

He is making his first start on @theMENATour and he leads by five shots going into the final round.

This is what the talented @IAmRobinTiger had to say after his second-round 66… pic.twitter.com/ItauF83bDk

Daniel Gaunt, the Australian who won the Troon Series- Al Zorah Open in February, is Williams’ closest pursuer on 139 after rounds of 70-69. Four players, including South African MG Keyser, the highest placed pro in the Order of Merit (OOM) in the field this week at No. 3, and amateur OOM pace-setter Curtis Knipes (England), share third place on 140.

Zane Scotland (143), the MENA Tour’s most successful player with 10 titles, inched into the top 10 with a second-round 71 while the Jack Floydd (ENG) in solo seventh on 141 made it three amateurs on the first page of the leaderboard.