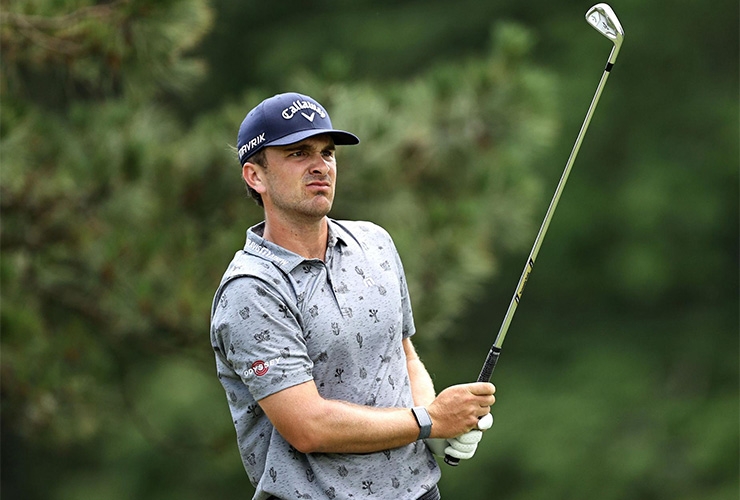 Will Gordon hits his tee shot on the fifth hole during the final round of the 2020 Travelers Championship. Elsa

By Brian Wacker
One man’s pain is another man’s pleasure. Will Gordon wouldn’t disagree.

Needing to finish in a two-way tie for third or better Sunday at the Travelers Championship to secure special temporary membership on the PGA Tour, the 23-year-old with no status on any tour was clinging to just that position following a final-round 64 at TPC River Highlands. But with a handful of golfers lurking close behind and still on the course, there was no guarantee he’d stay there.

Then Brendon Todd, alone in second after making 11 straight pars (and not making a bogey since Thursday), hosel-rocketed a chip shot on the par-4 12th. He went on to triple bogey the hole, dropped from just two strokes off the lead to five back and never recovered.

More importantly, at least as it relates to Gordon, it helped open the door for the 2019 SEC Player of the Year out of Vanderbilt. Gordon briefly moved into a tie for second before settling back into a two-way third, with Mackenzie Hughes at 17-under 263, two back of winner Dustin Johnson, to secure his status and earn unlimited sponsor’s exemptions for the rest of the season.

“Woah,” Gordon said when he was informed of the mess that Todd had just made.

A similar reaction would be appropriate for Gordon’s recent rise.

RELATED: DJ wins and four other takeaways from Sunday at the Travelers

Playing on sponsor’s exemptions—which is how he got into the Travelers—and in Monday qualifiers is a tough path to the PGA Tour. Still, Gordon managed three finishes of T-21 or better in six PGA Tour starts, earning enough FedEx Cup points to qualify for the Web.com Tour Finals, where 25 PGA Tour cards would ordinarily be handed out in the end-of-season series.

The only problem? The Korn Ferry Tour Finals were cancelled this year because of the 3½-month shutdown from the COVID-19 pandemic, meaning players on that circuit won’t have a chance to earn a promotion to the PGA Tour via Finals until the fall of 2021.

A win, meanwhile, would have given Gordon a two-year exemption on the PGA Tour, but he almost missed out on special temporary status, too.

After opening 66-62, Gordon stumbled on Saturday, shooting a one-over 71. On Sunday he was cruising, though, with a half-dozen birdies through his first 16 holes. Then he three-putted from 28 feet on the difficult par-4 17th.

“Unfortunately that one the lag putt I hit wasn’t very good and the wedge shot wasn’t very good,” Gordon said. “That bogey was kind of started from the fairway. So I wasn’t too upset, just tried to reset and play the 18th well.”

Gordon hammered a 336-yard drive down the fairway, stuffed his wedge to three feet and made the putt for birdie.

“I knew the higher the better, so I was watching the leaderboard coming in,” he said. “I knew if I got up there T-1, T-2 by the end of [my] 18 holes that I might finish in the top three.”

It doesn’t hurt, either, that Gordon spent the break playing practice rounds with fellow Charlotte, N.C. resident Webb Simpson, whom he calls a mentor.

“It just furthers my belief in myself that I can hang with those guys,” said Gordon, who took home $436,600 for his T-3 showing. “I think the more I’m around those guys I just get more confident.”

After all, a little help can go a long way.