PACIFIC PALISADES, CALIFORNIA – FEBRUARY 16: Adam Scott of Australia looks on as he walks to the 18th hole during the final round of the Genesis Invitational at the Riviera Country Club on February 16, 2020, in Pacific Palisades, California. (Photo by Katharine Lotze/Getty Images)

By Shane Ryan
Following his win at the Genesis Invitational on Sunday, Adam Scott left no doubt about the magnitude of his optimism. “I really do believe if I can maintain motivation and focus, the next five years can be my best years on tour,” he said in his victory presser.

And why not? After earning 2½ points in a Presidents Cup he cared deeply about in December, he went on to win the Australian PGA Championship, took a couple of months off and then broke an almost four-year PGA Tour victory drought by holding off Matt Kuchar, Rory McIlroy and Dustin Johnson, among others, to win at Riviera. For the first time since May 2017, Scott is back in the top 10 of the World Rankings, he’s learned to work hard and smart simultaneously, and he’s collaborating with Bradley Hughes, the hottest coach in golf today. With the Masters looming, the Aussie has every reason to believe he’s on a massive upswing, and that he can redefine his career in the next half-decade.

Scott has always been very honest about wanting a grander legacy than the one he’s earned to date. As far back as 2014, I asked him whether major victories were a fair measure of a career. Considering that Scott only had one at that time—and still does—I expected him to argue against the case. Instead, he told me emphatically that it was fair.

“History has shown that the greatest players have ended up accumulating the most of these tournaments,” he said, “and I think it’s probably a fair assessment of who the greatest players over time have been in each decade and each era.” Left unspoken was the implication of his words, which is that Scott himself lacked a certain lasting greatness due to his relative underachievement in the majors.

After his win this past weekend, the 14th of his PGA Tour career and 28th worldwide, he was more explicit, saying, “the big goal is to be a multiple major winner.” No ambiguity there. It’s the ultimate focus of his recent work, and it’s the pinnacle point he’s attempting to reach as he approaches his 40th birthday in July. 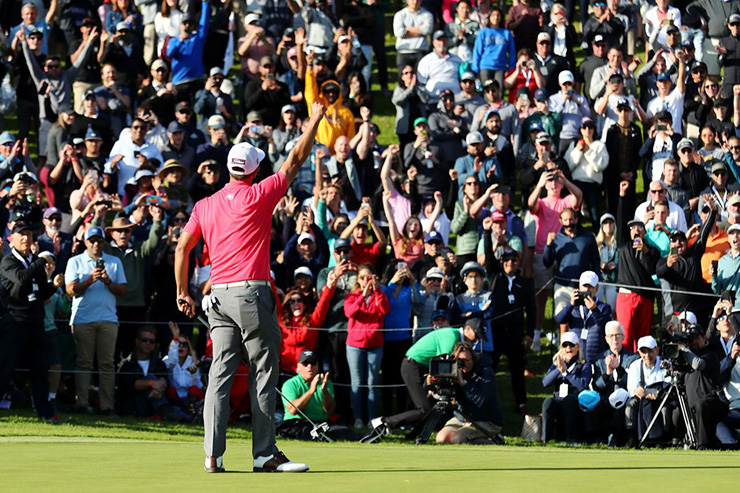 It’s not that Scott ever got lazy, per se—according to him, it was a combination of life changes (children, specifically) and not understanding how to work, even when he was pushing himself hard. Those factors can hamper focus, and they conspired to frustrate him deeply as he sank to 82nd in the World Rankings in the bleak summer of 2018.

It wasn’t the first time he’s been down, and what we’re seeing now is not his first comeback. In fact, I would call it the fourth true surge of his career. The first happened at the outset, when he embarked on a gradual climb from being a merely a curiosity among golf cognoscenti, propelled by his 2004 Players Championship victory. He won steadily after that and stayed inside the world top 10 until 2008, when he began a fall—spurred on by a break-up with his longtime girlfriend (now his wife), a freak injury to his hand and recurring illness—that would drop him to No. 76 by the fall 2009.

The second climb took a couple years, but in 2013 Scott won the Masters and in 2014 he reached World No. 1 for the first time. The next dip was more modest, and when he emerged from that mini-slump and won twice on the PGA Tour early in 2016 (Climb No. 3), there was talk of the old Scott returning to finish what he had started. Contrary to prophesy, those would be the last Tour events he’d win until the Genesis last weekend. And as he makes his way into the major season this year, he’ll have to prove that this is more than just another false spring, that the latest resurgence is something more profound. 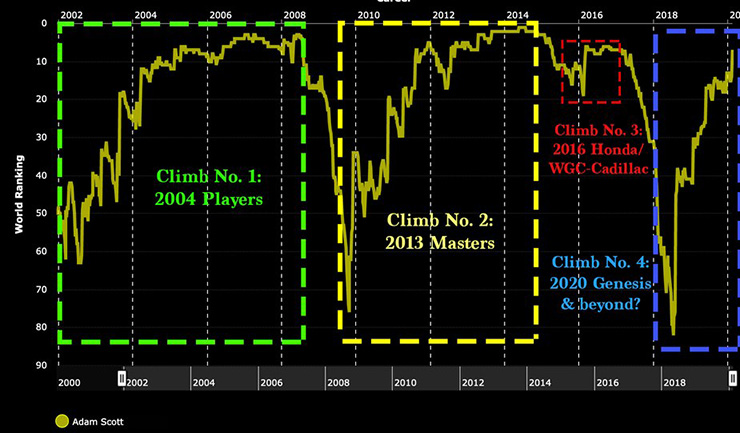 This chart of Scott’s World Ranking over the years shows the ebbs and flows of his career.

If there’s reason to believe this time is different, objectively, it is starting to appear in his ShotLink statistics. In 2016, despite the two tour wins, Scott ranked 129th in strokes gained/putting at -.168 (after being 157th the previous season). In 2017 and 2018, his ranking was equally humbling (128th and T-165), but last season showed progress as he jumped to 31st at .348. It was the first time he had a positive sg/putting number since 2014 and just the second time in 12 years. Thus far in the 2020 season (which has a small sample since Scott has played just five events), he ranks 15th at .691.

From the sound of it, Scott knows it may be his last chance, and he knows it won’t be easy. “Everyone tells me I’m turning 40 this year,” he told reporters on Sunday. “I don’t know if they’re insinuating that’s kind of the beginning of the end … there’s no doubt, I mean, the age of guys peaking is getting younger. There’s far less dominant players in their 40s today than there was before … I’ve got to make the most of that while I’m out here. It’s only going to get harder probably. I hope I’m the exception to the rule and kind of play like Vijay [Singh] did in his 40s.”

If Scott’s game can stand the test of Riviera and the competition he faced on Sunday—nine of the world’s top 10 were in the field—it’s plenty good enough to give him a fighting chance at the four biggest events of the season. The two questions, as always, are whether he has the focus to maintain this form, and whether he’ll have the killer instinct to seize the opportunity if one presents itself.

“You’ve got to be mean inside,” he said in 2004, before the final round of the Players Championship. “I’ll be Mr. Tough Guy tomorrow.” He was as good as his word, and he won that event with a Sunday 70 that kept him one shot clear of a red-hot Padraig Harrington. 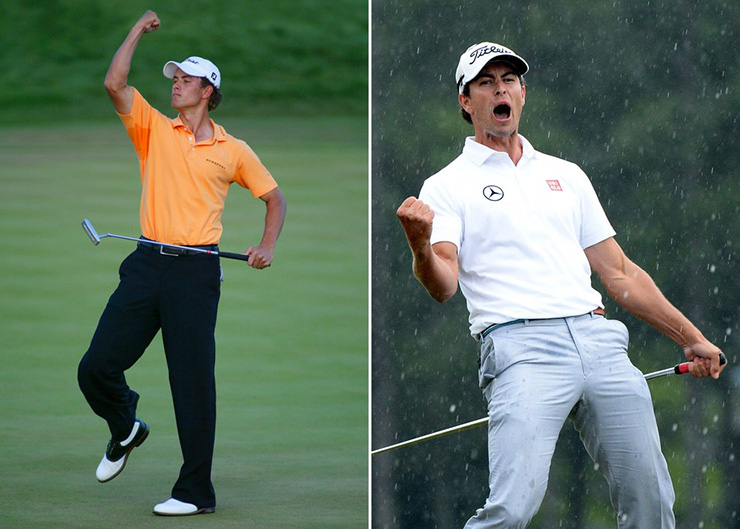 Scott continues to look for a comparable win to his 2004 Players and 2013 Masters triumphs. (Getty Images (2))

But Scott couldn’t sustain that toughness in the long term, and it would be nine years before he lived up to the promise of that day and won a major. Seven years hence, he’s yet to nab another.

Scott may be on the verge of 40, but it’s a healthy 40, an almost youthful 40. To think of him as a fading star would be wrong; in fact, he’s a man on the rise who seemingly has learned to balance the competing elements of his life and rediscover the love that spurs him to dogged work and great victories. He’ll forever be known as a gentleman, a near-anachronism in his quiet dignity, but it’s nice to see there’s still a kind of ambition burning within.

This could be the start of something profound: In a far-off dream, he defies the odds and wins two more majors to permanently alter the way he’s remembered. The possibility doesn’t escape him. Rare among golfers, he’ll speak the desire out loud. He’s aware of the moment, almost painfully so. All that remains is the impossible task of seizing it.