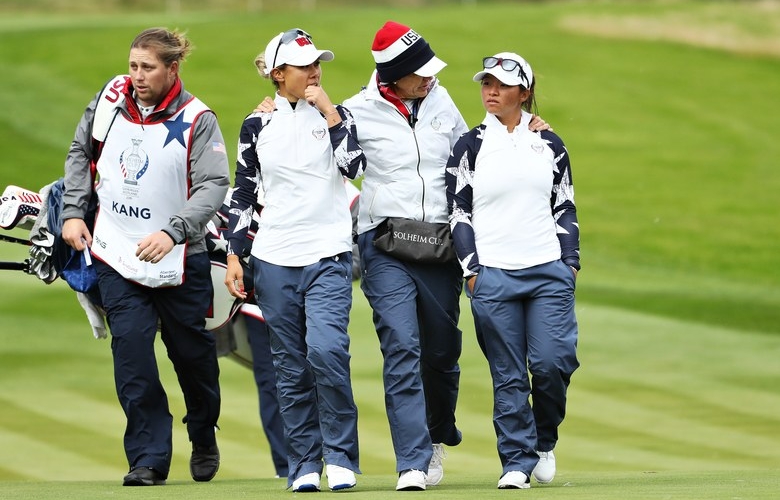 Megan Khang and Danielle Kang of Team USA are consoled by Team USA captain Juli Inkster after they lost their match during Day 2 of the Solheim Cup at Gleneagles on September 14, 2019 in Auchterarder, Scotland. (Photo by Jamie Squire/Getty Images)

By Keely Levins
GLENEAGLES, Scotland — Juli Inkster has been using her “pod system” in each of the three Solheim Cups she has captained, following the lead of U.S. Ryder Cup captain Paul Azinger, who successfully used one in the 2008 Ryder Cup. In Inkster’s version, she has had players take personality tests, then based on the tests and their style of play has matched them accordingly into three four-player pods.The idea is that players are paired only with other players from their pods, a microcosm of a team within a team.

It has worked. Inkster has captained two victorious teams and is trying to make it three straight at Gleneagles. So, naturally, she employed the pod system once more.

These are the pods this year:

On Saturday in Scotland, however, Inkster went outside of her pods for the first time, when she paired Salas with McDonald in the morning foursomes. She did it a second time in the afternoon four-ball, when Altomare and Park went out together, then a third time in four-balls with Thompson and Alex.

Mixing up the pods yielded varied results: Salas and McDonald lost in the morning. Altomare and Park won in the afternoon, and Thompson and Alex halved. The overall result of the day, however, was a success. The U.S. began the day one point behind Europe, and it enters Sunday singles all square.

Though Inkster’s switching up the pods didn’t yield perfect success, it suggests she’s willing to listen to her players. When someone doesn’t want to play with someone else, they apparently feel comfortable enough to speak up.

“I’m not hitting the shots; they’re hitting the shots,” Inkster said. “Their name is on the back of their caddies’ jerseys. So I’m trying to put them in the best position to succeed. That’s my job.”