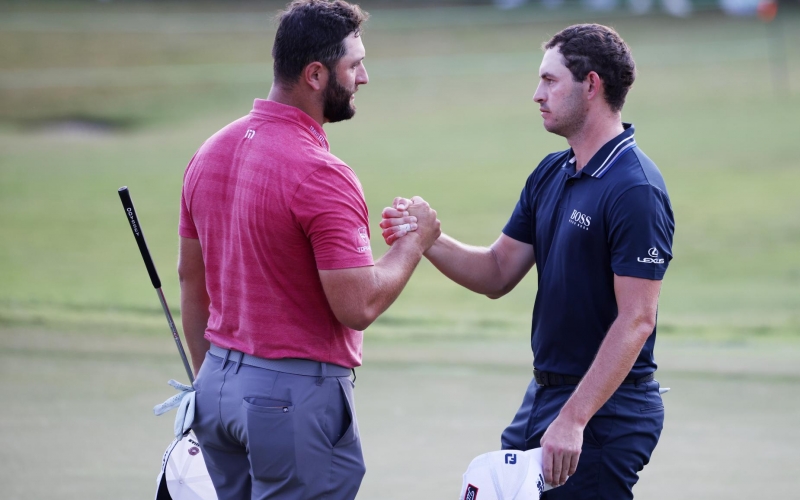 By Golf Digest Staff
Jon Rahm was nine holes away from winning the Northern Trust, and with it Rahm would have secured Player of the Year. But Rahm stumbled down the stretch at Liberty National, and a mere 13 days later the POY title is very much a debate with Patrick Cantlay inserting himself in the conversation with a torrid finish to win the FedEx Cup.

Is Cantlay’s playoff run, coupled with wins at the Memorial and Zozo, enough to capture the award? Does Rahm’s body of work, highlighted by a breakthrough at the U.S. Open, give him the honors? How much should Collin Morikawa be penalized for a rough postseason? Is there a viable case for anyone else? Our Golf Digest writers weigh in with their choices for Player of the Year?

Shane Ryan: As a stats nerd, this one is extremely easy for me—it’s Jon Rahm. He led the Tour in strokes gained, and he led the Tour in scoring average. This means, divorced from any other concerns, he was pound-for-pound the best golfer of the season. It doesn’t mean he should be golfer of the year, at least by itself, but it does mean that if he won a major, which he did, somebody else better have done something spectacular to overtake him. Patrick Cantlay won the FedExCup, but he didn’t win a major. Collin Morikawa won a major and a WGC, but he faded at the end of the season and his numbers weren’t as good as Rahm’s. Hideki Matsuyama won a major but never put his stamp on the year with a second victory or godlike stats. Phil Mickelson won a major, and, well…that’s about it.

Rahm didn’t win another event either after the U.S. Open, but he tied for the best 72-hole score at the Tour Championship with Kevin Na, he would have won the Memorial if not for a positive COVID test, and he had 15 top tens when nobody else even had ten. There are usually some very good debates when it comes to the player of the year race, but I don’t see 2021 as anything but definitive. It’s Rahm; any other answer is a stretch.

Alex Myers: Cantlay is going to win Player of the Year. The precedent was set when a major-less FedEx Cup champ Rory McIlroy beat Brooks Koepka in 2019. That doesn’t make it right.

Cantlay was incredible down the stretch and wound up with twice as many wins as anyone, plus the FedEx Cup, but it was Rahm who played the best over the entire season by virtually every other metric. In addition to his U.S. Open win, he had as many top 10s as Cantlay and Morikawa combined. Oh, and if you give him credit for a win at the Memorial where he was playing arguably his best golf of the year before a 54-hole WD (and take Cantlay’s win there away), his two wins including a major easily trumps Cantlay’s three. And for those who think winning the playoffs should be the clincher, isn’t taking home $15 million enough of a prize?

Daniel Rapaport: It’s Rahm, and it’s really not that close. The only argument against his candidacy are wins, golf’s equivalent of rings. If Rahm had three or even two, this wouldn’t even be a conversation. I fully understand that he didn’t win the Memorial or this week’s Tour Championship. The record books leave no room for interpretation, which is fine. I also fully understand that he led by six after 54 in Columbus and lost to nobody this week in Atlanta. Those two things—he didn’t win, but I know he played the best—can and do exist at the same time. Subjective votes like these ask us to use our brains, not the record books. Ask yourself: who was the best player this year? We all know the answer.

Joel Beall: Rory-over-Brooks should be viewed as an aberration rather than precedent. (Or as revenge, the tour’s punishment for Koepka calling the majors the only weeks that matter. We kid. We think.) Cantlay missed the cut at the 2021 Masters and Open Championship, and his best finish out of this superseason’s six majors was a T-15 at the 2021 U.S. Open … won by the very man he’s competing against for the award in question. Throw in failing to make the weekend at the Players and it is incongruent to give Player of the Year to someone who didn’t show up for the biggest events on the calendar.

That doesn’t mean Rahm gets our nonexistent vote, however. While we agree with the theoreticals about the Memorial and Tour Championship, they are just that, theoreticals, and the hard truth is Rahm has a lone win to his name. Morikawa? A great year … just not great enough (20th in scoring, 25th in strokes gained). All of which is a long-winded way of writing our choice is Bryson DeChambeau.

No, this isn’t a take strictly to be contrarian. To DeChambeau’s credit, he did bag Winged Foot and Bay Hill while finishing second in strokes gained and fourth in scoring. But no one commandeered this 50-event stretch like the big beefy man. He challenged our idea of what tour golf should be and where it is going and how it is discussed. He was a weekly storyline, not always in the manner or vein he wanted, yet there’s no doubting Bryson the player and personality was a constant in our lives, and with Tiger on the sidelines, he has become the sport’s main attraction. In good ways and bad and occasionally odd, this was the Season of Bryson.