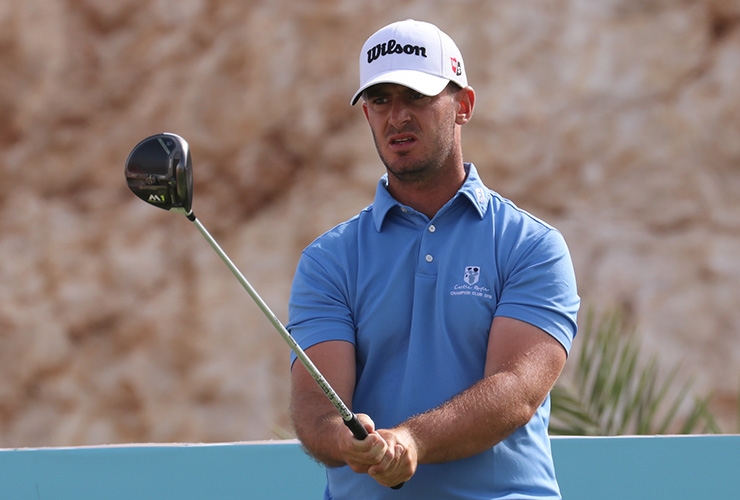 By Kent Gray
Only nine players boast multiple wins on the MENA Tour by Arena, most of them taking a fair chunk of the regional circuit’s previous eight seasons to achieve the notable feat. David Langley has a shot to become the 10th – just three weeks into the ninth season.

A stunning seven-under-par 65 Tuesday propelled Langley to -10 through 36 holes and to the summit of the $75,000 Ghala Open leaderboard and will see the 25-year-old Englishman take a one-stroke lead into Wednesday’s final round over a gaggle of five players.

After winning the season-opening Journey to Jordan #1 Championship and backing his dream debut up with a T-8 finish at the inaugural NEWGIZA Open in Cairo last week, Langley’s impact on the regional development tour has been instant and mightily impressive. Victory in Muscat would add to the fairytale and hand the rookie Marlow professional a scarcely believable start in the European Tour’s $1.75 million Oman Open next week.

It would also give Langley a sizeable lead in the season-long Journey to Jordan race which promises precious 2021 European and Asia Tour starts to the eventual Order-of-Merit title winner.

“I think I have gained strokes in driving every day this season on the MENA Tour and yesterday was probably the only round when I did not gain strokes in putting. I played so well in the final round in Egypt, but I guess I was trying too hard over there and shot just two-under when I had a very low one in me that day. A tied eighth finish is pretty good, but I learned a lot from that round, and from Jordan. So, hopefully, we can get the job done tomorrow.”

Let’s just say England’s @DavidLangley59 is on a roll. He won in Jordan and finished inside the top-10 in Cairo. On Tuesday, he shot a seven-under par 65 to currently lead the Ghala Open by one shot.

We asked him what was he doing particularly well to enjoy this purple patch… pic.twitter.com/eOubmltJLr

Starting from the 10th tee, Langley’s round was highlighted by a spectacular slam-dunk eagle when he holed a wedge from 84 yards on the par-4 11th. His only bogey came soon after on the 14th hole, but with 16 greens in regulation, he was never in any major trouble after that and also picked up shots on all four of Ghala Golf Club’s par-5s.

“It was a pretty good day. When you start with an eagle like that, it’s always good,” said Langley who improved to No. 1187 in the world rankings after his win in Jordan.

“I flew it straight into the hole and I feel sorry because I damaged the cup a bit. Made a silly error on the 14th, and missed a short birdie putt on the 17th, but apart from that, it was solid golf.”

India’s Dubai-based Arjun Gupta is the leading amateur courtesy a splendid round five-under-par 67 that took him up to tied 16th place, two ahead of Russian 16-year-old Ivan Striganov (74).

There was also a proud moment for Saudi golf as all three players in the field – professional Othman Almulla and amateurs Saud Al Sharif and Ali Alsakha – made the cut, which fell at two-over-par.

Such an amazing moment for Saudi golf!! All three players in the field at @theMENATour’s Ghala Open – professional @o_almulla_golf and amateurs Saud Al Sharif and Ali Alsakha- have made the cut!!