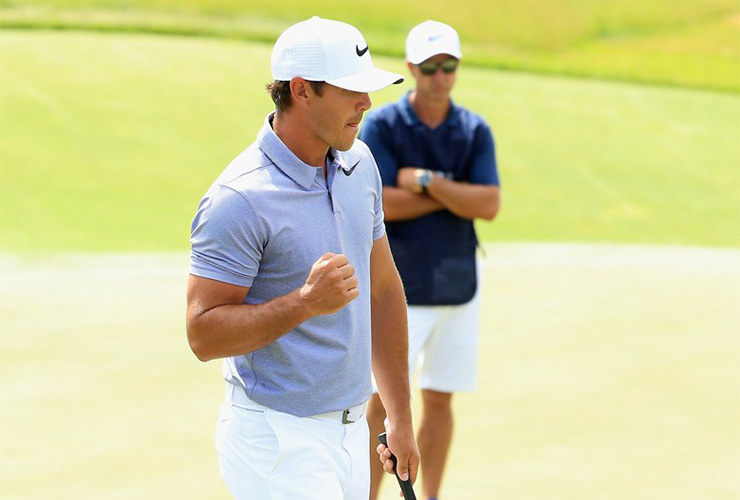 HARTFORD, WI – JUNE 16: Brooks Koepka of the United States reacts after making a birdie on the 16th green during the second round of the 2017 U.S. Open at Erin Hills on June 16, 2017 in Hartford, Wisconsin. (Photo by Andrew Redington/Getty Images)

Of the players in contention to win the U.S. Open at Erin Hills, Brooks Koepka is the least likely to be overtaken by the moment. It’s not that he doesn’t care. But perhaps because Koepka didn’t grow up fixated with golf, he doesn’t talk about major championships in reverential tones.

“To be honest, I’m not a big golf nerd,” Koepka told Golf Digest’s Jaime Diaz last year. “Golf is kind of boring, not much action. I come from a baseball family, and it’s in my blood.”

So how does a golfer, always immensely talented but perhaps lacking that obsessive gene, reach a level where he can grab a share of the lead in the national championship? Enter Dustin Johnson, another power-hitting, flat-lining golfer who broke through to win his first major at Oakmont last year. Since both golfers work with the father-son tandem of Butch and Claude Harmon III, they’ve grown closer, working together on the course and in the gym, and Koepka says it’s Johnson who has motivated him to squeeze more out of his game.

“We’re super close,” Koepka told Golf Digest’s Tim Rosaforte. “We train just about every day together, and talk about the mentality of winning. He’s been great mentor and one of my best friends, and being able to watch him over the past year-and-a-half has helped me because I realize the work that needs to be done to be No. 1. It’s a competition in everything we do either in the gym or on the course, so it’s good for me.”

The evidence of that influence can be found in this video of Johnson and Koepka toiling away, alongside their shared trainer Joey Diovisalvi, and Johnson’s brother, Austin, in the game after Thursday’s opening round. In part because Koepka values competition away from the golf course, those workouts can engage him just as much as tournament play.

“BK is very much a non-golfer,” Claude Harmon, his primary instructor, says. “So I think being around DJ has stoked the athletic fire in him. The workouts all together feel like a team for him. And working out with DJ motivates him big time.”