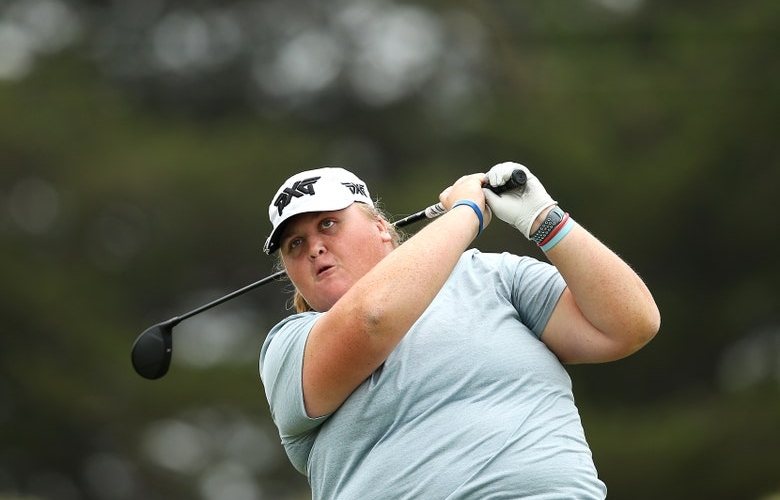 Jack Thomas
Haley Moore off the 14th hole during the first round of the 2020 ISPS Handa Vic Open.

By John Strege
Golf’s utility beyond competition and camaraderie is its contribution to sanity. What would we do without the rub of the green? It allows us to weather the bad bounces in golf—in life, too—for which we may or may not be responsible, though in Haley Moore’s case, she unequivocally deserved better.

Moore, who because of her size, was a victim of considerable bullying in high school. Yet she forged ahead and found her footing and a following in her college years that included her dramatically holing a birdie putt in a playoff that in 2018 won Arizona an NCAA championship. In 2019, she realized a dream 16 years in the making by qualifying for the LPGA.

Now an LPGA rookie, Moore, 21, was looking forward to what should have been one of the best weeks of her life, a rare home game, the Kia Classic at Aviara Golf Club in Carlsbad, Calif., a short drive west of her home in Escondido. It was scheduled to begin a week from Thursday.

“I was pretty excited about it,” she said a few days ago. “I spent the past couple of months going out there a couple times a week with a good friend of mine who used to work at the golf course.”

The friend explained to Moore the course’s nuances, the undulating greens that require approach shots from the proper side of fairways. “I got really comfortable with that,” she said.

It heightened her anticipation of playing with family and friends in her gallery. “That would have been pretty cool,” she said, noting as well the advantage of sleeping in her own bed and enjoying the comforts of home.

Moore had done her homework and then … the wickedly bad bounce, the coronavirus. The LPGA, as are all other major sports organizations, is in a hiatus with no discernible end, one that likely will have left her with only one start through at least the first four months of her rookie season—her LPGA debut in January at the ISPS Handa Vic Open in Australia.

“I was pretty devastated,” she said, this her immediate reaction after the LPGA postponed its next three events. “But I knew it was the right thing to do. They don’t want us to have any risk out there. They’re going to do their best to reschedule them. I stand totally behind their decision. You just deal with it and go on.”

Perspective, acquired via hard knocks, is part of her arsenal.

Then there was the phone call, the day after Commissioner Mike Whan’s announcement, one that helped assuage any lingering fears. Moore is disinclined to answer when she doesn’t recognise the phone number and she did not recognize this one.

“It was Commissioner Whan,” she said. “He left me a voice mail.” Whan explained his decision and relayed his concern. “He was more worried about the rookies, who are anxious to get started out there and are now on hold. It frustrates him.”

It frustrates Moore, too, notably because this is now her livelihood and money is an issue. Last May, she opened a Go Fund Me account to help finance her initial foray into professional golf, including three stages of Q School, the cost of which were $2,500 a stage.

She has raised more than $38,000 from more than 270 donors, including $6,000 alone from a Facebook group, the Peloton XXL Tribe, “a group of 7,500 women and men who are on their own journey to overcome weight and body-shaming issues and become empowered to achieve great things through sport. I’m now one of The Tribe!” Moore wrote on her Go Fund Me page.

“That was pretty cool,” she said. “A couple of these members live in Phoenix, and I got to stay with two of them already. They said I’m always welcome to stay with them when I’m in town for a tournament.”

She is there now, playing in a Cactus Tour event at Moon Valley Country Club, the first of three added to the mini-tour’s schedule, notwithstanding coronavirus fears.

The Go Fund Me account helped finance her trip to Australia in January, where she overcame nerves with an assist from her playing partner Cheyenne Woods and shot a 66 in her LPGA debut. Then the winds arrived, and though she made the 36-hole cut, she missed the 54-hole cut, shooting 79 in the third round. She still earned $5,494 and banked at least an equal amount of important experience.

“Playing with Cheyenne Woods was actually pretty cool. She’s a really nice girl and made me very comfortable. Starting off that good was kind of relief. But it was super windy on Saturday, the kind of wind I’m not used to, but I know I could get that wind in Hawaii or Europe or Texas.”

Martin Luther King Jr. once said, “we must accept finite disappointment, but never lose infinite hope.” Golfers can’t control how a ball bounces, only how they react to bounces that don’t go their way, and Moore has reacted with equanimity that belies her age.

Maturity, that’s part of her arsenal, too.