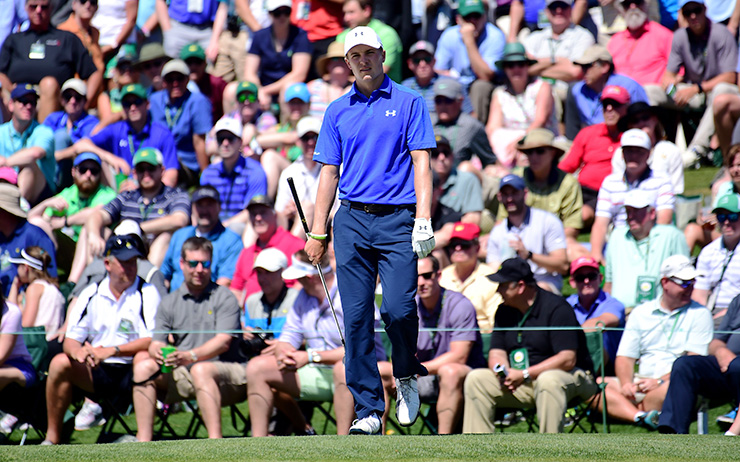 AUGUSTA, Ga. — Jordan Spieth departed the Masters for the second-straight Sunday having deposited a ball in the water at Augusta National’s 12th hole. Rickie Fowler had to endure that sinking feeling of allowing a golden opportunity to win his first major drown in imperfection.

Paired together in the penultimate group during the final round and carrying the American standard in the absence of World No. 1 Dustin Johnson, Spieth and Fowler were expected to pressure third-round co-leaders Justin Rose and Sergio Garcia. Instead, though theirs was the glamour pairing, the duo soldiered glumly through the inward nine—out of contention, off television coverage, frustrated and forlorn.

“It was bizarre. It was just a little bizarre,” said Spieth, the 2015 Masters winner, who finished outside the top 10—or, more precisely, outside the top two—for the first time in four appearances.

It was bizarre because it was so thoroughly unexpected.

Two players comfortable with the circumstances and with each other as Ryder Cup and Presidents Cup teammates, and obviously close to top form, failed to summon the appropriate tools for the occasion. Their respective performances seemed void of emotion as well as exactitude, as if they were too relaxed amid the swelling multitudes of fawning supporters.

Fowler began the day a stroke behind the leaders after a steady third-round 71, while Spieth, coming off his second-straight 69, was only two back. That constitutes prime position on golf’s most prime real estate.

The duo, who famously vacationed together in the Bahamas with two fellow players following last year’s Masters, ended up tied for 11th at one-under 287, eight behind the European pair, who settled things in a playoff won by Garcia. Spieth stumbled early, perhaps the most shocking development of the afternoon given his Masters record, but the Texan salvaged a three-over 75 with birdies on three of the last four holes. Fowler, meanwhile, having his best shot at a major since 2014 (when he famous finished in the top five in all four of the year’s big events), bogeyed the final three holes to absorb a 76.   Admitting he never felt better in a major, Fowler was expecting to have fun and feed off all the positive vibes. “Him and I could potentially get off to a good start, and we could really push each other,” Fowler, 28, mused on Saturday evening. “We’ll try and pull the best out of one another. It’s always fun when you’re playing with one of your good buddies.” 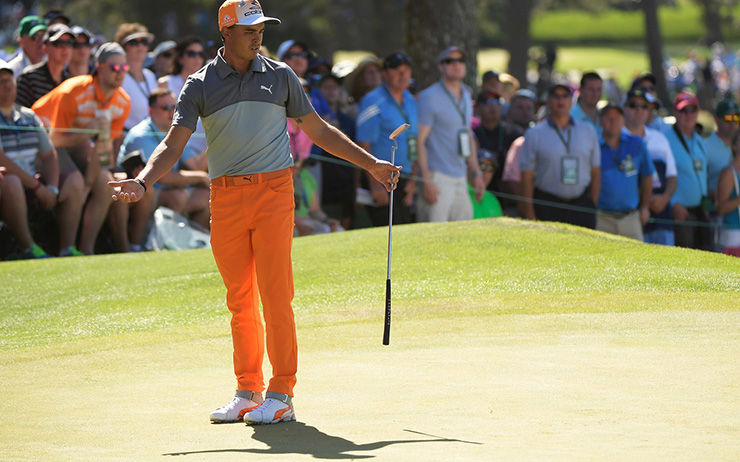 Arnold Palmer and Jack Nicklaus did it another way. They brought out the best in each by trying to beat the other to a pulp, figuratively speaking, with red figures.

Assessment in the aftermath yielded no answers as to their shared malaise. But it wasn’t the pairing, Fowler insisted.

“No, not even close. We had a great time out there,” Fowler said, his eyes, a bit glazed over, betraying the statement. “We were playing together and, yeah, we both could have played better. Jordan finished nicely. If I just finished the way he did, it’s a little different story putting up a decent round today. Bogeying the last three holes didn’t help. I didn’t make anything today. I didn’t make the putts that kind of continued to hold momentum or build momentum.”

Spieth, 23, took ownership of the wreckage. He felt like an anvil around his compatriot’s neck.

“Yeah, I feel bad I went so downhill while Rickie was still in it there, because it is tough when you don’t see a ball go in the hole,” he said. “And when I was out of it, I was his biggest cheerleader, just being a really good friend with Rickie. And it was tough.

“Yeah, I don’t think I helped him whatsoever on the round. And I felt like if I was able to hang in there and we were able to feed off each other, then we would have been able to push through like you saw Sergio and Justin able to do today. We could have definitely done that today. We’re both capable of it, the stage wasn’t too big, it just didn’t quite happen.”

Ten strokes adrift of Charley Hoffman after his first-round 75, Spieth was attempting to join Harry Vardon as the second major champion in history to make up more than a 10-stroke deficit after the first round. Vardon had erased 11 shots to win the 1898 Open Championship at Prestwick.

But after battling back with grit on Friday and Saturday, that seemed lacking come Sunday. He bogeyed the opening hole after driving into the fairway bunker and missing the green, and after a birdie at No. 2, he bogeyed again at the third. He bogeyed the sixth, missed the green at No. 7 after a perfect drive, and failed to birdie the par-5 eighth.

His tournament was over when he bogeyed No. 10, but for good measure, Spieth decided to deposit another ball into Rae’s Creek at 12. Double bogey. Double jeopardy after his foray into the water in 2016.

“Normally, my score kind of reflects how I feel about my round. And today it was just one of those rare cases where it didn’t,” Spieth said, sweat glistening off a boyish face affixed with a wry grin. “I’m telling you, it was so bizarre that I didn’t feel one nerve. I mean, I was, I felt as calm as I’ve ever felt. Now, obviously, I fell out of it and after that you normally do feel calm, the pressure’s not on anymore, you don’t think you can win, but, I mean, I hit so many iron shots right at the sticks and I could name them for you, just so many shots right at the flag stick. Almost every single hole. And they just didn’t come down in the right places, and when they were outside of a five-yard window of where they can land out here, you end up with a tough chance for par and normally I get them up‑and‑down, I didn’t today.”

Fowler was similarly frustrated with his inability to chase the ball into the hole faster. He erased bogeys at Nos. 4 and 5 with birdies at Nos. 3 and 8, but when he failed to birdie the 10th after a beautiful approach to 16 feet, the wheels came off. He bogeyed five of his last seven.

“Every time I chipped it close I missed the putt, or I didn’t chip it close enough and I’d still miss the putt,” Fowler lamented. “So, yeah, somewhere yesterday I was able to fight through that from hitting the ball down, making some good key putts, and really didn’t hit it any worse than I did yesterday. When you’re not able to get the ball up and down out here or make those key five- to 10‑footers, that’s what happens.”

The great Bobby Jones said he learned more from his losses than he did from any victory. Fowler said he needed time to think about it.

“It’s hard to go through it right now,” he said. “I know I tried to fight through it on the front nine. Would have been nice to continue it on the back nine. Maybe I tried to force putts too much. That’s the patience side of it.”

Patience wasn’t Spieth’s problem, either, citing poor chipping and putting – his usual strengths – that dogged him most of the week. He seemed it shock. He wasn’t. “I don’t know if bizarre is an emotion, but that’s what it is. But I’m taking a lot of positives out of the week.”

Sometimes there is no explanation. Sometimes you just chalk it up to a bad day.

But of this much they can be positive: It couldn’t have felt good, and it couldn’t have been much fun. Even with one of your best friends by your side.