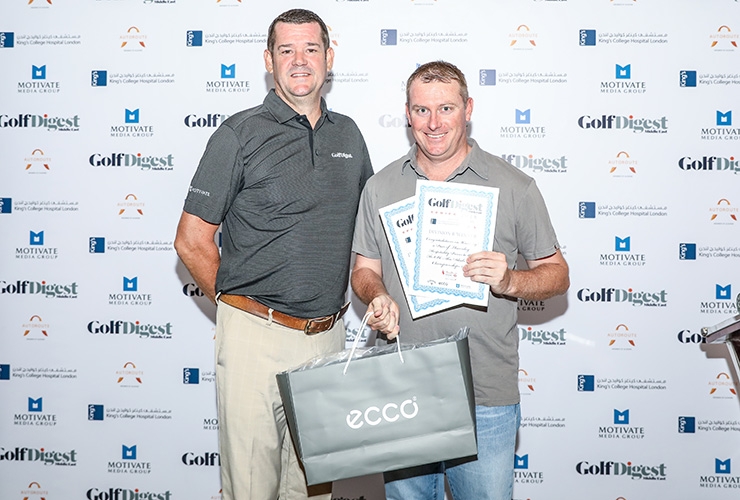 By Kent Gray
With Thomas Bjorn captaining Europe to a sixth successive Ryder Cup victory on home soil, the 11th Golf Digest Middle East Amateur Golf Series is suddenly even more attractive. Just ask Shawn Welgemoed who is now a step closer to a potential tee time with one of the Le Golf National heroes.

It proved a particularly rewarding win. Not only did the Jiggers Golf Society member collect a pair of Thursday hospitality passes to the Abu Dhabi HSBC Championships and a carry bag from support sponsors Ecco, Welgemoed also sealed a start in the 11th Golf Digest Middle East Classic on October 16.

If he can repeat his Saadiyat heroics on the Majlis course at Emirates Golf Club later this month, Welgemoed will earn himself a start in the Abu Dhabi HSBC Championship Pro-Am and potentially a date with one of Bjorn’s victorious Ryder Cuppers. Worst case scenario, the winners of each of the men’s divisions at the GDME Classic will play alongside a European Tour star in either Abu Dhabi or Dubai.

“Winning a spot in the Pro Am at the Majlis will be the highlight of the year,” Welgemoed said. “To be able to play a round with the pros at a major tournament is definitely something most golfers would have on their bucket list.”

A brilliant 200-yard shot from a fairway bunker on the 7th at Saadiyat Beach kick-started  Welgemoed’s qualifying success. He found the green, triggering “a good run of pars and some momentum into the turn.”

“I played pretty consistently and managed to avoid any blowouts which always helps with scoring on a day when the breeze made it challenging,” he said.

“Saadiyat Beach GC was in great condition. The course is challenging but also provides great scoring opportunities if you are accurate off the tee. The greens were in pristine condition which helped with confidence on all those nasty four to six footers.”

Welgemoed won division B by three points from Sami Ghandour whose consolation for second place was nothing to be sneezed at – a pair of season passes for Dubai Rugby 7s.

Daood Jaffal and Ping Li won the division A (0-10 handicaps) and ladies divisions with 39 and 33 points respectively to also qualify for the GDME Classic on October 16 – as well as winning hospitality passes to January’s Desert Swing opener in Abu Dhabi. For the record, the division A winner at the GDME Classic will earn a start in the Omega Dubai Desert Classic Pro-Am, the division B winner a spot in the Abu Dhabi HSBC Championship Pro-Am while the ladies champion will play in the remodelled Omega Dubai Moonlight Classic in early April.

Like Ghandour, the division A runner-up at Saadiyat Beach – Omar Thabit with 36 points – also won a pair of Dubai Rugby 7s season passes.

Miguel Marti and Danny Sprinner each won a pair of Omega Dubai Desert Classic season passes for claiming the longest drive and nearest the pin prizes respectively at Saadiyat Beach.

Click here to play at The Els this Thursday.