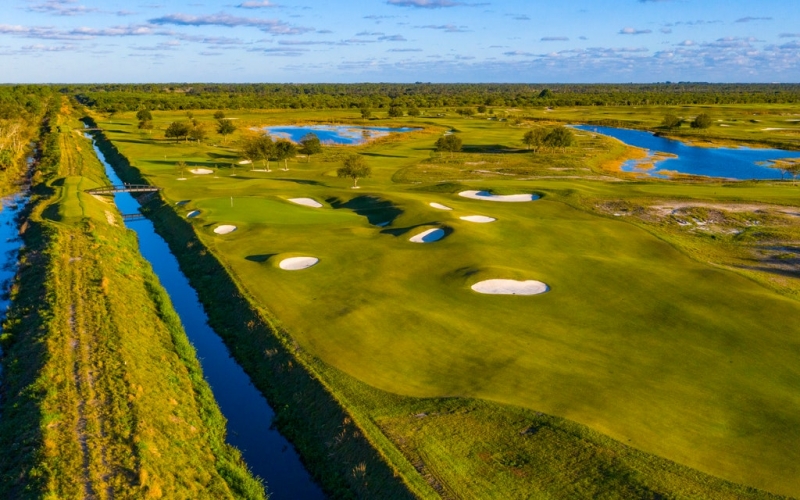 By Derek Duncan
“See that field over there?” Bobby Weed says, pointing toward a few hundred acres of grassland abutting a distant tree line.

Weed is standing outside the nearly completed clubhouse at The Grove XXIII, the uber-exclusive golf course he built for his client, NBA Hall of Famer Michael Jordan (it opened in the fall of 2019), explaining how Shinnecock Hills became the inspiration for the design even though this particular site—formerly a citrus grove near Hobe Sound—is South Florida flat and unambiguously landlocked.

“We started to gradually raise this land where the clubhouse is, and as we did, we realized we had views across the whole course,” he says. “We could see everything.” The vastness of the property and the sandy, grass-covered spaces between the holes reminded Weed and senior design associate Chris Monti of the famed U.S. Open venue on Long Island. A visit to Shinnecock to double-check their instincts confirmed the idea. 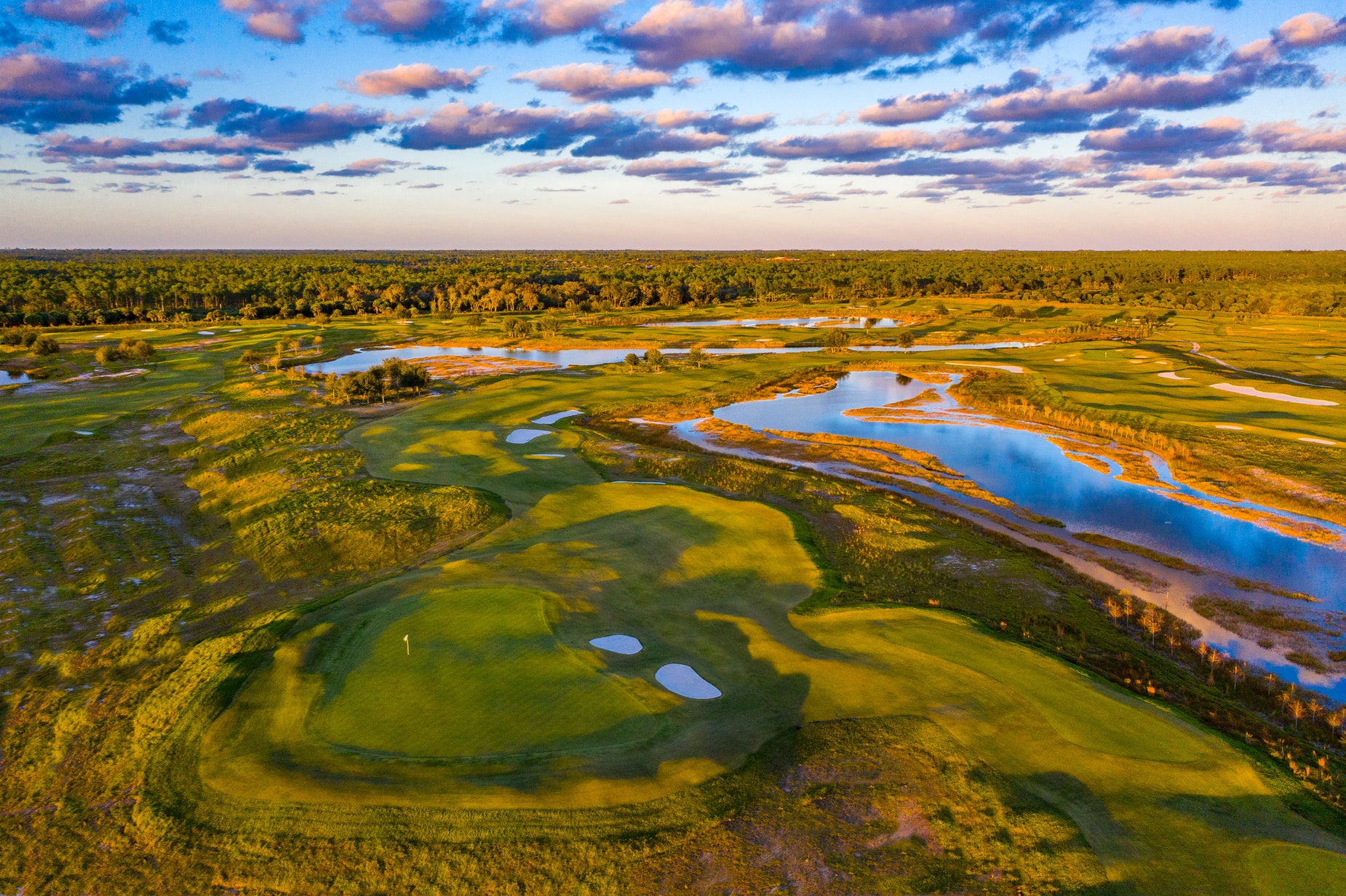 The logic works. Seen from the patio, The Grove XXIII’s holes spool and unspool against the open backdrop of undeveloped pasture—the sea. And from the golf course, the clubhouse is never out of sight, a modernist stand-in for Stanford White’s omnipresent, wood-framed landmark.

The Grove XXIII (the Roman numeral represents the number Jordan wore with the Chicago Bulls) twists in an ingenious double-helix routing that can be played in four nine + nine combinations, and in shorter three- to six-hole loops. The key to the flexibility is the clustering of greens and tees, and a crossover junction after the fourth and 13th holes. Walking off the fourth green, for instance, play can continue on at the fifth, or it can switch over to the 14th and finish in the opposite direction, so each nine can be broken into sections. In fact, it’s possible to play continuous internal circuits without ever returning home, enhancing the likelihood of ongoing presses, overtimes and emergency holes. 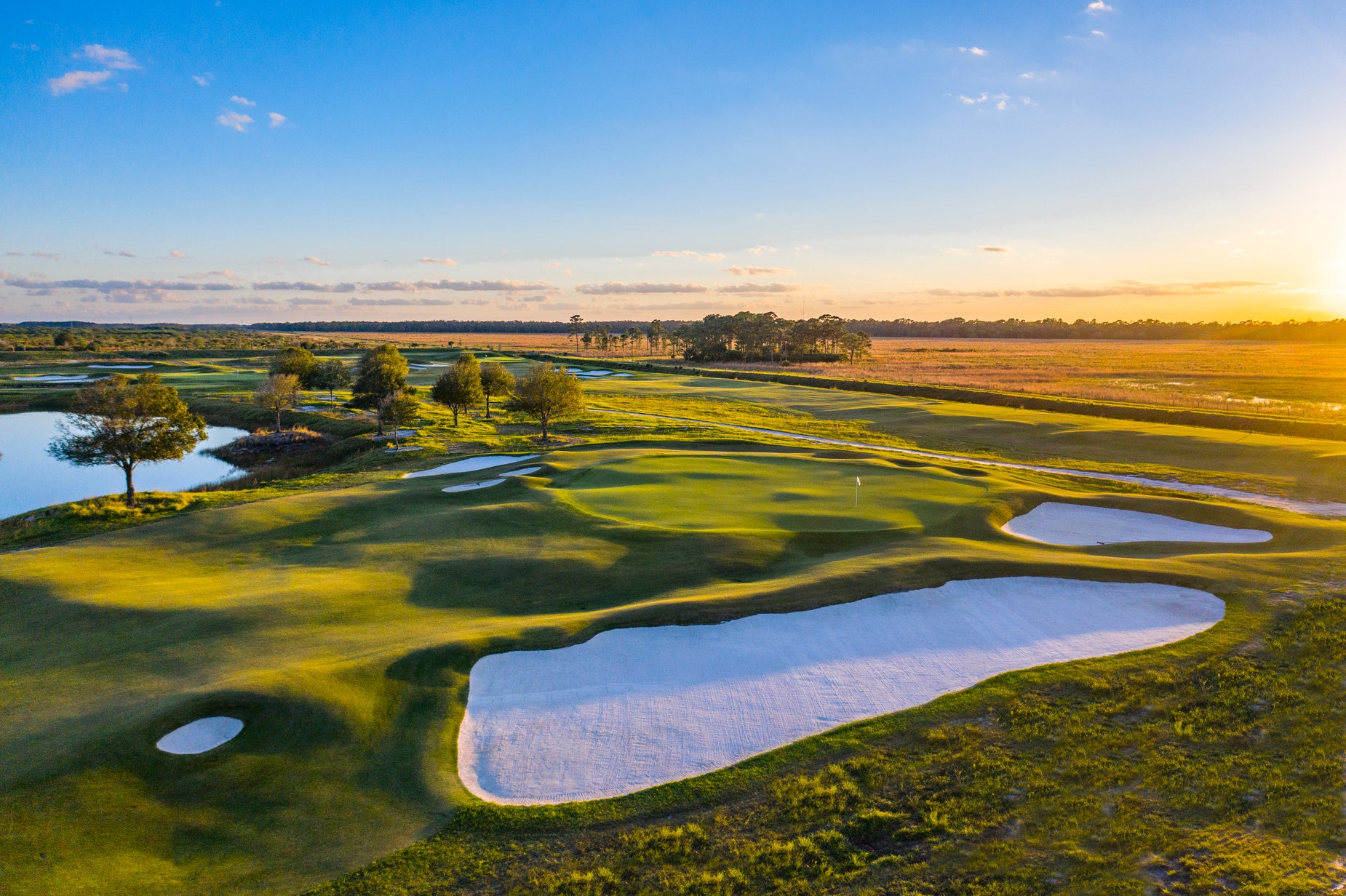 LC Lambrecht
The par-3 13th, playing towards the “sea.”

Architects love to work with nature’s broken lines and irregular shapes, but little of that splendour existed here. Each hole was cajoled and massaged using fill from a chain of lakes that Weed transformed into a marshland habitat. Jordan’s primary requirement that the course play fast and firm with features that produce dramatic matches gave way to broad fairways that glide over dips and swales and melt into low-slung putting surfaces. Watching players putt or bump 7-irons onto greens from 20 yards makes Weed giggle.

In an era when nearly every new and remodelled course bears a naturalistic or faux-historical aesthetic, The Grove XXIII skews clean and contemporary, all short grass and sophistication. Weed’s “collection architecture,” rife with hollows, depressions and shallow scoop bunkers that gather shots, celebrates the centripetal force of gravity. LC Lambrecht
A look behind the eighth green.

There’s certainly nothing pacific about the 15th and 16th, two holes that can quickly flip matches. The first is a par 3, drawing diagonally over a ridge of moguls to a partially blind green kicking everything rightward into a deep chipping hollow. The other, just 260 yards from the regular tees, features a strand of central bunkers separating routes to the hole and a convex putting surface that moves chips and putts in irrational directions. 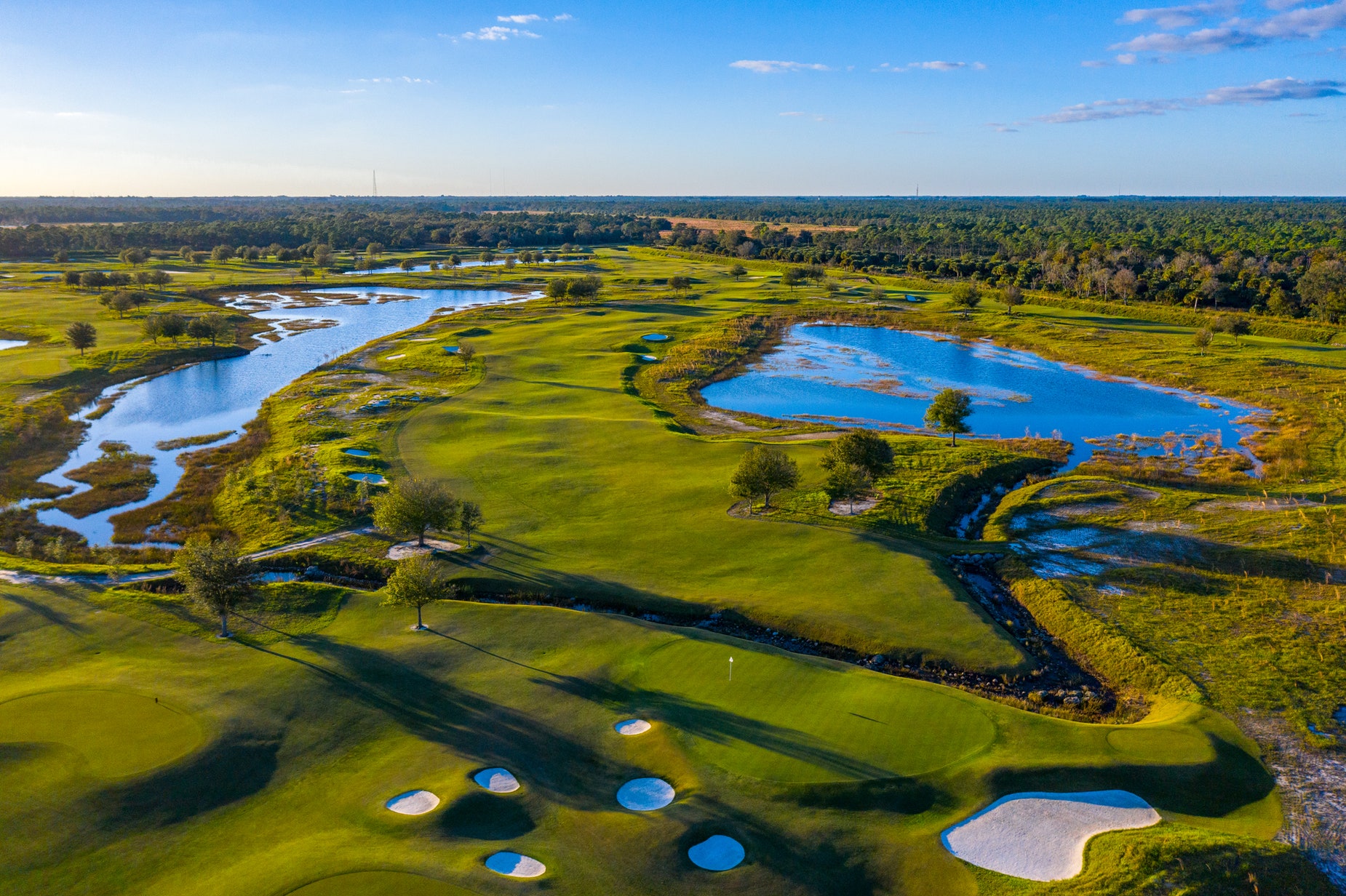 LC Lambrecht
An aerial of the 17th hole.

Although limiting in some ways, the old, agricultural property did offer an unexpected bonus in the form of two deep irrigation canals bordering the north and eastern boundaries. Weed notched slender strips of tees atop the high banks on the opposite sides, using the canals as the rarest of features in American golf: long, dead-straight hazard lines that play like inverted versions of the stone walls at North Berwick in Scotland.

“We kept asking ourselves if we were overdoing it [hitting across the canals],” Monti says, “but then we’d cross to the other side, and it was a better hole from over there.” 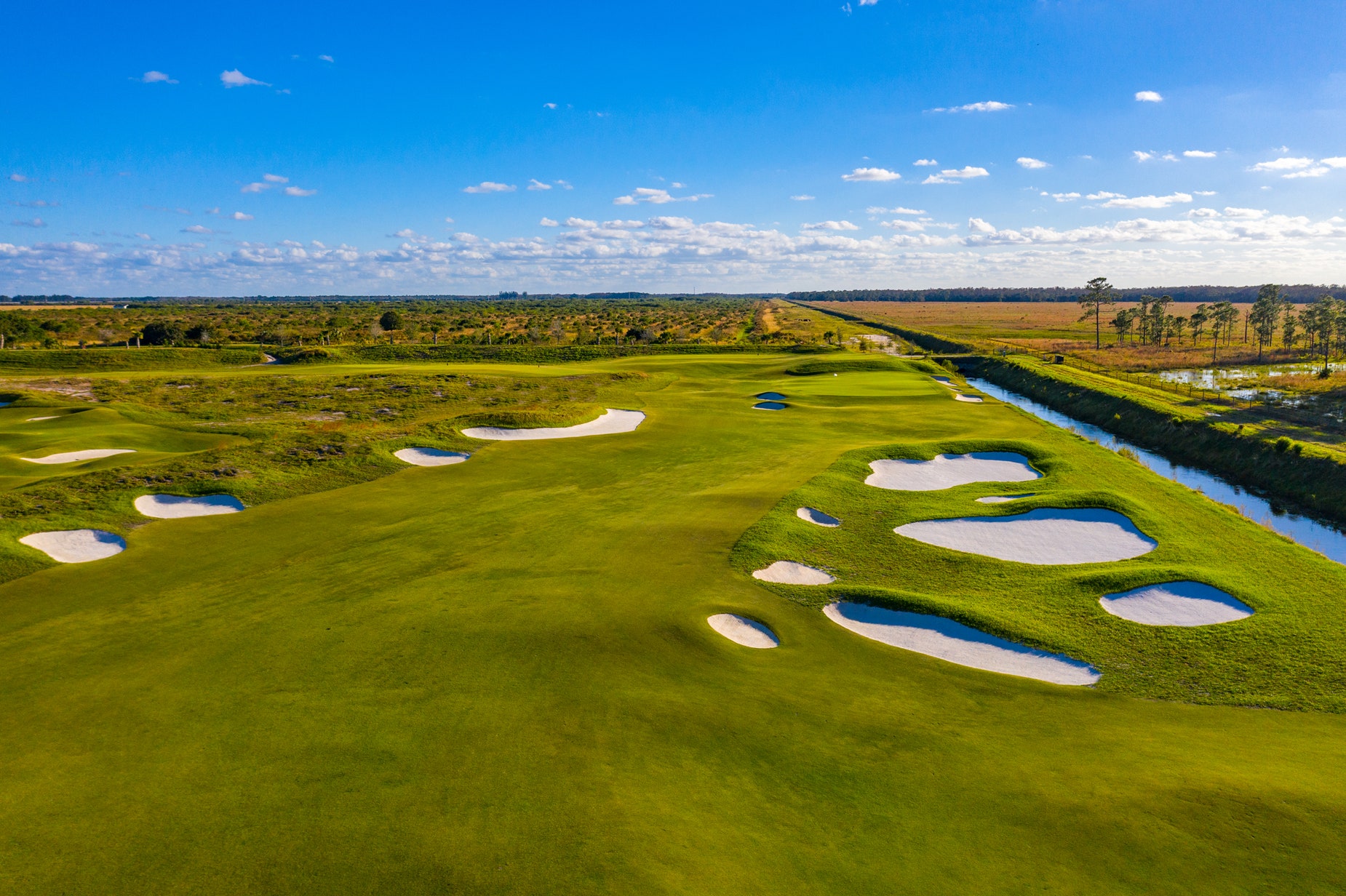 LC Lambrecht
A view from the fifth hole, playing along the canal. 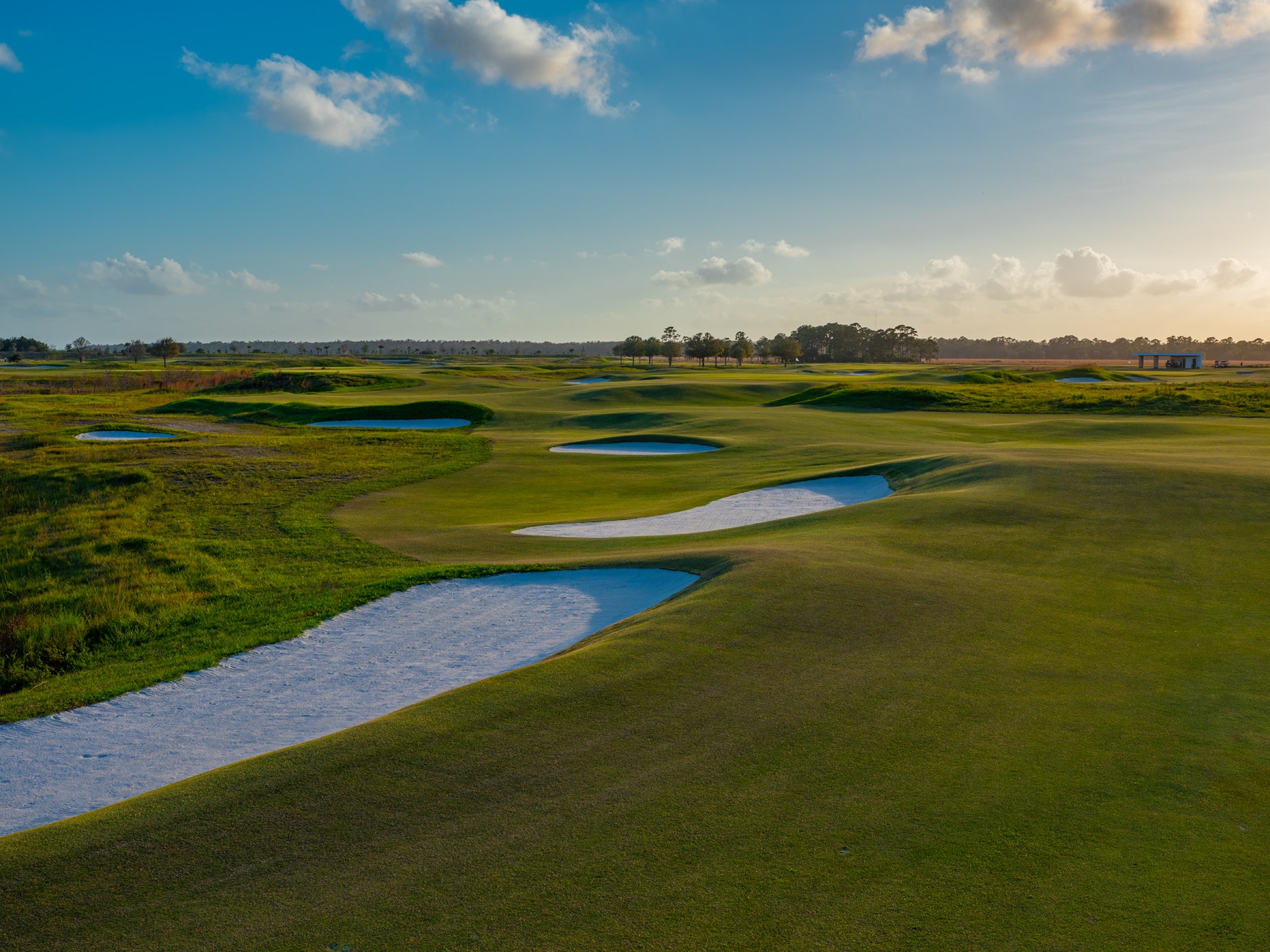 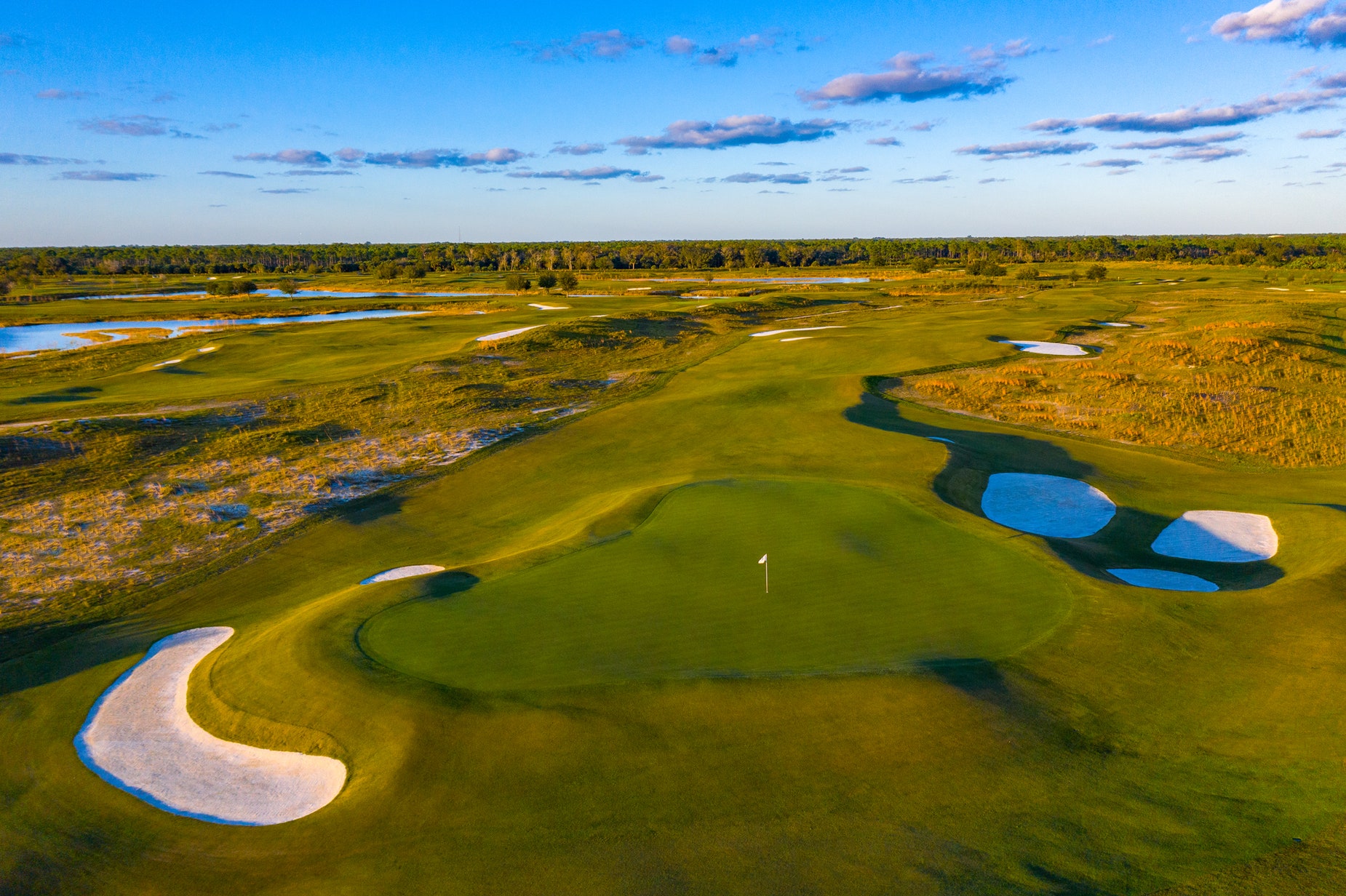 LC Lambrecht
A view behind the 18th green, and its intricate bunkering surrounding the green complex.

The LPGA Tour schedule continues to adjust to the spreading of COVID-19, the latest event to be rescheduled: the U.S. Women's Open.