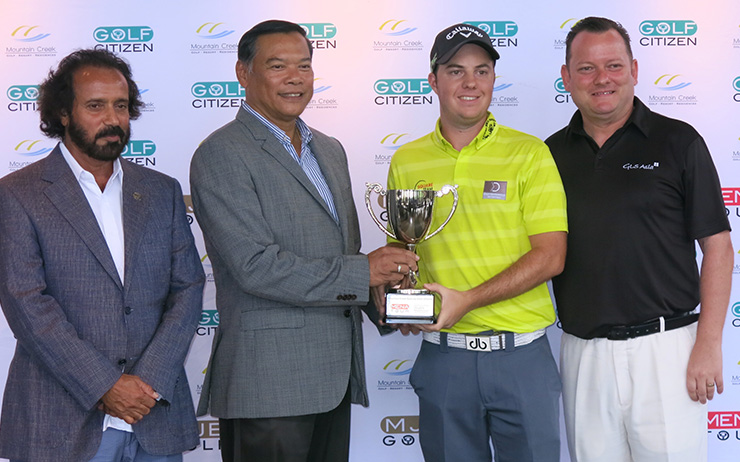 A wire-to-wire waltz on a course designed by the late, great Seve Ballesteros in the golfing kingdom that is Thailand. Lionel Weber couldn’t have scripted his professional breakthrough much better.

The 27-year-old Frenchman produced rounds of 66-67-66 in Korat to finish the $30,000 Mountain Creek Open by Golf Citizen at -17, a staggering seven shots clear of English runner-up Luke Joy (England).

Michael Harradine closed with a level-par 72 to leave the Dubai-based Swiss national team amateur in a creditable three-way share of third at -6 with Englishman Jamie Elson and Scot James Byrne.

Lightning forced the suspension of the final round for 60 minutes but it barely slowed Weber who produced four of his seven birdies Wednesday in his last six holes.

“It was great to be able to play my A game,” said Weber who became the second Frenchman after Edouard Espana to win a MENA Tour event and was presented with the trophy by tour patron, His Excellency Pasan Teparak.

“I had a good final round and I am really pleased to have my first win as a professional here in Thailand. It will give me a lot more confidence for the future.”

Harradine was two under through 11 before a double bogey on the par-4, 15th undermined the 33-year-old’s efforts.

His tally of six-under, however, saw Harradine easily clinch the amateur title by six shots from Thai Worathon Zeng, who finished on level-par 216, as Dubai-based India amateur No.1 Rayhan Thomas settled for third on +3 after returning a final round 76.

“I struggled on the first seven holes but things started to click thereafter and I played a bit more solid. Unfortunately, I lost a ball in the jungle on the 15th and then made a birdie on 16. Finished on level par. You are never happy when you finish the round badly, but overall it was a good week,” Harradine said.

Joy, a two-time MENA Tour winner, made a strong finish, reeling off three birdies in his last four holes en route to a final round 69. But the Englishman’s late surge was not enough to threaten Weber,who was only playing his second MENA Tour event after leading through 36 holes in the MahaSamutr Masters at Banyan GC (where he is an ambassador) before fading to a T7 finish.

MahaSamutr Masters champion Jazz Janewattananond finished solo 10th on -4 after a final-round 70, one behind his Thai compatriot Pattaraphol Khanthacha who finished in a four-way tie for fifth.

Defending champion Wolmer Murillo carded a 71 for a share of 11th on -3 while Tyler Hogarty, the winner of last season’s -1 red numbers on one under, tied for 13th.

The MENA Tour will travel to Chonburi next week for the May 16-19 Pattana Golf Championship, the third and final event on the tour’s Thailand swing and its first 72-hole event.

An initiative of the Shaikh Maktoum Golf Foundation, the MENA Golf Tour was created in 2011 with the aim of developing golf in the region. It is affiliated to R&A and the Arab Golf Federation and enjoys the Official World Golf Ranking (OWGR) status.