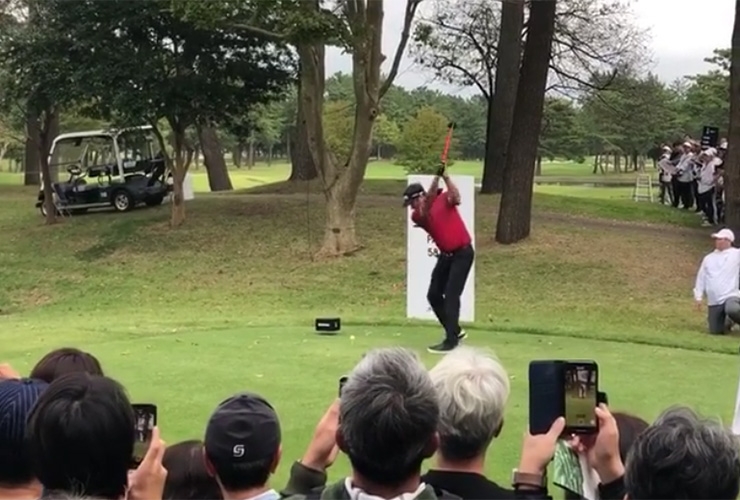 By Alex Myers
“If I’ve got a swing, I’ve got a shot.” Bubba Watson has always played golf with this mentality, and outside of maybe fellow escape artists Tiger Woods and Phil Mickelson, it’s a mantra that fits the ball-shaping wizard better than anybody. But Bubba took that creativity to a whole new level during the final round of the Zozo Championship by attempting—and pulling off—arguably the most ridiculous tee shot in PGA Tour history.

Before we proceed, let’s make it clear that this shot was completely legal—even if it made golf course architects around the world collectively cringe. Watson teed up behind the tee markers on the par-5 sixth hole at Narashino Country Club. He just aimed in a 90-degree angle away from the fairway, sending his golf ball sideways and through a gap between a tee sign and a tree. You have to see it to believe it:

This is the CRAZIEST golf shot I have ever seen in my life!! Wait till the end!!!! @bubbawatson giving a new meaning to cutting the corner on the par 5 @zozochamp ? ? pic.twitter.com/UTHf0nfGl6

What the…? But the graphic at the end actually makes it clear what Watson was trying to do. Have another look at the angle that allowed the lefty to carve his go-to cut slice tee shot on a dogleg right:

Pretty darn brilliant. Bubba Golf forever. Unfortunately, Watson only managed par, but he was still pretty happy with the poke that will have golf courses everywhere scrambling to erect internal out-of-bounds signs.

Not the result I wanted at @zozochamp in Japan this week, but I did have some fun on #6! ? #ShortCut #URwelcome

Yep, this one definitely deserves a “thank you.”