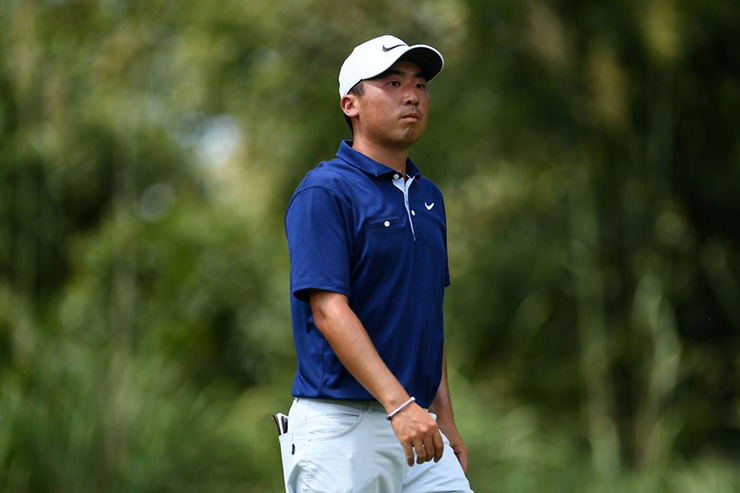 By Ryan Herrington
Indiana’s Victoria National Golf Club, host of the Korn Ferry Tour Championship, has the reputation of being a brute. Earlier in the week, a tweet from Cameron Percy made the social media rounds as the tour pro noted how the participants in his pro-am group had lost 27 balls … in nine holes. Another tweet showed a wooden box with a glass front filled with golf balls on the 18th tee with the word “EMERGENCY” written on it. In 2018, seven of Victoria National’s 18 holes were ranked among the 30 toughest on tour for the season, including the first, second and third hardest.

This was the stage for Monday’s final round of the final event of the three-tournament Korn Ferry Tour Finals Series, and the Golf Channel announcers had viewers bracing for the corresponding carnage that would determine who would get the 25 PGA Tour cards on the line.

If that’s what you spent your Labor Day looking for, however, you were probably disappointed. One by one, the players on the top-25 bubble starting the final 18 holes mostly held up to the pressure of knowing a good day meant they’d be playing for millions in 2020 and a bad day meant playing for, well, not millions.

It started when David Hearn, a 40-year-old PGA Tour veteran, made a par putt on the par-4 18th hole to finish tied for fourth in the event. That moved him up in the Playoff Points standings from 42nd at the start of the week to 13th.

Tyler Duncan was in a similar spot, finishing up with a closing 66 to get to T-4, and move from 41st to 12th in points.

Hank Lebioda made double bogey on the 14th hole, but four pars over the last four holes allowed him to stay at 19th on the points list and return to the PGA Tour.

Chris Baker, an Indiana native with more than a dozen friends and family in the gallery, had just made double bogey on the 17th hole, then hit his drive on 18 into a fairway bunker. But his approach found the green 30 feet from the hole, and his two-putt par meant earning PGA Tour membership for the first time.

Richy Werenski made birdies on the 15th and 16th to finish tied for seventh for the tournament and move from T-53 to T-24 in points.

Happily, then, instead of showing a video of utter despair from a player who missed a putt on the last hole to lose his card, let’s show one of sheer joy for coming through in the clutch to earn a card. The winner here is from Doug Ghim.

The 23-year-old, a former U.S. Amateur runner-up from outside of Chicago, played on the Korn Ferry Tour in 2019 after graduating from the University of Texas in 2018. As he got to the 18th hole on Monday, Ghim had just bogeyed the 17th hole, meaning he had to make par on the last to earn his PGA Tour card. Ghim hit his tee shot in the fairway, but pulled his approach into the rough left of the green. His chip stopped 10 feet from the hole, leaving him with the biggest par putt of his young pro career.

“I have never felt nervous like that before and I’ve been in a lot of nervous situations,” Ghim said. “I [said] yesterday that the only way I’d be devastated is if I had a putt to make it [on the PGA Tour] and I didn’t make it. And that thought occurred when I got there.”

And yet Ghim didn’t flinch.

“To have it all come down to one putt is pretty surreal,” Ghim said. “It’s one of those things where if you make the putt, it does wonders for you and if you miss it, it could go the opposite way. Now that I’ve finally made the putt it feels like I have the opportunity to make some noise on the big tour and I’m just really, really excited.”