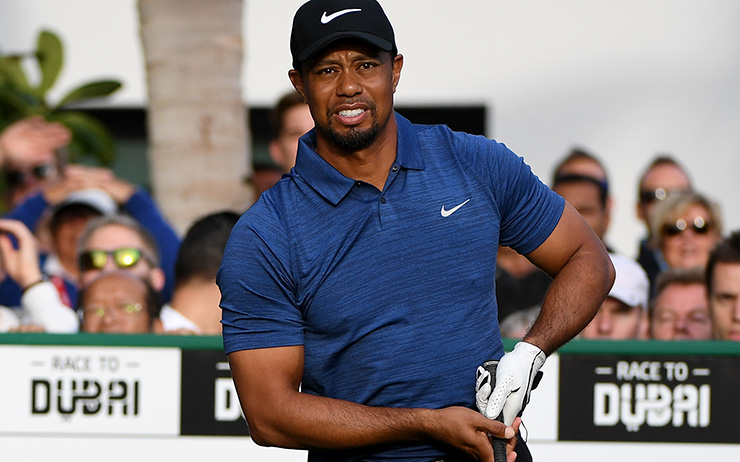 On Tuesday, Tiger Woods announced a new golf course design at Big Cedar Lodge. Called “Payne’s Valley” in honor of the late Payne Stewart, the course features a 19th hole to help settle ties/bets. But on this day, it settled a question: Is Tiger Woods healthy enough to swing a golf club?

The answer is yes, although it wasn’t exactly a vintage performance. Woods took two swings on the 100-yard par 3. Check it out:

.@TigerWoods took a few swings during his course announcement at @BassProLegends. pic.twitter.com/loFG3p7WeS

It’s tough to tell where the shots wound up, but according to people on site, the first one, well, it wasn’t good:

Tiger just hit two shots. There's even video of 'em. First didn't reach the green, but he swung. And remained upright and everything.

No, they’re not. But hey, it’s better than when he dumped three balls into the water at the 2016 Quicken Loans National media day.

Generally, Woods seemed in good spirits during the ceremony which was Periscoped by the PGA Tour Champions. Woods also took some Twitter shots for the cargo pants he was wearing, but he cracked a joke about his jeans in an old photo:

Tiger cracks, the funny part is I still have those jeans. Laughs ensue. You think I'm joking, he adds. Well played, tiger. pic.twitter.com/XkXxP64S7I

Woods last played at the Dubai Desert Classic, shooting an opening 77 before withdrawing before the second round on Feb. 3 with back spasms. The 14-time major champ missed the Masters for the third time in four years and hasn’t indicated when he’ll return. But friend Notah Begay recently said he expects Woods to be back in May ahead of the U.S. Open.