Watch this Euro Tour pro use a boat (yes, a boat) to get to an island and play a recovery shot 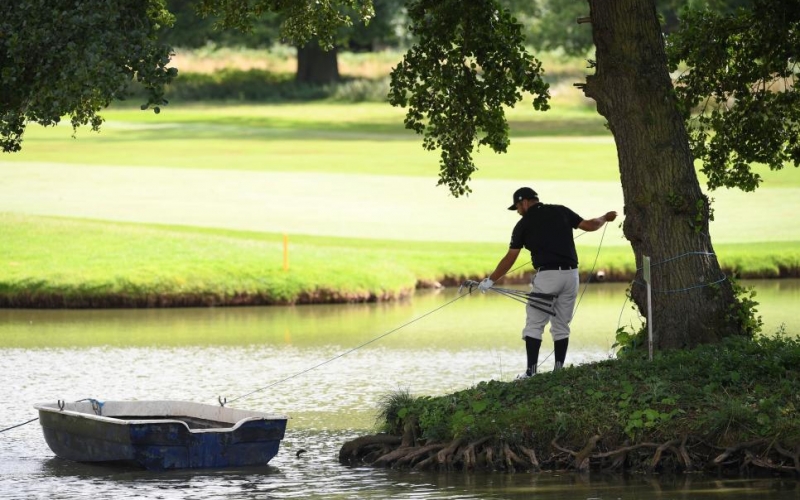 Ross Kinnaird
Joel Sjoholm takes a boat to the island on the 17th hole during the final round of the 2020 Hero Open.

By Ryan Herrington
Every shot counts in golf, as the old saying goes. And so tour pros will often get creative when trying to play a wayward shot rather than take a drop and add a penalty stroke to their score. But we haven’t seen anybody get quite as creative as Joel Sjoholm did during the final round of the European Tour’s Hero Open on Sunday.

Sjoholm, a 35-year-old Swede who was a first-team All-American at Georgia State in the early 2000s, hit his second shot on the par-5 17th hole at England’s Forest of Arden Country Club way right of the green. So far right in fact that it landed on a small island sitting in the middle of the water hazard adjacent to the hole.

Able to see the ball on dry land and noticing a boat beside the green, Sjoholm decided to climb in with a few clubs and go to the island to try to play his third shot. (There are going to be a lot of things in this story where you shake your head, like for instance what is a boat doing adjacent to the hole. The best thing is to sort of ignore the absurdity to it and press on.)

Erm… Not sure how to caption this so we’ll just say what we see. Joel Sjöholm is currently in a boat to go and play his ball from an island 🚣‍♂️#HeroOpen #GolfForGood pic.twitter.com/PcS3vlhERr

After warily getting to the island—his boating skills are a bit wanting—Sjoholm had to do a little work to give himself a reasonable chance at the recovery shot, including taking down some signage. (Also not a strength of his as you can see in the video.)

UPDATE: Sjöholm is terrible at moving signs, but has played his ball from Henderson’s island and made bogey.#HeroOpen #GolfForGood pic.twitter.com/wtW8m9ysEY

Eventually, he played his third shot back over the water, the ball hitting the green and rolling hot of the back side. From there, Sjoholm hopped back in the boat to get to finish up the hole. Sjoholm got on the green with his fourth but two-putted for a bogey.

You’ve done everything right so far Joel, so whatever you do, don’t fall in…#HeroOpen #GolfForGood pic.twitter.com/F7vPZTYvay

After the round, Sjoholm explained his mindset when he decided to take to the water.

“I think I was much more afraid of falling into the water than of me messing up when I got to the island. I saw that some guys were playing quite good around me so I hopefully I didn’t mess something up for them because I took some time down 17. I’m sorry for that but I did what I had to do.”

We have to give a few grades to Sjoholm for this pretty amazing sequence of events:

Sjoholm finished the round with a one-over 73 to come in tied for 22nd, nine shots back of eventual winner Sam Horsfield.