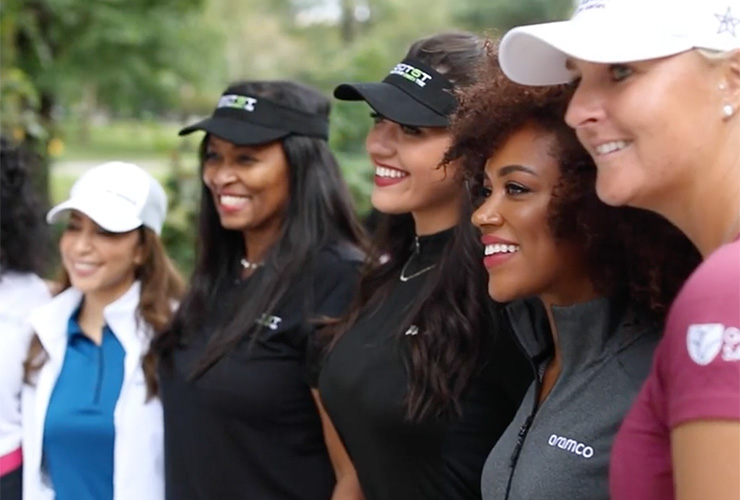 The shoot was promoting The Driving Force presented by Aramco, an initiative aimed at helping further open golf to all and reducing inequality in an attempt to make the sport more inclusive for all.

Nine-time major champion and Golf Saudi Ambassador Gary Player also joined up with Troy Mullins and Girls on the Green Tee at Glen Oaks Club to discuss breaking barriers to entry in golf.

“You need money and sponsor like Aramco here for this event to help break barriers, provide more opportunities and to grow the game,” said Player. 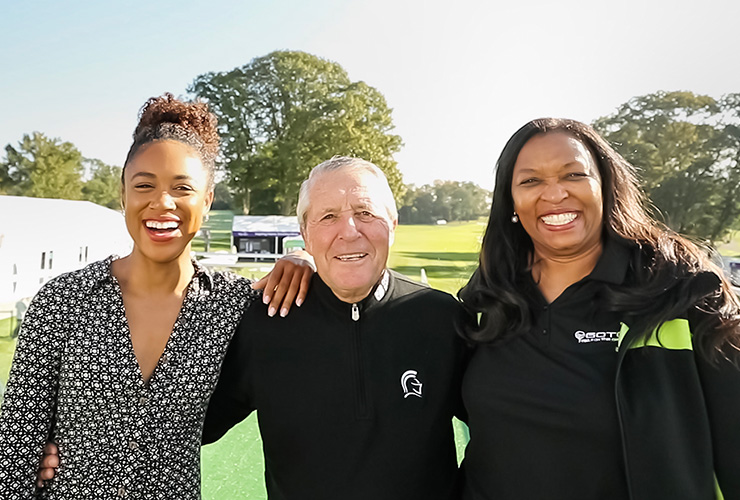 “I want golf to be a game for everyone but there are obviously barriers and challenges. We need golf clubs to invite schools into clubs and early in the morning or late in the day to use the facilities and even provide transport from the cities to get them here regularly. Golf is a way of life. It’s an education. It’s a religion of patience of being a gentlemen and woman.”

New York, October 11:  The Aramco Team Series – New York today launched “The Driving Force presented by Aramco”, an initiative aimed at helping further open golf to all and reducing inequality in an attempt to make the sport more inclusive for all.

Backed by some of the most exciting names in modern golf, The Driving Force presented by Aramco will seek to create a culture within global golf that values, elevates and appreciates involvement from people of all backgrounds.

Around the Aramco Team Series – New York event, organisers will pair up NYC street golf icon Tiger Hood with famed big-hitting long drive competitor Troy Mullins and the Girls on the Green Tee (GOTGT) charity, which aims to introduce young girls to the game of golf and to provide leadership development, character development, self-esteem, confidence, discipline, healthy habits and fitness experiences, through the game of golf.

Together, they will promote the benefits of the game to a national and international audience in the lead-up to and during the Aramco Team Series – New York, in The Driving Force presented by Aramco’s first initiative in what will develop to be a global scheme.

Aramco Team Series director Tom Hogg said: “The Driving Force presented by Aramco is an initiative that we hope helps to keep developing golf around the world, in a way that makes it more accessible and open to all – something that can only be of major benefit to the sport.”

“All four Aramco Team Series events are designed to inspire and attract more women, girls, men and boys into the sport we all love. That invite is open to all, and if there are any obstacles that stand in the way, we as a tournament – and Aramco and Golf Saudi as our backers – will look to take the steps available to help overcome them for the greater good of golf and all those excited by the sport.

“We’ll do this in New York by throwing our weight behind the inspirational ‘Girls on the Green Tee’ charity with the support of two of the coolest names in golf right now, Tiger Hood – who has created a form of street golf never seen anywhere before – and Troy Mullins, who through her long-driving alone, has become a modern golf icon.”

The Aramco Team Series is a brand-new concept and the first team event series on any professional tour, where the world’s best compete in concurrent team and individual contests.

The New York event is the third leg of the four-tournament Series and heads States-side following successful events in London (UK) and in Sotogrande (Spain) – a tournament that saw the USA’s Alison Lee secure her maiden professional victory with triumph in the tournament’s individual format.

The innovative $1million Aramco-backed event sees teams of four battle it out for a share of an $800,000 prize fund, with a $200,000 purse for the leading individual scores over the weekend. As a full LET event, each tournament also carries World Ranking and Race to Costa del Sol – LET’s season-long competition to crown Europe’s leading lady golfer – points.

Backers Aramco and co-organizers Golf Saudi seek to have the Series inspire more women and girls into the game and use each leg of the tournament – which heads to Jeddah, Saudi Arabia, following New York – to leave a legacy they hope will bring benefit to golf in the long run.

Ahmed Al-Subaey, Vice-President of Marketing, Sales and Supply Planning at Aramco, said: “The Aramco Team Series is all about doing things differently: taking a fresh approach to golf, how it’s played and enjoyed – from the top level down. The Driving Force presented by Aramco initiative is a product of that philosophy, which aims to make golf more accessible for everyone. We hope to introduce more young people to the game and make it easier than ever to get a club in your hand, no matter your background or where you’re from.”